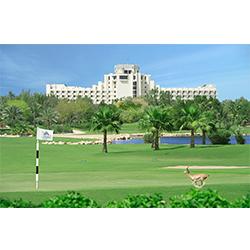 Ahead of the Omega Dubai Moonlight Classic from the 1st to the 3rd of May 2019, JA Resorts & Hotels continues its support to the world of golf, with four official golf ambassadors retained in 2019.

JA Resorts & Hotels has a long-standing association with many sports, but particularly golf, as JA The Resort in Jebel Ali is home to a 9-hole, par 35 championship standard golf course with floodlit driving range, putting and pitching greens and The Leadbetter Golf Academy Dubai. The course is well known as a local practice facility for professional and aspiring golfers, as well as a top choice for holiday makers, bleisure seekers and corporate groups engaging in golf clinics. JA Resorts & Hotels is also a long-time partner and sponsor of the Omega Dubai Desert Classic,

This year, ahead of the Omega Dubai Moonlight Classic, two young sportswomen are proud to be official JA Resorts & Hotels ambassadors. Amy Boulden is the 25-year-old swinging sensation from Llandudno, Wales. Following in her pro golfing father’s footsteps, Boulden first teed off at the tender age of five, spending weekends and free time on the greens honing her skills. Taking her passion for the sport to another level, she began playing in amateur competitions representing her home country of Wales and helping her team to win the Home Internationals. Making her debut as a pro in 2014, she enjoyed a winning streak in the UK and took home Rookie of the Year at the Ladies European Tour in 2014. She made the Top 5 in the French Open 2016 and came in 4th in the Thailand Open 2017.

Also born to a golf pro father, 23-year-old German Olivia Cowan is one to watch on the global golf scene. The young professional first made her mark after securing fourth place in the individual tournament at the 2014 Youth Olympics in China, the best result for a European player. Cowan also won the order of merit on the 2015 LET Access Tour qualifying as a LET rookie for 2016. Known for her fearless approach to the greens, Cowan is no stranger to the courses in the UAE after competing in the Omega Dubai Ladies Masters in 2016.

Rafa Cabrara Bello is the renowned Spanish golfer and a regular face at the world’s most prominent tournaments. As a long-term resident of Dubai, he can often be seen practicing and enjoying a few rounds at JA The Resort, Jebel Ali. After his success playing for the European team in the Ryder Cup, he won the Omega Dubai Desert Classic in 2012 and the 2017 Aberdeen Asset Management Scottish Open as part of the lucrative Rolex Series on the European Tour. This propelled Rafa into the top 20 players in the Official World Golf rankings.