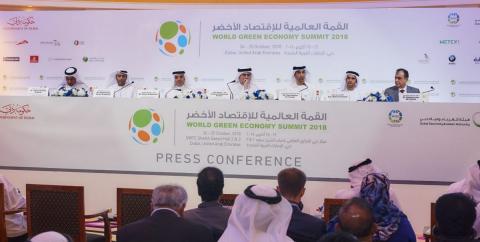 In press conference to announce completion of preparations for summit:

The organising committee of the fifth edition of The World Green Economy Summit (WGES) 2018 held a press conference yesterday (Monday, 15th October) in Burj Al Arab to announce its readiness for holding the summit which support the UAE’s efforts in sustainable development and consolidates Dubai’s position as the global capital of green economy.

Held under the patronage of HH Sheikh Mohammed Bin Rashid Al Maktoum, Vice President and Prime Minister of the UAE and Ruler of Dubai, the fifth edition of WGES 2018 is set to be held on 24-25 October at Dubai International Convention and Exhibition Centre under the theme ‘Driving innovation, Leading change’. 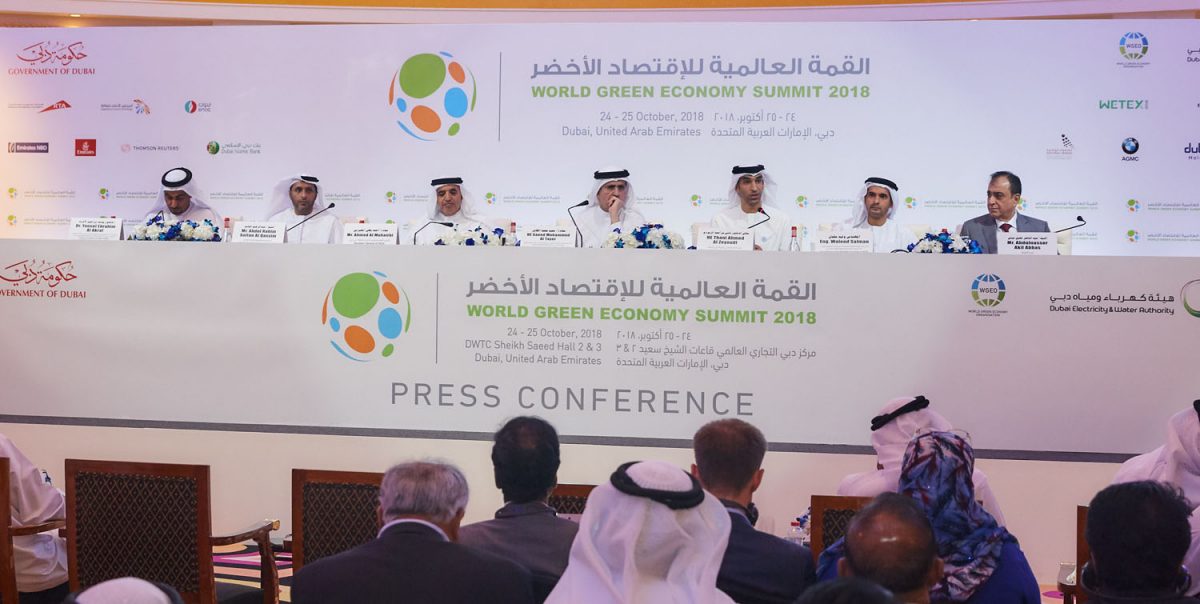 The press conference was attended by HE Dr. Thani Bin Ahmed Al Zeyoudi, UAE Minister of Climate Change and the Environment and HE Saeed Mohammed Al Tayer, Vice Chairman of the Dubai Supreme Council of Energy (DSCE), Managing Director and CEO of DEWA, and Chairman of WGES. It also witnessed the presence of HE Ahmad B. Al Muhairbi, Secretary General of DSCE along other government and private sector officials. 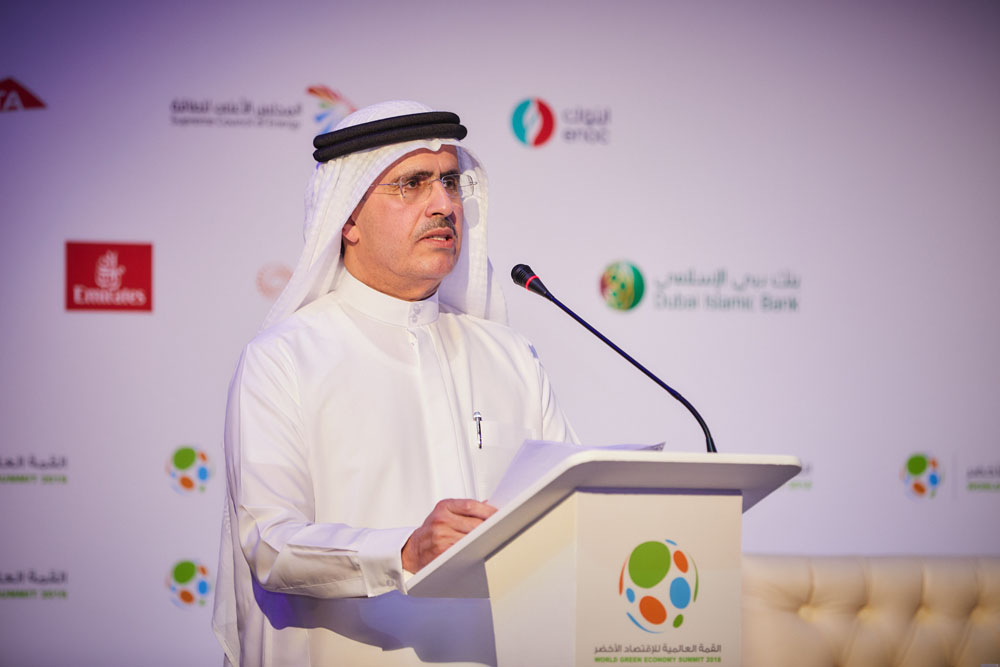 During the press conference, HE Saeed Mohammed Al Tayer announced that the summit will be attended by prominent leaders including HE Francois Hollande, former President of France; HE Dr. Thani Al Zeyoudi, Minister of Climate Change and Environment, UAE; HE Thoriq Ibrahim, Minister of Environment and Energy, Maldives; Nezha El Ouafi, Secretary of State to the Minister of Energy, Mines and Sustainable Development, in charge of Sustainable Development, Morocco and Christiana Figueres, Former Secretary General, UNFCCC along an elite of global experts, thought leaders and executive officials in green economy and sustainable development. 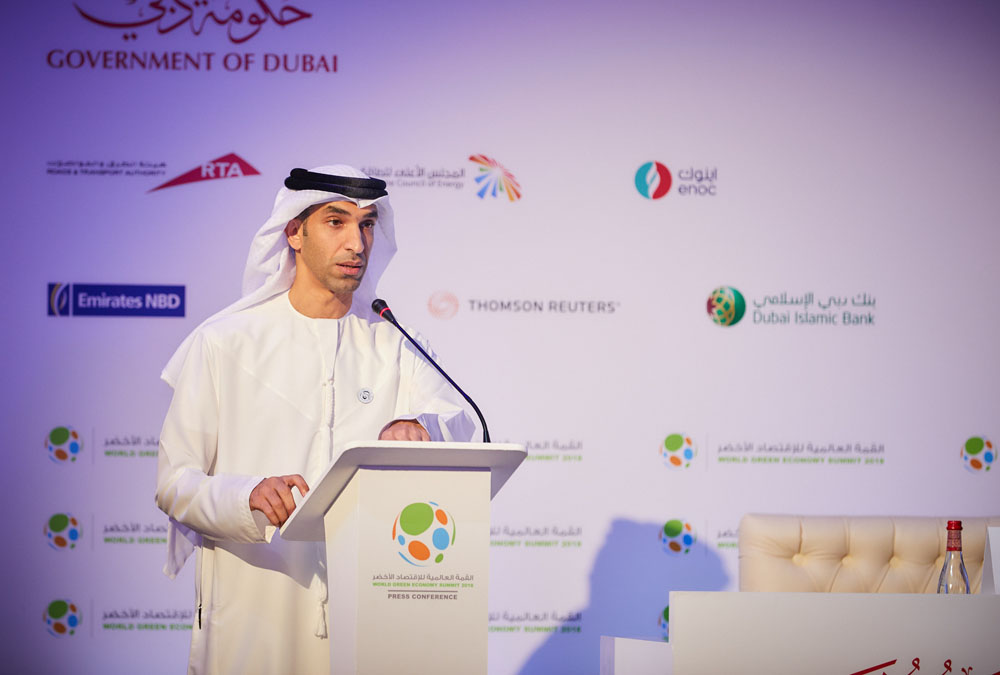 During the press conference, HE Dr. Thani Bin Ahmed Al Zeyoudi underscored the role of World Green Economy Summit in maintaining a sustainable environment to support long-term economic growth, in accordance with the directives of HH Sheikh Mohammed bin Rashid Al Maktoum, Vice-President and Prime Minister of the UAE and Ruler of Dubai. HE also acknowledged the contribution of Dubai Supreme Council of Energy in accelerating the country’s competitiveness with innovative initiatives that position Dubai as a global capital for the green economy in line with His Highness Sheikh Mohammed bin Rashid Al Maktoum vision.

HE Dr. Thani Bin Ahmed Al Zeyoudi stated that WGES is a strategic platform, that facilitates exchange of knowledge and innovation, which not only helps protect the natural resources, but also strengthen Dubai’s competitive position in global markets, particularly in the areas of renewable energy.

Al Zeyoudi noted that The World Green Economy Summit, has boosted collaboration between the public and private sectors, as well as encouraged cooperation from the millennials and youth.

He added that the launch of the Climate Innovations Exchange (CLIX), is one such effort, which connects young entrepreneurs and investors to help drive sustainable climate change solutions.

According to Al Zeyoudi, CLIX aims to support and enable the sourcing and funding of climate change solutions and technologies for young entrepreneurs to provide millions of dollars of investment for the most innovative young green entrepreneurs.

The Minister of Climate Change and the Environment expressed confidence that the fifth edition of the Summit will further enhance international partnerships, encourage investments in green projects and oversee the introduction of efficient policies and procedures to foster the growth of the green economy.

“The World Green Economy Summit is a strategic platform and a vital initiative that attracts participants from all over the world to discuss all aspects of the green economy with an aim to develop a collaborative framework to make positive changes and urge everyone to efficiently contribute in achieving an international consensus to building a sustainable green economy,” HE Al Tayer said.

“Sustainability and green economy are of utmost priority for all of us and there is an international consent that the shift towards green economy is the way forward to a brighter and prosperous future, and the UN Sustainable Development Goals 2030 play an instrumental role to put the framework in place to achieve this transition. Achieving these goals give us an opportunity to build a positive future as well as provides a foundation for the implementation of green strategies to accelerate the green growth,” HE Al Tayer added.

“This Summit that started as a specialised conference for green economy became one of the most prominent events locally and globally. We are delighted that Dubai is hosting the fifth edition of The World Green Economy Summit, which is in line with the directives of His Highness Sheikh Khalifa bin Zayed Al Nahyan, President of the UAE, and His Highness Sheikh Mohammed bin Rashid Al Maktoum, Vice President and Prime Minister of the UAE and Ruler of Dubai to boost sustainable development in the UAE and consolidate Dubai’s position as a global capital of green economy. These support the UAE Centennial 2071, that aims make the UAE to be the best country in the world by 2071,” HE Al Tayer said.

“Additionally, the Summit support the UAE Vision 2021, Dubai Plan 2021 as well as our continuous determination to achieve the goals of Dubai Clean Energy Strategy 2050, which intends that 7 percent of Dubai's total power output will come from clean energy by 2020, 25 percent by 2030 and 75 percent by 2050, such that Dubai becomes a global hub for green economy,” he said.

“Since its establishment in 2014, The World Green Economy Summit has focused on major pillars aiming at accelerating economic growth, while taking into consideration preserving the environment, HE Al Tayer pointed out.

“The World Green Economy Summit facilitates the co-operation and exchange of expertise and knowledge among international and regional enterprises and organisations from the public and private sectors to enhance the transition towards green economy. To achieve these goals, the fifth edition of WGES will be attended by prominent global leaders,” he said.

“The Summit will also include insightful sessions led by prominent speakers from China, France, Italy, South Korea, UK and many others to establish a clear framework that facilitates green policy programs and innovative strategies that will achieve the global sustainability agenda across the globe,” he added.

“The Summit will also attract many speakers this year including CEOs, managing directors, entrepreneurs, and local, regional and international leaders. This year, WGES will drive new ideas and technologies. It will comprise of 20 insightful sessions, led by more than 100 prominent speakers, including local, regional and international speakers from different sectors, and supported by more than 15 partners and sponsors,” HE Al Tayer emphasised.

“Bringing together more than 3700 participants, including thought leaders, experts and representatives from various green economy and sustainable development sectors such as administrations, partnerships, financing, innovation and global markets, The World Green Economy Summit will discuss innovative strategies to achieve the global sustainability agenda to further boost the position of Dubai as Capital of Green Economy and strengthen the UAE’s efforts in this regard,” he added.

“The Summit this year will highlight three key pillars of the green economy, focusing on green capital, digital transformation, and leadership and social engagement. It will discuss the latest smart technologies and digital breakthroughs that accelerate green growth and sustainable development to ensure the shift to a green economy,” he added.

“The past few years have been extremely important for the UAE and the world, and while the foundation for a positive step has been placed, the transition to green economy will not be possible without the cooperation of all the concerned parties.  I therefore encourage all parties get together and embrace our belief in a greener future to forge a new development roadmap, and to find new engines of sustainable growth, HE Al Tayer concluded.

HE Al Tayer concluded by thanking WGES’ sponsors for their continued support to the summit. He also thanked members of the organising committee and various media members who are playing a prominent role in supporting WGES since its inception.

WGES 2018 will be held in conjunction with the Water, Energy, Technology and Environment Exhibition ‘WETEX 2018’, as part of the Green Week activities in Dubai.