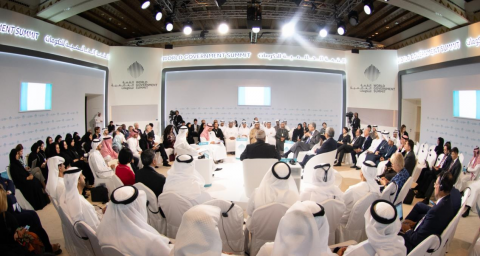 Against the backdrop of the Fourth Industrial Revolution and unprecedented technological changes, it is imperative that governments develop digital infrastructure that will not only reduce costs but also improve overall productivity. This was the key takeaway at a panel discussion at the World Government Summit (WGS).

The panel discussion, moderated by His Excellency Dr Abdulrahman Al Hamidy, Director General and Chairman of the Board of the Arab Monetary Fund (AMF), focused on ‘Investing in Digital Economy: The New Approach for Development Funds’. The session shed light on the new approach for regional development in the digital space, reinforcing the role of private sector and non-state actors in further accentuating the strategy.

In his comments during the panel, Fahad Al Mubarak, ex-Governor of Saudi Arabian Monetary Agency, said: “The Kingdom of Saudi Arabia has invested heavily in digital infrastructure – and what we see in the country is phenomenal. The mobile penetration in the kingdom is 132%, nearly 83% of the population are internet users, we have 100% coverage in all villages and we have a huge program to expand broadband to all homes by 2025. The importance of digital infrastructure in reducing cost and improving productivity cannot be understated.”

Building on the comment, Liqun Jin, President and Chairman of the Asian Infrastructure Investment Bank (AIIB), said: “While digital economy needs infrastructure, what is also important is to educate everyone so that they can benefit from the digitalization. By incorporating digital technology in developing smart cities, we will have a more cost-effective and efficient world. The overall mindset has to change – to incorporate new technologies in traditional economic activities.”

In his comments, Ferid Belhaj, Regional Vice President, Middle East and North Africa Region at the World Bank Group, said: “By 2050, we will have 300 million youths seeking jobs in the Middle East and North Africa alone. While this is a tremendous opportunity, this also poses a huge challenge. We can seize the opportunity by opening our economies and leapfrogging to a new horizon. But what is important is to develop the human capital and building the digital infrastructure is fundamental to achieving this.”

Reinforcing the role of development funds in this domain, Mohammed Saif Al Suwaidi, Director General, Abu Dhabi Fund for Development, said: “Unless we have the infrastructure platform, no digital economy will thrive – and everything else will follow suit. We have to become digital and there is no turning back and hence developing the digital infrastructure is a top priority.”

Abdulhakim Elwaer, Presidential Advisor at the Islamic Development Bank, said: “The needs of countries to achieve digialization is well understood and the need of the hour is to bring innovators on a common platform to come up with smart ideas and solutions. If we are to achieve the sustainable development goals, which will require more inclusiveness in order to ensure greater productivity, digitalization is the only way forward.”

As part of the deliberations that followed, Al Mubarak sounded a warning note on the consequences of digitalization. Enhanced emphasis on a digital economy could lead to people becoming redundant in the long-run, he said, adding that it is vital that countries reskill people in other vocations and safety nets be developed so that the youth of tomorrow are not overexposed or made irrelevant as a result of digitalization. The three-day World Government Summit 2019 runs until February 12 at Madinat Jumeirah in Dubai. The landmark event has convened more than 4,000 participants from 140 countries, including heads of state and governments, as well as top-tier representatives of 30 international organizations