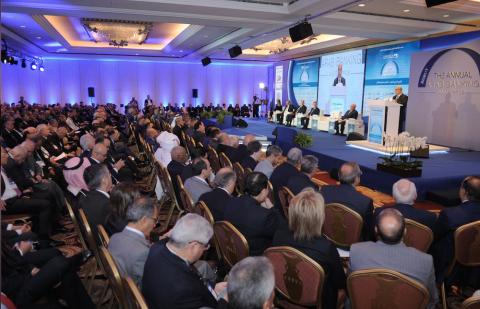 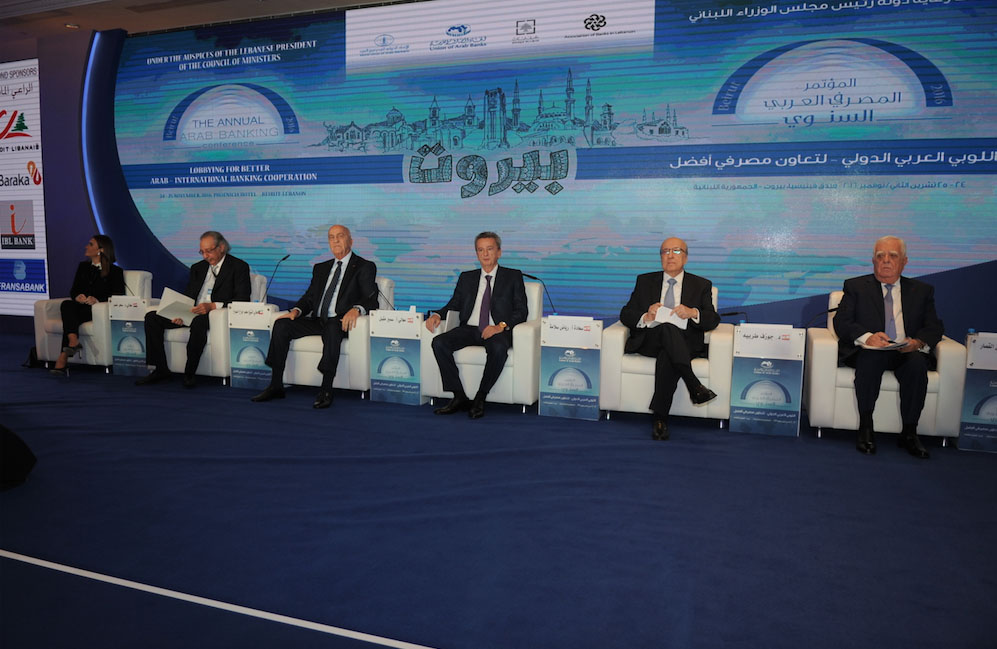 After both the Lebanese and the Union’s anthems, His Excellency Sheikh Mohamad El Jarrah Al Sabah, Chairman of the Union of Arab Banks, launched the opening ceremony, by saying that “wars, crises, the refugees’ crisis, terrorism and disputes have destroyed our cities, foundations and the Arab economies and led our region to the unknown in an aim to search for peace and stability.” He continued by saying that “the Arab banking sector is able to make peace through the construction and reconstruction and through getting the economy and investments moving, especially that it has huge human and financial capabilities, along with a special international trust, since it makes sure to apply and achieve the international standards.” 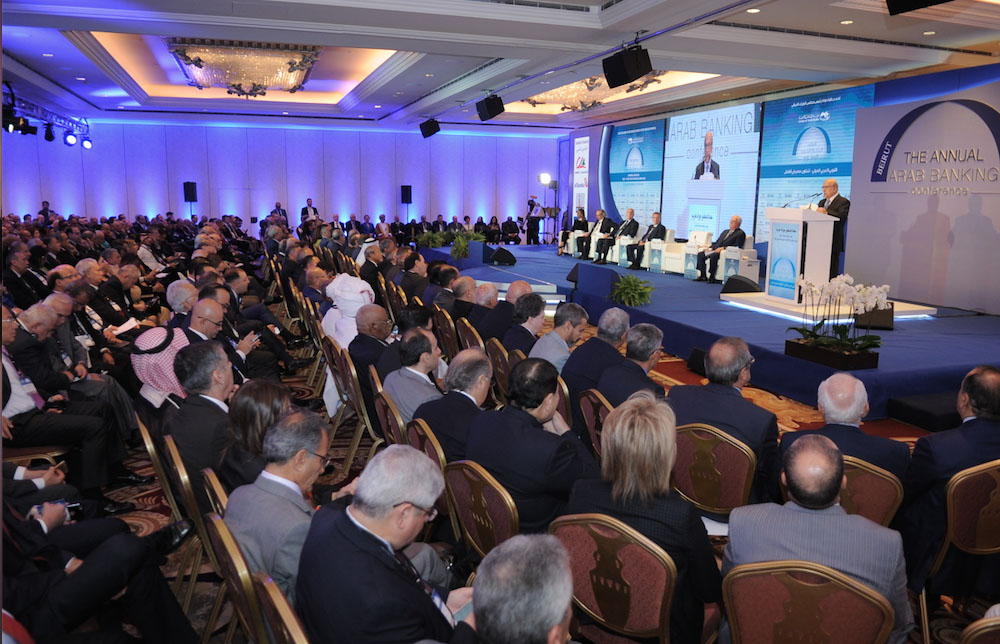 Afterwards, he invited Arab banks to “put their hands together and join all their capacities and investments because integration expresses the concept of interaction and respects the independence of every party, far from the ideologies of domination and subordination”. He ended his speech by announcing the conference to boost investments in Palestine titled “Investing in Palestine” and organized by the Union of Arab Banks in the Jordanian capital in February 2017.

As for Dr. Joseph Torbey, Chairman of World Union of Arab Bankers and the President of the Association of Banks in Lebanon, he spoke about the challenges of the economic sector saying: “the economic result of all the wars happening in many Arab countries puts us in front of a high number of challenges related to the political, corporate, economic, social and humanitarian reconstruction. The problems and difficulties facing our banking sector are at the same time an opportunity to redefine a new role that helps boost the growth, stir the economic drivers of change and affect through financing the construction of knowledge economy, innovation, technology, environment and sustainable energy, in order to prepare our people to build a better future”. He ended his speech by inviting Arab countries to develop the cooperation between them in order to ensure the economic growth in the region.

His Excellency Mr. Adnan Kassar, the President of the Lebanese Economic Organization, also said: “the resistance of the Lebanese economic sector in front of the crises is the result of the solid banking system, founded on the financial engineering put by the Governor of Banque du Liban Mr. Riad Salamé and the engagement of Lebanon towards transparency and international financial systems”. He ended his speech by saying: “what we need is to find a structured Arab banking conglomerate that helps defining the international banking policies, in order to be more present on the international economic banking plateform”.

His Excellency Mr. Riad Salamé, the Governor of Banque du Liban, said: “Lebanon has kept his financial capabilities in different currencies despite the political and security difficulties it faced. The reserves of Banque du Liban have reached their highest in history in September 2016, and the deposits have increased to an annual average of around 5%. The latest policies of Banque du Liban played a major role in preserving the credit stability and supporting the stability of the Lebanese Pound”. He continued by saying: “Banque du Liban encourages banks to give loans in Lebanese Pound in order to make our currency a tool for the economic growth. We expect to have in 2016 a growth rate ranging between 1.5 and 2% with 0% rate of inflation. Banque du Liban will continue supporting digital knowledge economy and it started collecting results three years only after issuing the circular 331”.

At the end, His Excellency Mrs. Sahar Nasr, the Minister of International Cooperation of the Arab Republic of Egypt, said that “the challenges facing the Arab world urge us to put our hands together fast in order to fight all the problems, achieve stability and security and fight terrorism. We stress on the need to boost our regional structure in order to achieve the sustainable integration. In the short term, we can develop regional vital projects related to water, energy and transportation that can make a change”. She finished by saying: “We look forward to put a specific plan with a timetable to revive the economy in the Arab region.” 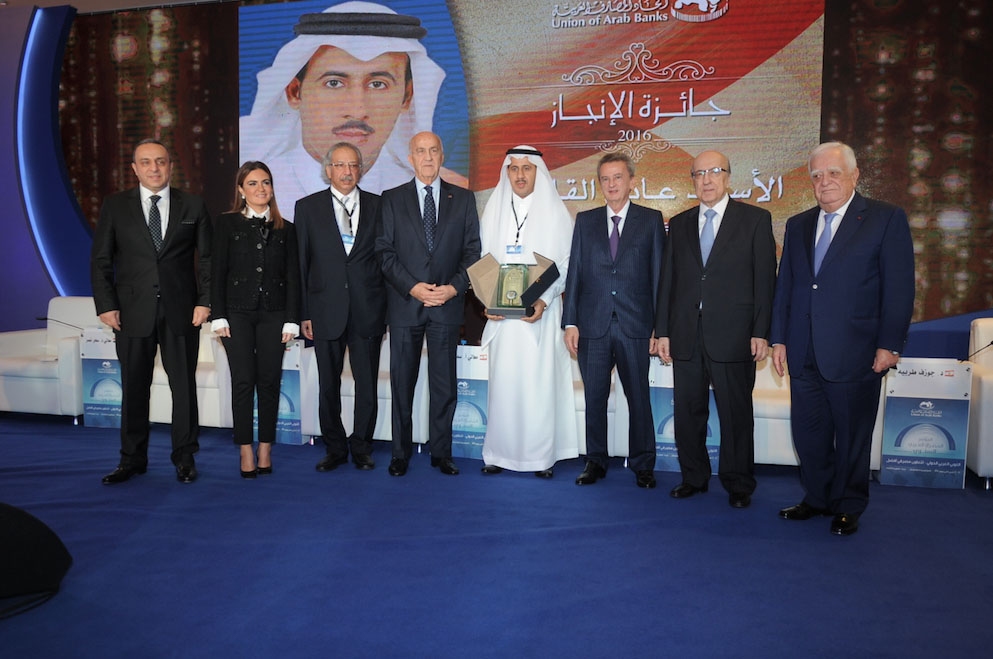 After the opening ceremony, awards were handed to the winners of the “Leadership Visionary Award 2016”, before launching the exhibition accompanying the conference. The first day of the conference included two sessions titled: “The impact of the Arab and international political developments on the Arab banking sector” and “Why an Arab Banking Lobby?” where the economic reasons to create a banking conglomerate were discussed.

The conference “Lobbying for Better Arab – International Banking Cooperation” continues in its second day on Friday, November 25, 2016, where the closing remarks will be given to wrap up the annual Arab banking conference for 2016.