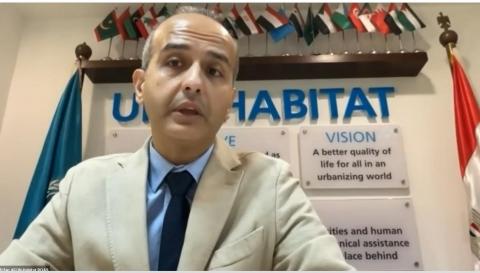 The project of nearly USD 14 million, entitled “Resilient Water Solutions Against Climate Change in Jordan and Lebanon” which is funded by the Adaptation Fund, will run for four years. It is implemented in partnership with the governments of Lebanon and Jordan, through their ministries of environment as well as local authorities, civil society and private sector.

“Lebanon is facing water scarcity due to many challenges – Including unplanned urban expansion that infringes on green and agricultural spaces, as well as, the absence of planning and outdated infrastructure. This project comes at a time when Lebanon is experiencing a severe economic and social crisis. The activities of this project will provide farmers, local authorities, and all those working in the fields of agriculture and water in the central Bekaa area with knowledge on sustainable water management techniques that could support income generation,” said Nasser Yassine, Lebanese Minister of Environment

In Lebanon, the city of Zahle and the wider Bekaa region was selected as the project’s target location due to recurrent droughts, extreme heat and a shift in rainfall patterns have recently become major concerns for these areas. Over the past ten years, the region has witnessed a significant influx of displaced persons. This has placed additional pressure on pre-existing water scarcity and an under-developed water and wastewater infrastructure.

The launch of this project comes after an inception workshop, with the participation of the ministers of environment from Jordan and Lebanon, and who will chair respective national project steering committees, and other key stakeholders, in order to outline and endorse the project’s work-plan and implementation process.

“We need to take bolder steps to confront the challenge of climate change and focus on the importance of resilience and adaptation - what the Secretary-General called the forgotten half of the climate change equation without which we have no hope of achieving our common climate goals,” said Dr. Mounir Thabet, Deputy Executive Secretary, UN ESCWA

“In Lebanon, UN-Habitat has a strong relationship with local authorities and communities in the Bekaa region thanks to previously implemented projects including the UN-Habitat and UNICEF’s Neighbourhood Profiling initiative. The findings of the profiles have been instrumental in outlining pre-existing water sustainability challenges and needs in neighbourhoods throughout the region,” said Taina Christiansen, Head of UN-Habitat Lebanon Country Programme.

The overall aim of this project is to better respond to climate change impacts and vulnerabilities in the context of the Syrian crisis in Jordan and Lebanon. This will be done by demonstrating what concrete adaptation measures respond to the needs of both displaced persons and host communities – especially women and youth – while mitigating any tensions over natural resources and employment opportunities.