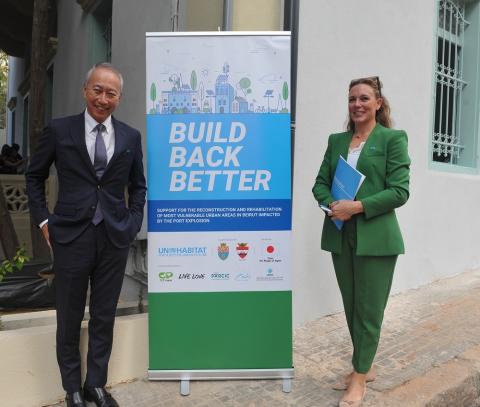 The Government of Japan and the United Nations Human Settlements programme (UN-Habitat) marked today the completion of the rehabilitation of residential buildings of heritage value in the Rmeil Cluster, which were heavily affected by the Beirut port explosion.

This project entitled “Support for the reconstruction and rehabilitation of most vulnerable urban areas in Beirut impacted by the Port explosion” was implemented by UN-Habitat and funded by the Government of Japan for a total of US$2.16 million. Adopting the ‘’Build Back Better’’ approach, UN-Habitat Lebanon in partnership with Live Love Lebanon, completed the rehabilitation works in the Rmeil cluster. Nine buildings seriously damaged during the explosion of were fully rehabilitated and 2 buildings were propped. The public facilities within the cluster were also restored allowing for more green spaces and landscaping within the city.

“This Japan funded project implemented in Beirut city, will be one that I will always remember. It has an integrated and comprehensive approach, and the implementation was very well executed. The impact of this project is remarkable on different aspects. We hope all heritage buildings in Beirut can be rehabilitated to bring back to life the essence of the city.” said Marwan Abboud, Governor of Beirut.

“As today we mark the finalization of the works within the Rmeil cluster, we cannot but hope to see the city of Beirut fully restored from the devastating port explosion. We thank all the donors for their generous contributions and their support to bring back the city of Beirut to what it used to be, and we hope we can make a better city in the years to come,” said Jamal Itani, Mayor of Beirut.

“Every reconstruction initiative is a step closer to recovery, and this project funded by Japan is the best proof. Having experienced two of the largest explosions in modern history, the Japanese government was among the first responders to help Lebanon in the aftermath of the explosion across several vital sectors. Today, Japan remains committed to allocating resources to support projects that push towards Lebanon’s comprehensive development and contribute to alleviating the burden of hardships on the most disadvantaged communities across the country.’’ said H.E. Takeshi Okubo, Ambassador of Japan to Lebanon.

‘’More than two years have passed since the devastating Beirut Port explosion. This beautiful cluster was destroyed in seconds. Thanks to generous funding from the Government of Japan and with the efforts of our implementing partners, we are standing today in what we call a “Build Back Better” cluster, exemplifying good urban recovery’’ said Taina Christiansen, Head of the UN-Habitat Lebanon Country Programme. ‘’The road to urban recovery is a long one, yet we as UN-Habitat are fully committed to making Beirut city, a better city for all’’ she concluded.

Through a multi-sectoral approach, the project encompassed multiple interventions, including:
    Rehabilitation of 11 buildings of heritage value (9 were fully rehabilitated and 2 of them were propped) and key public facilities in Rmeil Cluster in partnership with Live Love Lebanon.
    Regeneration of 3 alleyways in Maraach Bourj Hammoud.
    Improved livelihood through cash-for-work activities with the support of the Committee for the Children of Palestine, Japan (CCP).
    Support for municipal services, provided to the Beirut Fire Brigade Centre in Karantina.
    Upgrading of Laziza and William Hawi Parks with the support of Rashet Kheir.
    COVID-19 awareness-raising and installation of handwashing stations with the support of PARC Interpeoples' Cooperation (PARCIC).