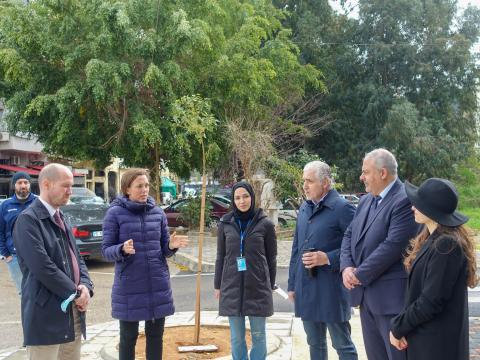 Today, UN-Habitat and CatalyticAction inaugurated a number of innovatively rehabilitated sidewalks in the neighbourhood of Karantina, close to the Beirut Governmental Hospital, the National HIV and TB Centre and Karantina Public Park. The project was implemented in close collaboration with the Municipality of Beirut.

This initiative, funded by the Swedish International Development Cooperation Agency (Sida) and Fondation de France, focused on making Karantina’s streets more pedestrian and family friendly by slowing traffic, improving existing sidewalks, and making the area greener. This was done by creating pedestrian crossings, building access ramps, a new roundabout, speed bumps, road markings and planting trees. A new sidewalk was implemented that features a long concrete bench for people to gather where cars once parked. The design interventions for this project were guided by a participatory approach ensuring input from the local community around their needs, visions, and aspirations for the space.

“Beirut was previously known for its public spaces, but with rapid unplanned urbanization, these spaces have decreased. We must all work to create new public spaces and revive existing ones, as they are the beating heart of the city and provide people a space to relax and interact with their neighbours. These interventions are crucial. We should all join efforts to improve the quality and increase the number of public spaces in the city, and support the local community to protect them,” said, Judge Marwan Abboud, Governor of Beirut.

“Applying Build Back Better approaches in Beirut following the tragic 4 August 2020 explosions, is one of Sweden’s priorities. I am happy to see this intervention that has indeed improved accessibility to two key health facilities in Karantina, one of which UN-Habitat rehabilitated with our support. This is a good example of how sidewalks and streets should be designed across Beirut,” said Christoffer Burnett-Cargill, Counsellor, Head of Development Cooperation, Embassy of Sweden in Beirut.

This initiative is part of UN-Habitat’s wider Sida-funded project that supported the only National HIV and Tuberculosis (TB) Centre in Lebanon restart its operations after it was severely damaged by the Beirut Port explosion. UN-Habitat rehabilitated the Centre inside and out ensuring it regains structural stability, is easily accessible to the public and uses renewable energy so it does not rely on the national power grid.

“It is important that the overall mobility of a city takes into consideration the needs of all users – not only motorized transport. I am delighted to see this small, yet impactful intervention which has the potential of reviving small pockets of urban public spaces in Karantina. This initiative complements UN-Habitat’s rehabilitation of the National HIV and TB Centre and makes the Centre safely accessible for pedestrians. UN-Habitat works across the country to improve the quality and increase the number of inclusive and accessible public spaces as places for dialogue and recreation,” said, Taina Christiansen, Head of UN-Habitat Lebanon Country Programme.

Joana Dabaj, Co-founder and Principal coordinator of CatalyticAction added “co-designing public spaces that are child friendly and inclusive is an important approach for a vital city, that is not only suitable for children to grow up in but for everyone to live in. At CatalyticAction, we believe that children and their families have the right to participate in shaping their built environment and develop a sense of belonging to it especially amidst the multiple crises that Lebanon is going through”.