Under the patronage of Dr. Hussein Abdel-Rahman Al Rand, Assistant Undersecretary of the Health Centers and Clinics Sector, the UAE Ministry of Health and Prevention organized a workshop on high blood pressure titled ‘Hypertension: From Guideline to Practice.’ Aside from Dr. Al Rand, Dr. Buthaina Abdullah bin Belaila, head of the Non-Communicable Diseases Division; a visiting consultant from the UK Dr. Mehdi Mabrouk Jibany, Consultant in Family and Kidney Diseases; Prof. Hassan Al-Tamimi, a Consultant Cardiologist from the Mohammed Bin Rashid University of Medicine and Health Sciences; and a number of doctors and nurses from primary healthcare centers were also present.

The session included a presentation on the causes of high blood pressure and treatment methods in accordance with international guidelines and the hypertension guide launched by the Ministry in early 2016. It also reviewed the major risk factors of coronary vascular diseases (CVD) and how to prevent them. Several case studies of various types of high blood pressure were presented and discussed by experts.

Dr. Al Rand said: “Our goal is to work out ways to prevent the onset of hypertension as well as guide members of the community in diagnosing the disease and the associated risk factors through early screening. This chronic disease is a serious health burden and poses an economic threat to society because of its association with other diseases such as CVD, stroke, kidney failure, disability, and premature death, which is why hypertension is also called the ‘silent killer.’” 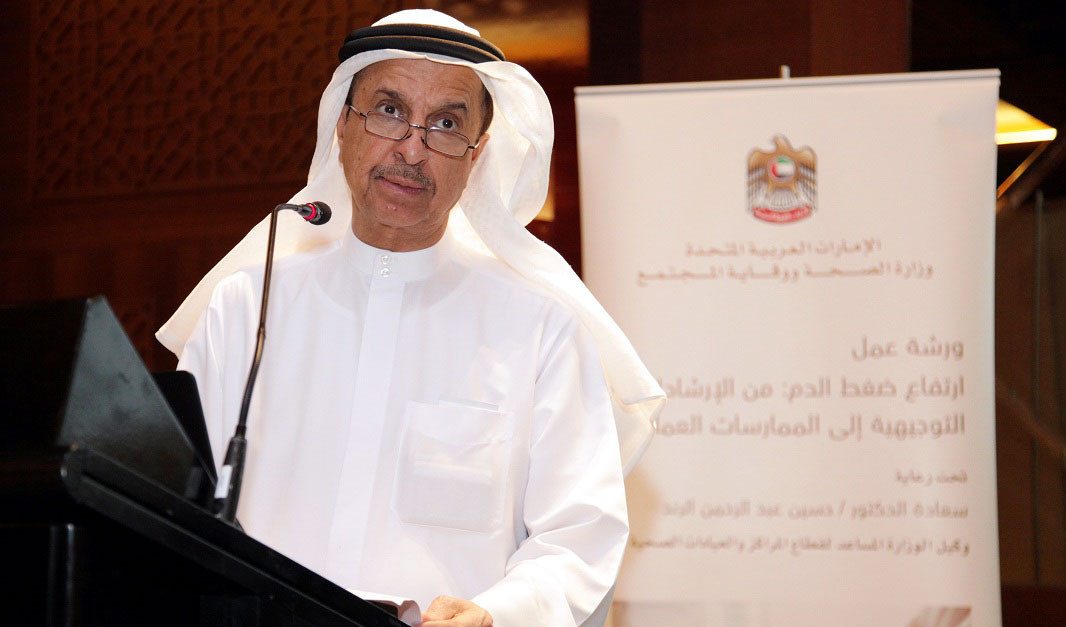 The Assistant Undersecretary emphasized that the workshop falls in line with the Ministry’s National Strategy to Combat Non-Communicable Diseases (2017 - 2021). He stated that the strategy falls within the framework of promoting healthy lifestyles among the people of the UAE to reduce the risk of associated diseases by implementing a healthcare system based on the highest international standards, complementing UAE Vision 2021.

Explaining further, Dr. Al Rand said that the Ministry has developed a special protocol to monitor blood pressure disease per its objective set out in cooperation with its partners in the UAE. He said that the Ministry has been evaluating the healthcare facilities in all private primary healthcare centers to better deal with high blood pressure levels and associated diseases.

Dr. Al Rand pointed to the launch of a smartphone application called ‘e Itminan’ by the Ministry for the prevention of non-communicable diseases, including high blood pressure and CVD. This, he said, is a quality addition to domestic healthcare services which will help provide better health medical aid to the citizens and residents of the UAE in accordance with the best international practices.

Dr. Buthaina bin Belaila talked about the launch of the hypertension guide at the beginning of 2016 and several workshops that were conducted in primary healthcare centers to introduce the guideline and the process applied. She said that today’s workshop is a follow-up of that launch and assesses the role of medical staff in the diagnosis of high blood pressure as well as the use of updated methods for treating and guiding patients and members of the community for improved prevention. She further said that the Ministry will launch clinics dedicated to non-communicable diseases to screen high blood pressure patients.

Dr. Bin Belaila further explained that hypertension is the main cause of at least 45 per cent of global deaths due to CVD and 51 per cent from stroke. Locally, deaths due to cardiovascular  disease comprise 30 per cent of the mortality rate for non-communicable diseases, 5 per cent of which are attributed to high blood pressure, according to 2015 statistics.