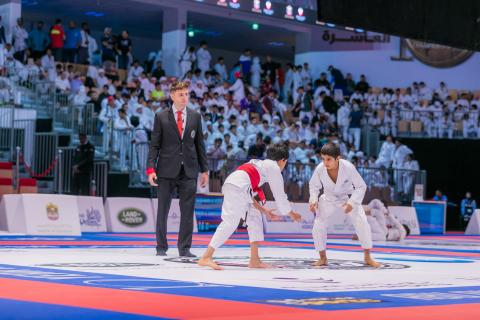 Jiu-jitsu heroes from all four corners of the globe are in the final throes of preparation for the Abu Dhabi World Professional Jiu-Jitsu Championship 2019, the 11th edition of the most important event on the jiu-jitsu global calendar, which runs from 20-26 April under the patronage of HH Sheikh Mohamed bin Zayed Al Nahyan, Crown Prince of Abu Dhabi and Deputy Supreme Commander of the UAE Armed Forces.

Amongst those getting ready to descend on Abu Dhabi, the home of jiu-jitsu, for seven days of top-class action are a jiu-jitsu family from Saudi Arabia who are only starting out on their journey in the sport but hope to make their dreams come true when they enter Mubadala Arena.

Led by their father, Mamdouh Al-Radadi, widely regarded as the ‘don’ of jiu-jitsu in the Kingdom, the Al-Radadi brothers will be proudly flying the flag for the sport in their country and raising awareness of jiu-jitsu while hopefully making their mark on the sport’s most prestigious championship.

The Al-Radadi brothers: Sultan, Abdel Aziz, Ahmed, Naif and Emad, who range in age from 3 to 15 years old, will be competing in the Abu Dhabi World Jiu-Jitsu Festival through to the Youth Championship on the mats in Abu Dhabi, having been introduced to the sport by their father who picked up jiu-jitsu at a private club in Jeddah.

Impressed with the high skill level, discipline, mental agility and competitiveness required in the sport, Al-Radadi senior decided to expose his children to it and the rest is history. Having captured gold on the mats in various competitions between them, the siblings are heading to ADWPJJC 2019 eager to show jiu-jitsu has a bright future.

"Jiu-Jitsu will change the course of children's lives and will enable them to cope with the challenges they will face in their future. As life is full of challenges, jiu-jitsu helps kids gain self-confidence, discipline, respect, tolerance and hard work, " Mamdouh Al-Radadi said.

"I encourage parents to enrol their children in a jiu-jitsu class to recognise the beauty of this sport. Coaches also have a responsibility in boosting the awareness of jiu-jitsu among children and encourage them to practice it. “

Commenting on the status of jiu-jitsu in Saudi Arabia, Al-Radadi added: “The sport has a great future in Saudi Arabia and has the potential to replace football in Saudi schools’ sport curriculum.”

The Saudi siblings serve as a perfect case study to demonstrate how jiu-jitsu is gaining popularity around the world, and Abu Dhabi’s role in taking the sport beyond borders and engaging new audiences.

The Al-Radadis will be joined by athletes from other emerging countries in jiu-jitsu, including Jordan, Russia, Kazakhstan, Angola and more.

Mohammed Hussein Al Marzooqi, Director of Marketing and Finance, UAEJJF, said: “The participation of the five siblings among other Saudi athletes at the ADWPJJC 2019 is a clear indication of the growth of the sport in this region and around the world, while highlighting the importance of this championship.

“It is extremely encouraging to see such interest in the sport, which will have a positive impact on society in countries and help create the next generation of jiu-jitsu heroes. We look forward to welcoming all of the athletes.”

The ADWPJCC 2019 has reached full capacity for participants and registration is now closed.

For more information on the championship, visit www.uaejjf.com