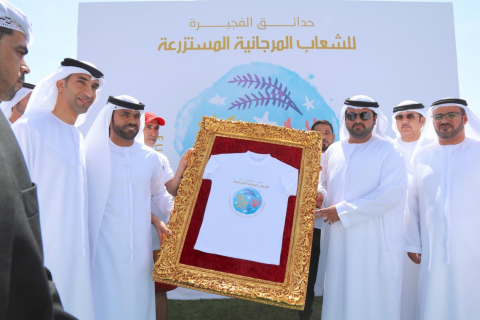 The Ministry of Climate Change and Environment (MOCCAE) today launched the Fujairah Cultured Coral Reef Gardens, the largest project of its kind in the UAE, in collaboration with Fujairah Municipality, Dibba Fujairah Municipality and the Fujairah Adventures. In line with the Ministry’s strategy to protect the UAE’s biodiversity and ensure its sustainability, the project is set to include the cultivation of 1.5 million coral reef colonies over the next five years.

At the launch event on Saturday, April 13, organized by MOCCAE under the patronage of His Highness Sheikh Mohammed bin Hamad bin Mohammed Al Sharqi, Crown Prince of Fujairah and Supreme Council Member, His Excellency Dr Thani bin Ahmed Al Zeyoudi, Minister of Climate Change and Environment, said: “Protecting and preserving the sustainability of the environment and of our natural resources is integral to the legacy of the founding father of the UAE, late Sheikh Zayed bin Sultan Al Nahyan, may he rest in peace.

“The preservation of the country’s biodiversity is also a prime area of focus for the UAE leadership today as outlined in the UAE Vision 2021. The Ministry of Climate Change and Environment has put in place multiple programs that aim to carry out the country’s national strategy for biodiversity in collaboration with other local environmental authorities in the country.”

He added that the Fujairah Cultured Coral Reef Gardens project that spans 300,000 square meters will include the cultivation of 1.5 million coral reef colonies and significantly boost the sustainability of the fish stocks, thereby safeguarding food diversity and food security in the country. “The protection of fish within the coral reefs will allow it to breed and grow. The Ministry is keen on promoting the project as an ecotourism destination.  It is also anticipated to encourage the spirit of volunteerism and community work as the cultivation of the coral reefs will depend heavily on the volunteering efforts of the youth.”

His Excellency Dr Al Zeyoudi also said that the Ministry has organized several specialized workshops for young volunteers to offer insights on the cultivation of coral reefs and their sustainability. All participants were awarded certificates by the Ministry.

His Excellency Eng Hassan Salem Al Yammahi, Director of Dibba Fujairah Municipality, said: “Under the leadership of His Highness Sheikh Hamad bin Mohammed Al Sharqi, Ruler of Fujairah and Member of the Supreme Council, the Fujairah government has made sustainable development and preservation of our marine environment for future generations a top priority. In this context, the Emiri Decree No. 1 of 1995 identified three select coastal areas in Fujairah as marine protected areas in order to preserve and grow fish stocks, provide a natural habitat for breeding fish, and protect coral reefs from human exploitation. This was the first project of its kind in the UAE. A protected area in Dadna was created in 2013 as part of the Al Bayt Mitwahid initiative.”

He added: “Effective conservation of the marine environment requires the collective efforts of government authorities, fishermen, beachgoers and the tourism sector as a whole. Therefore, Dibba Fujairah Municipality is keen to develop ecotourism and ensure its sustainability through working together with its partners in the public and private sectors to protect the natural wealth of the area. Initiatives in this regard include the installation of artificial caves to deflect underwater currents and provide a safe environment for marine organisms to breed.”

In addition, the launch event included a clean-up of select marine areas on the east coast of Fujairah. As part of the clean-up, volunteer divers aimed to mitigate marine environment pollutants in the waters off the emirate’s coast.

Spanning an area that equals nearly 60 international football stadiums, the gardens will be home to 1.5 million colonies of coral species, meticulously selected based on feasibility studies and research undertaken by MOCCAE, including Acropora, Symphillia, Pavona, Pocillopora and Stylophora.

The gardens will provide a safe haven for a large number of local fish species as well and boost their populations by protecting their eggs and larvae from predator fish and strong water currents that threaten their survival. As a result, it is set to drive the sustainability of fish stocks, which is among the key objectives of MOCCAE. In doing so, it will contribute to directly increasing the income of the fishermen – nearly 7,000 fishermen in 1,700 fishing boats work in the area.

In other important outcomes, the project will also support research studies in the area on the various types of corals already present, their breeding patterns, and the types that are best suited to the local environment to enable their successful cultivation.

The diving sites in the gardens will contribute to strengthening the UAE’s status as a leading ecotourism destination – a prime area of focus for MOCCAE. As part of this priority, the destination will be play an important role in the success of the Ministry’s ‘The UAE’s Natural Wonders’ initiative launched in 2018.