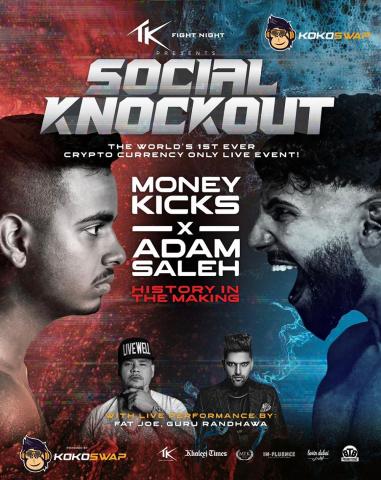 The nineteen-year-old YouTube star, better known to his millions of fans as Money Kicks, has been in training for the last few months with his coach and promoter, Tam Khan, at TK MMA & Fitness. Alongside Belhasa, international YouTube sensation Adam Saleh will also be making his Middle Eastern boxing debut.

“Preparing for this fight is the hardest thing I’ve ever had to do,” said Belhasa. “They are pushing me to my limit at TK; I’ve never had to train that hard, but it will all be worth it.”

With over three million subscribers on YouTube and almost two million followers on Instagram, there is no reason Belhasa can’t be Dubai’s answer to brothers Logan and Jake Paul. The YouTube sensations pioneered the influencer-to-fighter transition with Logan Paul going the distance against legendary boxer Floyd Mayweather Jr last June.

“Rashed is young, enthusiastic, and full of energy. His boxing is improving exponentially every day; he is talented and I’m sure he will give his fans a great show,” said Tam Khan, CEO of “Social Knockout”, which is held under the banner of TK Fight Nights, and the founder of the TK brand.

Fans can expect to see up to ten (10) exhibition fights on the night, whether in person or through live broadcasts of the fights, which will be streamed online on TK Fight’s official website. The event has already attracted the attention of many celebrities, with rappers Fat Joe and A Boogie Wit Da Hoodie confirming that they will be performing at the event as well as the Indian singer, songwriter, and composer Guru Randhawa.

In an unprecedented move, the event plans to run completely on cryptocurrency transactions.

“This is a league that is unlike any in the world. We’re starting things out with a bang, and we’re proud to be the first to use cryptocurrency only for our transactions, which is in line with the government’s directive to turn Dubai into a leading digital economy and a destination of choice for all sporting enthusiasts,” said Khan.

He added: “Dubai has always been on the forefront of adapting the latest developments in technology and hosting the biggest sports events, so it makes sense for the next evolution of both those industries to happen here.”

Organizers will use KoKoSwap tokens as transactions for all purchases related to the event, including photographs, which will be auctioned off as non-fungible tokens (NFT). “Fans will be able to take this unique experience with them through NFTs of the night, which will let them own a part of history,” Khan said.

Prior to the tournament, fans will also be given the opportunity to see their favorite fighters in a series of exciting events, such as weigh-ins, fighter Q&A’s, a public workout, and face offs. Details will be announced soon.

“Social Knockout” will likewise be coming to combat fans everywhere with a series of fights that are expected to take place across the region and the world. Details will be announced in due course.