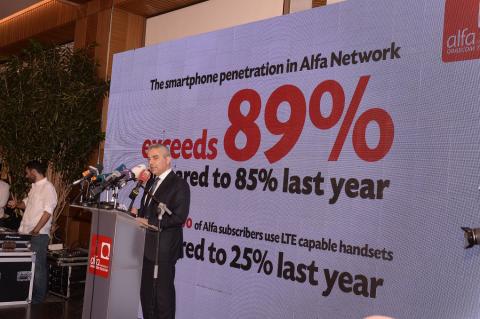 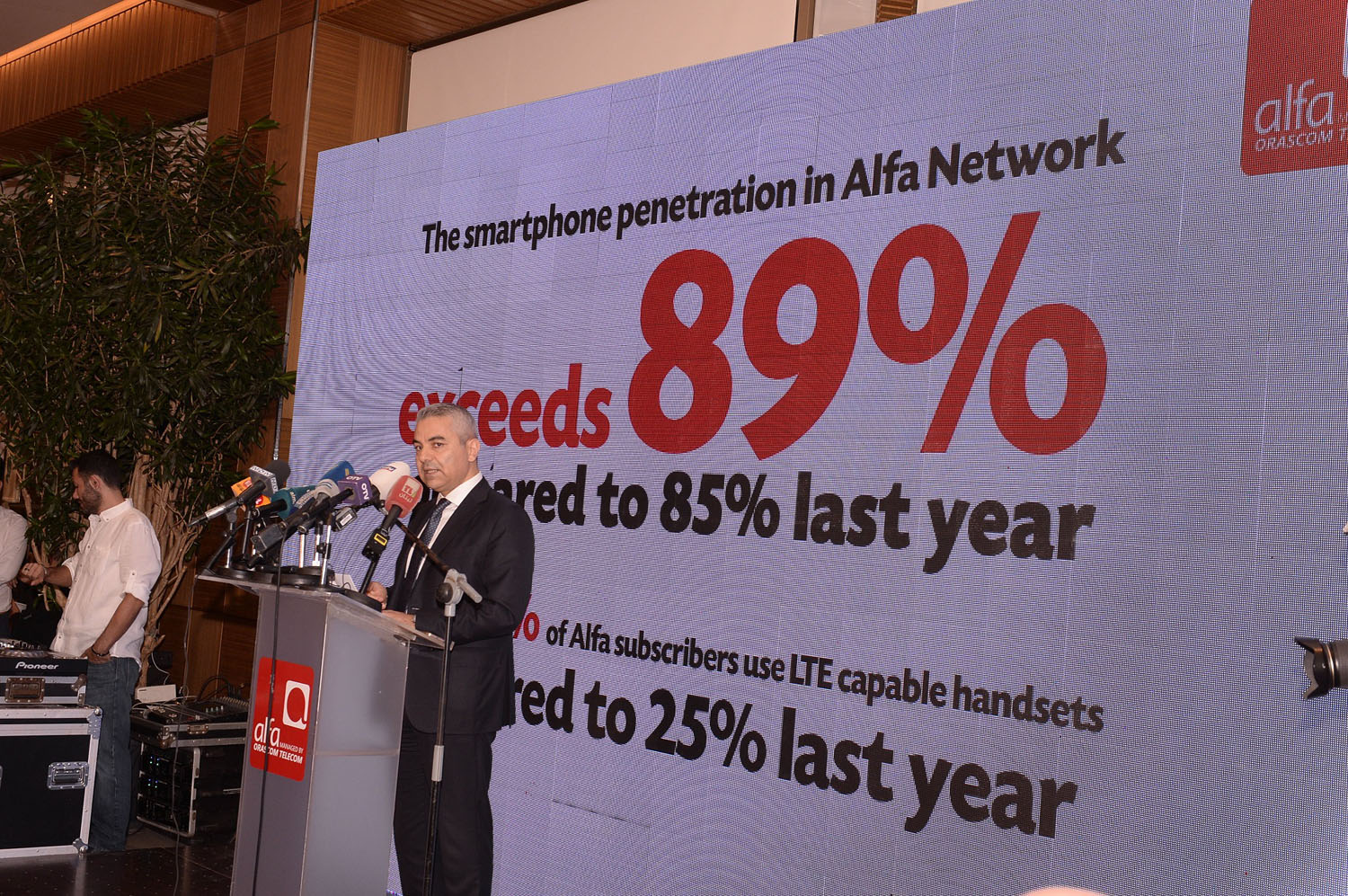 The Iftar featured a live transmission of Sufi dancing via Alfa’s 4G+ network from the city of Byblos, which combined heritage with modernity and demonstrated the tremendous potential of the Alfa 4G + network.

“Our gathering during the holy month of Ramadan is an annual event in which we thank the press and media for their positive and constructive support to us and to our projects at the service of the community and our subscribers,” Hayek said. “Your heavy attendance is a testimony to the strong bonds that tie us together”.

He added, “We will highlight our most important achievements since last year’s Iftar, the most important of which is the 4G + project, which covers 95 percent of the Lebanese population and about 72 percent of Lebanon's geographical area via 1128 sites”.

Speaking about data consumption on the Alfa network, he noted that it had doubled for prepaid subscribers from 500 megabytes to 1 gigabyte per month, and reached 2.2 gigabytes a month for postpaid subscribers, an increase of 36 percent compared to the previous year. 89% of Lebanese own a smartphone, compared with 85% last year, “confirming that the investment we are making in regard to 4G + bears fruit. About 36% of our subscribers now have 4G compatible devices, compared to 25% in 2016”.

Hayek stated, “In one year we have introduced 16 new services to be added to the ones we already offer, the most recent being the Alfa A+ offer for university students. In October, we also lowered data rates to meet the needs and means of our subscribers. In line with this expansion, we opened the world-class Alfa Flagship Store at our new headquarters in Parallel Towers – Dekwaneh. We invite everyone to visit it and become acquainted with our broad range of services”.

“A whopping 75 percent of our subscribers, i.e. 1.5 million, are subscribed to data, and social media platform account for 50% of the data consumption”.

“On the human level, we are proud of the Alfa 4-Life CSR program, which meets the needs of our society and supports many associations that deal with children with communication difficulties through permanent activities. I would like to thank His Excellency Minister Jarrah for his participation in our recent event, a Japanese-style flower exhibition, organized in cooperation with the Father Andeweg Institute for the Deaf. We also open our doors every year for female secondary school students to learn more about the telecom sector and the opportunities available to them. We are proud that women make up 41 percent of the Alfa family. Unfortunately, since there is still a shortage of women in the tech sector, we call on young ladies and women to become actively involved in this field. At the same time, we are launching targeted technology competitions, most recently the Alfa and Ericsson Internet of Things (IoT) Competition, in which we saw a high degree of creativity among university students. We also launch awareness campaigns on traffic safety as part of our role as a responsible company, to train drivers on sound driving rules, with associations such as Kunhadi and the National Traffic Safety Council”.

Hayek added, “In 2016, the combined population of the Earth, amounting to about 7.4 billion, consumed primary resources equivalent to 1.6 times the resources that our planet can reproduce annually, such as energy, water, oil and gas. This number will double if we continue on this track, and in 2030, we will reach a stage where the resources of the Earth will no longer suffice for its population. I mention this to emphasize the fact that there is a link between the needs of the Earth and the problems we experience, and technology. The new industrial revolution, namely the digital revolution, is the only salvation for the Earth and its population. We can preserve primary resources through Artificial Intelligence, with IoT allowing us to monitor everything that happens on Earth to reduce the squandering of natural resources. Consequently, herein lies the primary role of technology in the control and preservation of our primary resources. Hence the role of 5G technology, which allows this to take place. In this context, I am pleased to announce that Alfa will be introduce the first 5G site, as we will hopefully celebrate its launch on our network at the next Iftar, and this achievement will put us on the global map in the telecommunications sector”.

Hayek pointed out that the cellular sector is a leading sector in Lebanon, which provides happiness to people. Studies have shown that buffering adversely affects people’s health and increases their heart rate. “Thus, we are not merely a cellular operator, but also a provider of happiness”.

Hayek concluded with a video presentation of the Alfa 4G+ campaign with Silvio Chiha, Youth Ambassador and Campaign Ambassador.

Minister Jarrah said that the telecommunications sector officials are making every effort to revive it. “There is a clear commitment to development and progress to bring Lebanon back to the position it deserves. While Lebanon was the first country in the region to introduce GSM technology, recent events have led to the delay of this sector”.

"For example, the 4G service network was delayed for 3.5 years to prevent Lebanon’s migration to 4G and then to 5G, which put ahead of us the challenge to compensate for the lost development and modernization. Nonetheless, there is no fear as long as there are people who believe in Lebanon, the telecommunications sector, and its development. It is also possible to move forward under the new president and government. Indeed, we have already made clear progress in the telecommunications sector in just five months.

After commending the media, Jarrah said that a successful media person is the one that looks for the truth, because the role of the media is to convey the truth to the people, shed light on facts, not accusations and adopting the point of view of corrupt people who have disrupted the country for many years. Just as the task of the media is to highlight mistakes, it is also entrusted with highlighting and telling the truth, and we should accept it, especially when it is unbiased.

"I came to the public sector from the private sector, and I believe in the role of this sector in the development of Lebanon and the telecommunications sector in particular. But unfortunately, even the private sector, which asked the ministry to be a partner in the telecommunications sector, attacked us when we gave a license to a company from this sector”.

Jarrah pointed out that the Ministry of Telecommunications has three arms: the two mobile network operators and Ogero, “and we hope to attain a level of competition between the two companies and Ogero. We also hope that the three arms will stay in permanent competition, because this offers the best for the country, and the Lebanese deserve to have the best services and rates. Hence the idea of Prime Minister Saad Hariri to offer a new package to the students of Lebanon, its promising future, in order to benefit from rates commensurate with their means. I hope that we will be able to offer similar packages to other sectors”. He also pointed out that the telecommunications sector needs significant investments for its development.