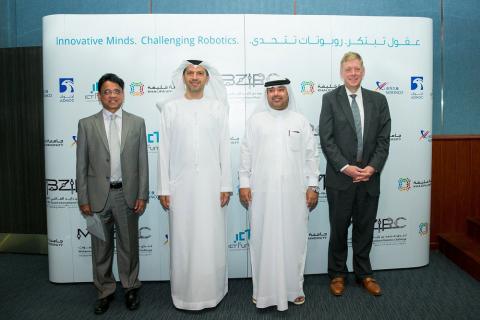 A press conference held to discuss the upcoming Mohamed Bin Zayed International Robotics Challenge (MBZIRC) on Sunday, March 12, 2017 at Khalifa University in Abu Dhabi focused on the rare opportunity the event will present for the public to witness the world’s best robotics solutions in action. Taking place from March 16 to 18, 2017 at the Yas Island Marina Circuit in the Capital City of Abu Dhabi, UAE, the inaugural MBZIRC is being organized by Khalifa University under the patronage of H.H. Mohamed bin Zayed Al Nahyan, Crown Prince of Abu Dhabi and Deputy Supreme Commander of the UAE Armed Forces.

Academic luminaries took to the podium to explain the relevance of MBZIRC and share the details of the competition. The panel consisted of Dr. Tod Laursen, President of Khalifa University, Dr. Arif Sultan Al Hammadi, Executive Vice President of Khalifa University, HE. Dr. Mohammed Al-Mualla, Undersecretary of the Ministry of Education for Academic Affairs of Higher Education and General Chair of the event’s Organizing Committee and Dr. Lakmal Seneviratne, Associate Provost of Research and Graduate Studies and Director of Robotics at Khalifa University. The speakers highlighted the events program and the impact MBZIRC will have on the future of robotics development and the sustained growth of the robotics industry. 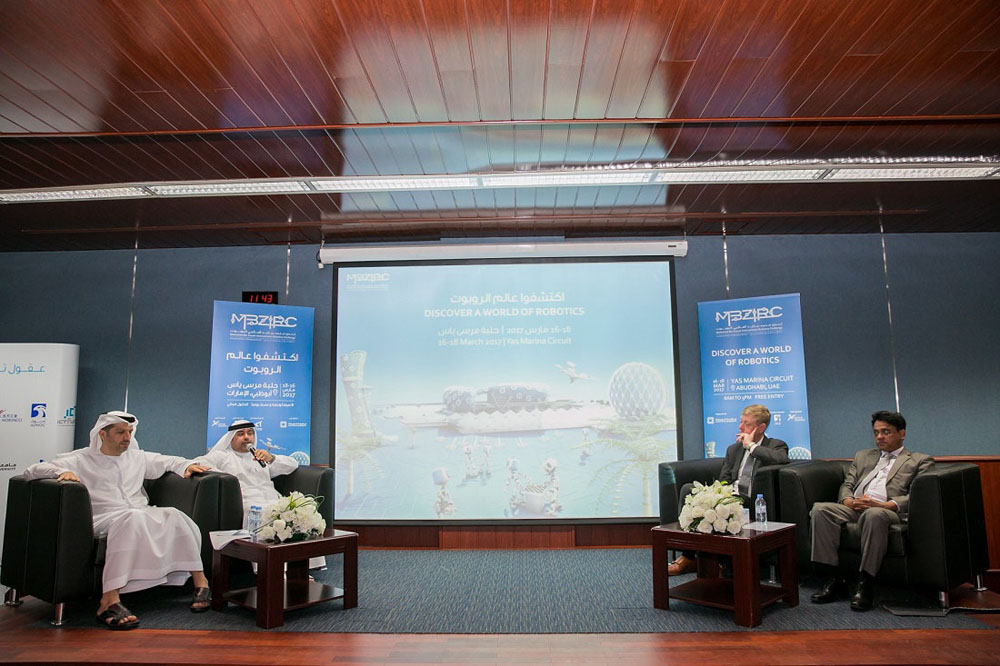 “I would like to point out how fortunate we are to live in a country that prioritizes innovation and the growth of a technology-empowered society,” said Dr. Laursen. “Through the limitless support of the UAE’s wise leaders, we are conducting, supporting and planning cutting-edge robotics research and development that would not be possible anywhere else in the world.

Although robotics has already proven its potential to spur social and economic development worldwide, here in the Middle East there are still some technological gaps that need to be filled. Initiatives such as MBZIRC are crucial to the sustained and comprehensive growth of the robotics field and its broader applications in the Arab World.”

Dr. Al Hammadi, on the other hand, outlined the various benefits of the Challenge in supporting research and higher education and enhancing the UAE’s global leadership in the technological field. He said “Although the Mohamed Bin Zayed International Robotics Challenge will honor and reward the best robotics designs, technologies and implementations, the greatest prize that awaits us is the valuable knowledge we shall acquire on how the future of robotics is dramatically unfolding and the important applications that will make robots important enablers of society. This competition will also significantly drive research and studies on robotics and foster greater collaboration and camaraderie among its practitioners. Moreover, it will highlight the emergence of the UAE as a global hub for advanced technology in line with its Innovation Strategy which seeks to establish the Emirates as one of the world’s most innovative countries in the next few years.” 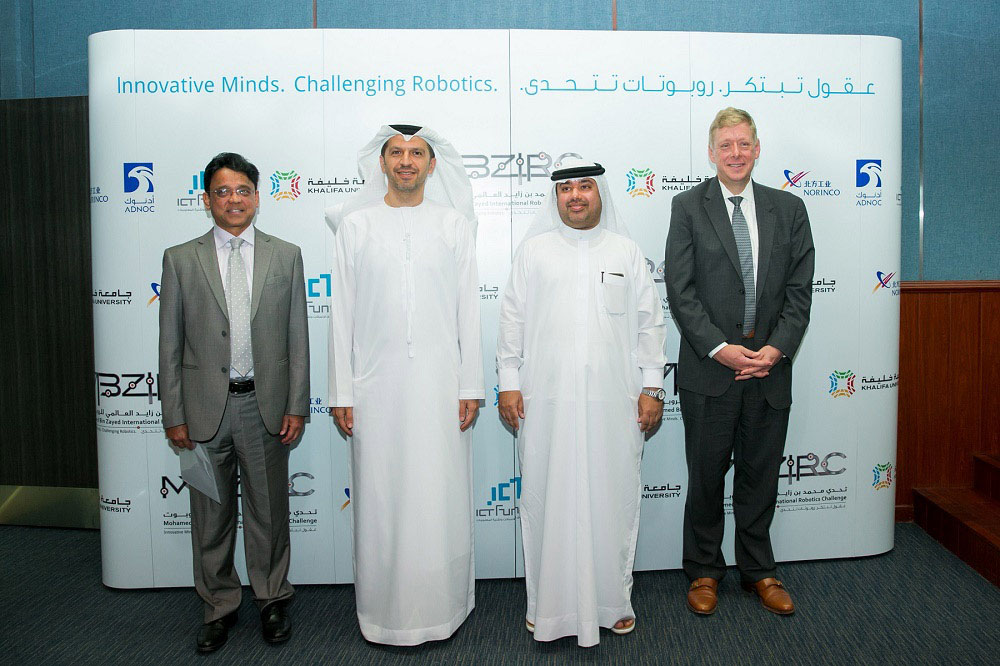 The challenge is being supervised by two committees: a Steering Committee chaired by H.E. Hussain Ibrahim Al Hammadi, UAE Minister of Education, with Dr. Arif Al Hammadi as Vice Chair and Dr. Al Mualla as member; and an Organizing Committee chaired by Dr. Mualla, with Dr. Lakmal as President of the Technical Committee, and Sayed Al Hashmi, Head of Marketing and Communication, and Areej Al Haddad, Events Manager at Khalifa University.

The Mohamed Bin Zayed International Robotics Challenge is a biennial competition that will gather the world’s brightest talents in the field of robotics in the capital of the UAE. The debut edition will witness 26 teams from 15 countries compete in three challenges, plus a triathlon-type Grand Challenge, all of which will involve the construction and navigation of unmanned vehicles. The total prize, and team sponsorship, worth USD 5 million is one of the biggest rewards for robotics contests worldwide. MBZIRC 2017 is supported by the Information and Communication Technology Fund (ICTF), Abu Dhabi National Oil Company (ADNOC), and Norinco. For more details, log on to www.mbzirc.com.