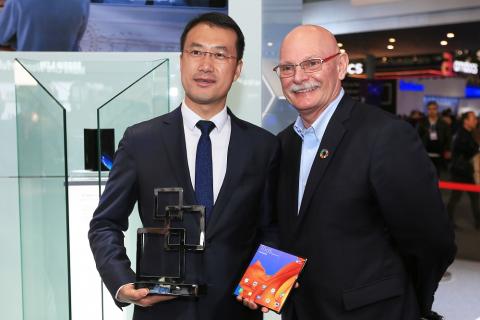 This special and most coveted award is given by the organizer GSMA for newly released or soon-to-be-listed mobile products, representing the highest recognition in pioneering future technologies. Earlier this week at MWC19 Barcelona, Huawei won a number of GSMA GLOMO Awards, including “Best Smartphone of the year” for the class-leading HUAWEI Mate 20 Pro.

“Our congratulations to all of the winners and nominees of the GSMA’s GLOMO Awards 2019,” said John Hoffman, CEO, GSMA Ltd. “The GLOMO’s are a testament to the incredible innovation and ingenuity shaping our industry and it is truly an outstanding achievement to have been selected by our esteemed judging panels. We thank all of our entrants, judges, sponsors and partners for supporting the 2019 GLOMO’s.”

"It has been one of the most exciting and keenly contested years in for Best New Connected Mobile Device at MWC 2019 as can be seen in the shortlist. In a group of standout devices, the judges felt that Huawei Mate X showed more innovation and helped move the smartphone category into a new era. The combination of a folding screen and the inclusion of 5G impressed the judges in a very closely fought award", said the GSMA judges.

"On behalf of our entire team at Huawei, I would like to thank the GSMA, including Mr. John Hoffman, its CEO and Director, and his team for this award. We are very excited and honored. This year, 5G is on – including the devices, the networks, the chipsets – all coming together online. 2019 is the year in which we transform the way we connect, bringing new and incredible possibilities to all our lives. Thank you again," said Kevin Ho, President of Handset Business, Huawei Consumer Business Group.

HUAWEI Mate X was widely recognized by the world's top media as soon as it was launched. Up to now, it has won awards from as many as 30 international global media from different countries and regions. Trusted Reviews, British technology site, and Digital Trends, US technology and consumer electronic media, praised it as the best smartphone at MWC 2019. Thomas Husson, an analyst from Forrester, told Financial Times that the advent of HUAWEI Mate X proved that Huawei is the leader of technological innovation today.

Driven by a “consumer-first” ethos, Huawei is committed to enabling all people to enjoy the benefits of the digital lifestyle. At the advent of 5G technology, Huawei is one of the few manufacturers that has the capability to develop the full breadth of 5G products and deliver a fully synergized user experience. At MWC Barcelona 2019, Huawei unveiled HUAWEI Mate X, the company’s first 5G foldable phone; the HUAWEI MateBook X Pro, HUAWEI MateBook 14 and HUAWEI MateBook 13; as well as HUAWEI 5G CPE Pro.

The GSMA represents the interests of mobile operators worldwide, uniting more than 750 operators and nearly 400 companies in the broader mobile ecosystem, including handset and device makers, software companies, equipment providers and internet companies, as well as organisations in adjacent industry sectors. The GSMA also produces the industry-leading MWC events held annually in Barcelona, Los Angeles and Shanghai, as well as the Mobile 360 Series of regional conferences.