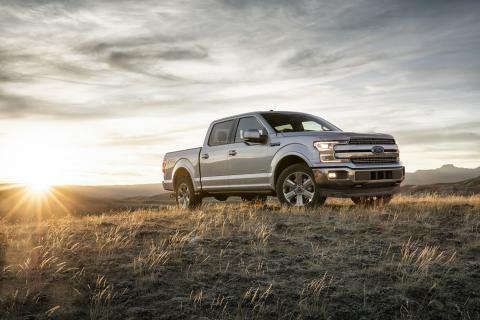 Ford’s expansion to an auto and mobility company gains momentum today, as the company unveils the new F-150 pickup, announces the return of the Ranger pickup in North America and Bronco globally, and presents its vision for the “City of Tomorrow.”

Ford’s news at the North American International Auto Show – including expansion of its Chariot ride-sharing service to eight cities – underscores the company’s drive to strengthen its core automotive business while aggressively expanding in growing mobility services. 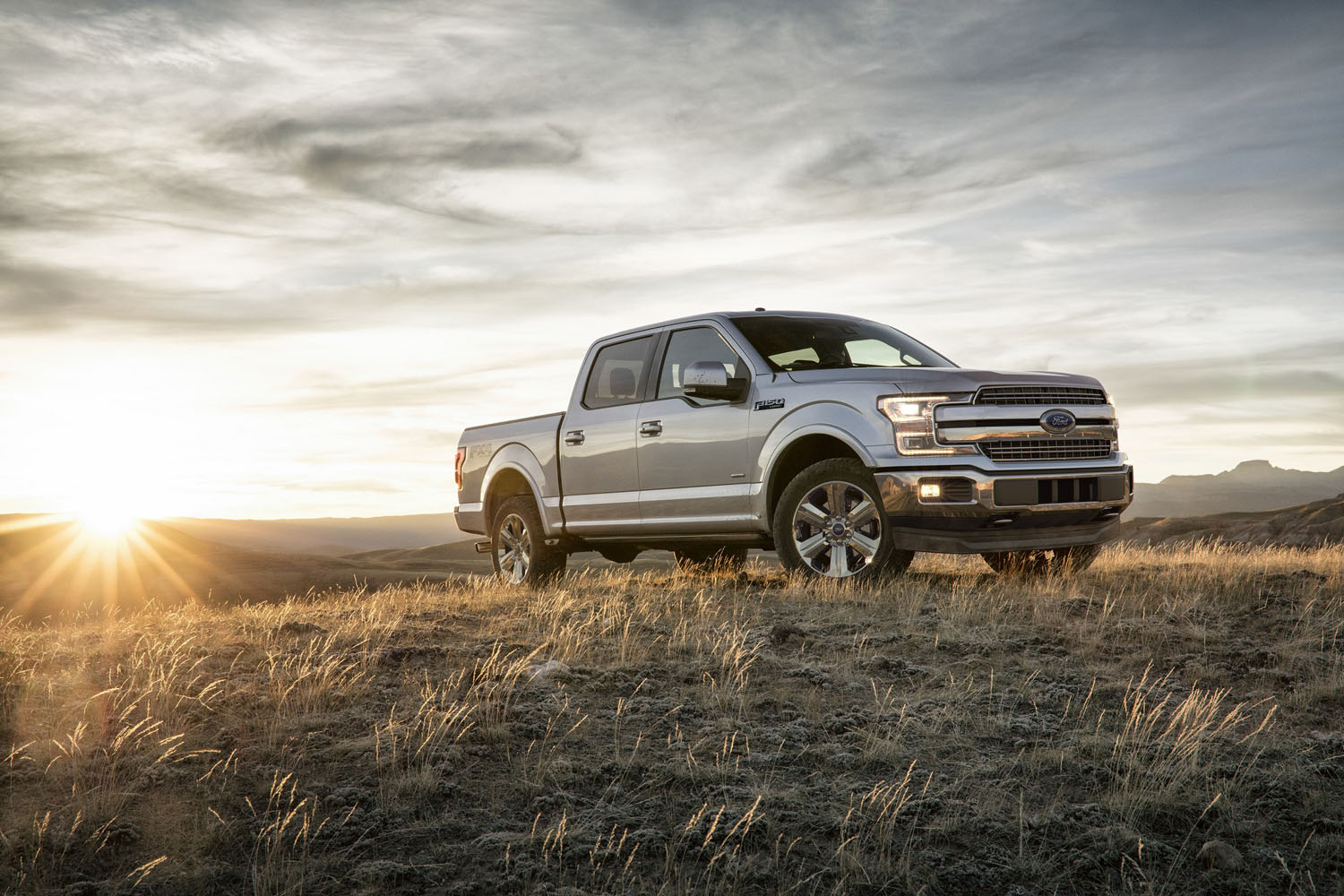 “This year, the expansion of our business as an auto and mobility company moves into even higher gear,” said Mark Fields, president and CEO. “We’re introducing even more new vehicles and technologies to make life better for millions of people in the near term, plus we’re presenting a vision and partnering with cities to move more people even more efficiently in the future.”

including a hybrid version of the F-150 and Mustang, two pursuit-rated hybrid police

vehicles, a Transit Custom plug-in hybrid, a fully electric small SUV with an estimated range of at least 480 kilometres and a high-volume, fully autonomous SAE level 4-capable vehicle – with no steering wheel, accelerator or brake pedal – in commercial operation in 2021 in a ride-hailing or ride-sharing service.

congestion issues and help people move more easily, today and in the future.

Ford is bringing back the Ranger midsize pickup truck to its North American vehicle lineup in 2019 and Bronco midsize SUV to its global vehicle portfolio in 2020. Both vehicles will be manufactured at Ford’s Michigan Assembly Plant in Wayne, Michigan.

“We’ve heard our customers loud and clear. They want a new generation of vehicles that are incredibly capable yet fun to drive,” said Joe Hinrichs, Ford’s president of The Americas. “Ranger is for truck buyers who want an affordable, functional, rugged and maneuverable pickup that’s Built Ford Tough. Bronco will be a no-compromise midsize 4x4 utility for thrill seekers who want to venture way beyond the city.”

Beyond vehicles, Ford is working with cities around the world to help address growing mobility challenges in urban environments, including gridlock and air pollution.

Ford’s City Solutions team – the only one of its kind in the auto industry– is working with cities around the world to propose, pilot and develop mobility solutions. The team also is beginning to collaborate with Bloomberg Philanthropies and its global coalition of mayors.

“This is an issue that goes far beyond congestion. It is one that represents a massive challenge to mankind, one that affects our well-being and access to health care, clean drinking water, food, a safe place to live and even the ability to find work,” said Bill Ford, executive chairman, Ford Motor Company. “By solving the mobility challenge, we have the chance to create a better world for future generations. It’s both an exciting opportunity and a big responsibility.” 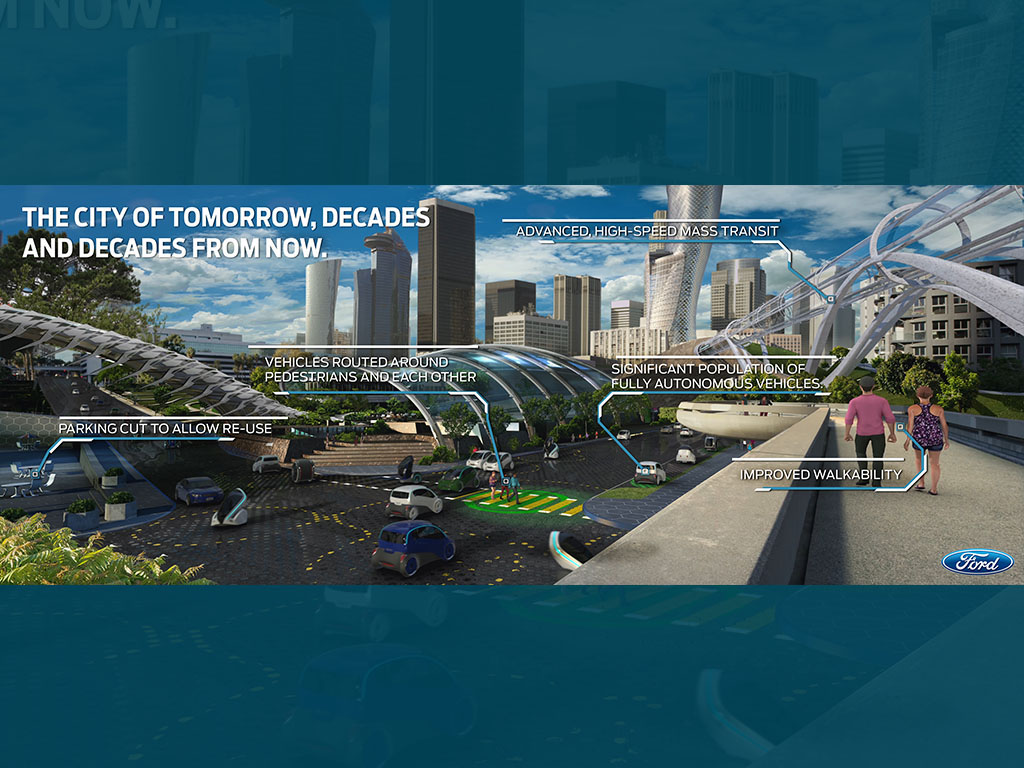 Ford today presented its vision for the “City of Tomorrow.”

Ford’s City of Tomorrow looks at how near-term mobility advancements – including autonomous and electric vehicles, ride-sharing and ride-hailing and connected vehicles – interact with urban infrastructure and create a transportation ecosystem.

For example, Ford is imagining a world in which reconfigurable roads fluidly respond to commuter needs and traffic flow. Bikes and drones provide last-kilometre solutions for both people and goods.

The Future: Near Term

At the same time, the company expects continued growth in electrified vehicles – with global EV industry offerings eventually outnumbering petrol-powered offering in the next 15 years.

Shared modes of transportation will continue to gain popularity, such as the Ford’s Chariot app-based, crowd-sourced ride-sharing service, which is expanding globally.

Chariot, which currently operates in San Francisco and Austin, Texas, is growing its operations to eight cities this year, including at least one city outside of the U.S.

In Ford’s vision of the near-term future, connected communications between vehicles and infrastructure also will grow:

Further out, Ford sees the City of Tomorrow with significant concentrations of autonomous vehicles, most of which will be electrified.

Mass transit will improve for the largest cities with new technologies like advanced high-speed public transit. Other innovations could include:

“For more than 100 years, Ford has been part of the community and the trusted source for automotive transportation,” Fields said. “Now, we want to work with communities to offer even more transportation choices and solutions for people – for decades to come.”

As part the North American International Auto Show, Ford is hosting a symposium on the City of Tomorrow at Detroit’s Joe Louis Arena. Together with partners TED, The New York Times and VICE Media, Ford has created sessions with thought leaders, mayors and prominent leaders to discuss the mobility challenges, opportunities and emerging solutions that will shape the City of Tomorrow.