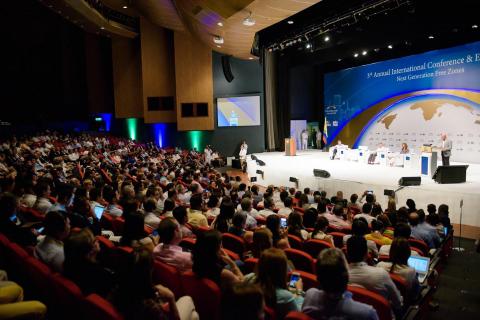 Welcomes Participation of over 850 delegates from 51 Countries

Under the theme ‘Next Generation Free Zones’,over 35world-class speakers along with global free zone practitioners, academics, policy makers, multi-lateral organizations and business representatives exchanged ideas and experiences towards developing a vision for the free zone of the future. 985 registered delegates participated in the conference, representing 54 countries. 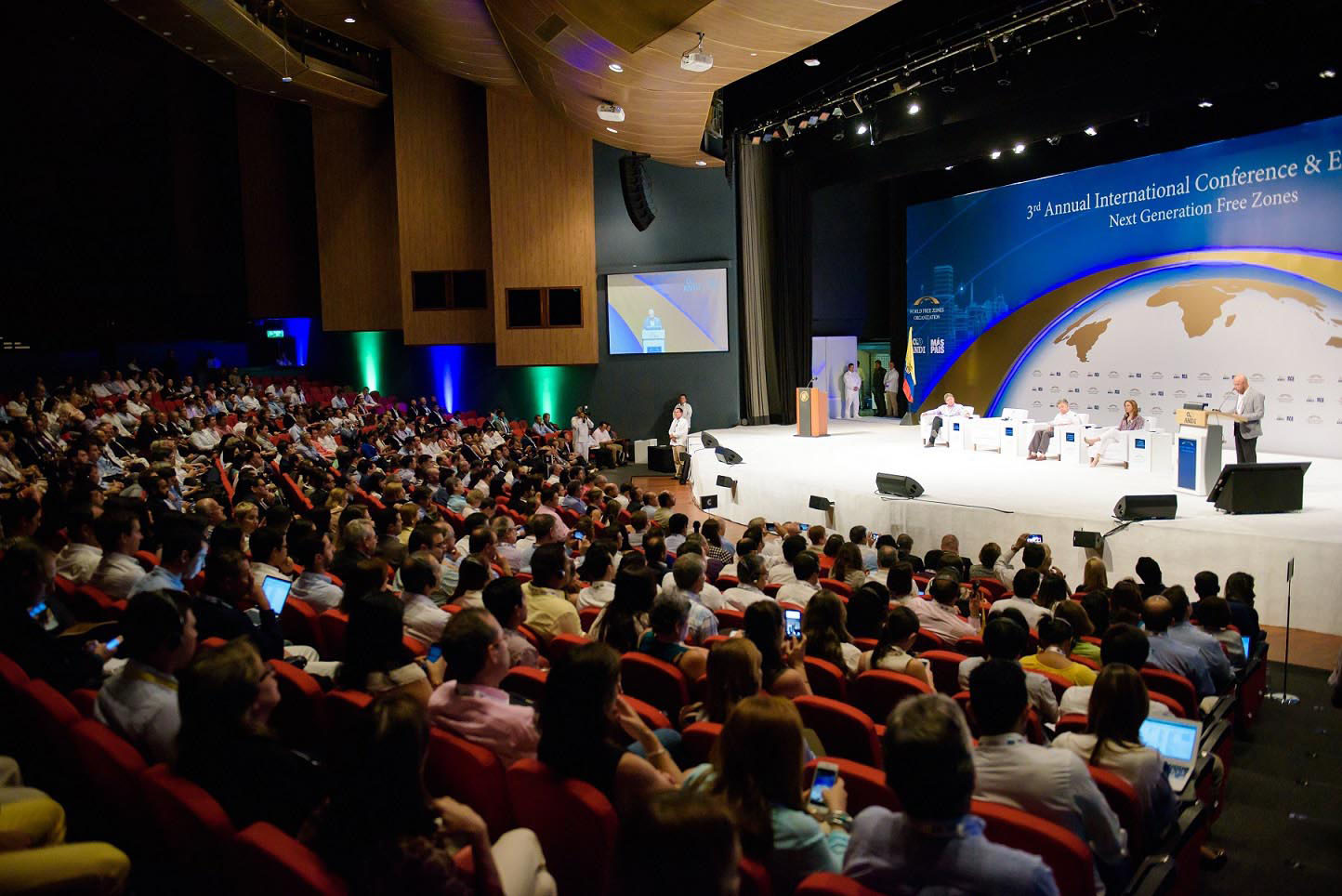 The conference and exhibition ran from 3-5 May at the Cartagena de Indias Convention Center. The 2017 edition included six panel discussions and eight workshops engaged in discussions examined ways and means to de-risk business on the one hand, and explore opportunities for expanding trade and investment on the other. Prominent topics of discussion included making zones the best place for doing business, boosting innovation, entrepreneurship capabilities and economic impact of zones, as well as why sustainability matters and the perspective of leading experts with regard to developing next generation Free Zones, among others.

In his opening remarks Dr Mohammed Alzarooni, Chairman of World FZO, informed the audience, “We in the World FZO have just concluded a study and have identified 2260 free zones in the world operating in 168 countries and territories. These are accurate numbers and I am announcing it for the first time today.” He continued, “these free zones generate 70 million direct employment, comprising nearly 30% of global trade. During a seperate research study undertaken by World FZO, domain experts who were interviewed, expressed the opinion that around 100 new Free Zones are likely to be established in Africa in the next five years. Last year, Mexico announced the development of 3 new special economic zones, with 4 in the pipeline for next year, while China received the approval to develop 7 new free trade zones.” 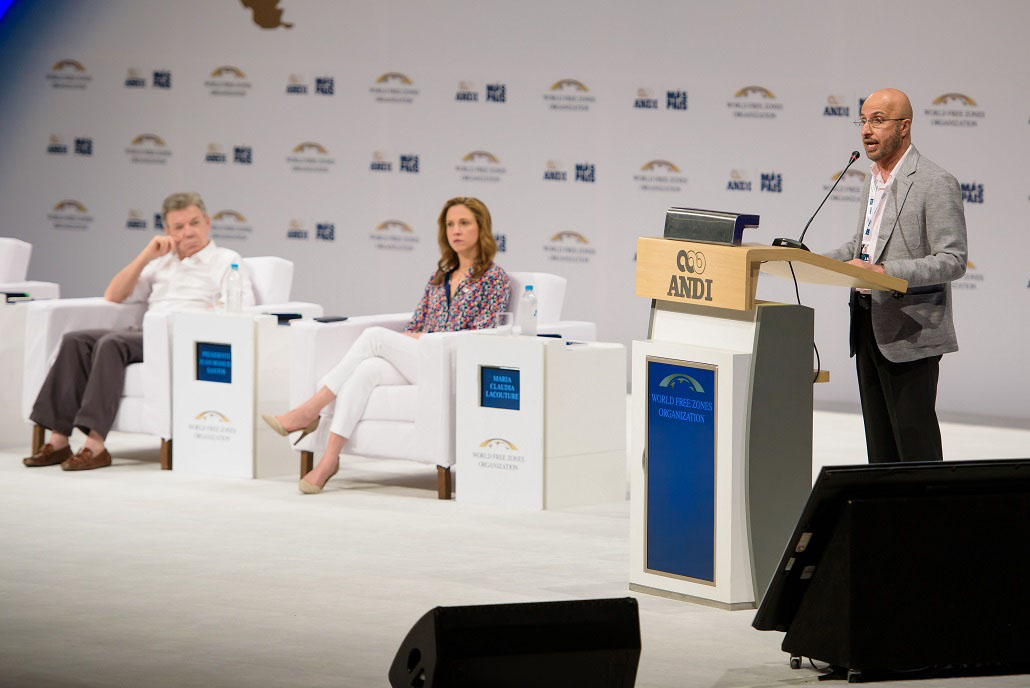 The extraordinary general assembly was called in order for members to vote on proposed modifications to the organizations Articles of Association. Members overwhelmingly voting in favor for changing the term of the Chairperson from 2 two-year terms to 2 four-year terms and to give Dubai a permanent seat on the board, among others.

Leading the general assembly meeting, Dr. Mohammed Alzarooni, Chairman of the World FZO, congratulated the members on the success of the conference and summarized its key highlights. The organization was also updated on the activities of the organization over the last year following which all the members collectively voted to approve the annual report & financial statement, the budget for 2017 and modifications to the Articles of Association.

During the general assembly meeting, Dr. Alzarooni said: “For the 2019 annual conference we received bids from five voting members and after close examination, we are proud to announce that the host city in 2019 will be Barcelona, Spain.”

As is the formal procedure of the final decision, Dr. Alzarooni handed a flag of the World FZO to Antoni Ferré, Secretary General of el Consorci Barcelona and head of the Spain delegation.

Among the key highlights of the organizations activities outlined in the meeting was the Member of Member strategy to form key partnerships for increasing membership, the Free Zone Executive Education Program, that will drive knowledge building, as well as innovation and the Free Zone Outlook Annual Report. This report will provide stakeholders an overview of the world economic environment with a focus on global economic trends of particular importance for activities in the free zones around the globe.

“On behalf of the World FZO, I would like to thank ANDI for their valuable support during the organization of this event and our honored speakers, delegates, and sponsors for supporting our third annual conference and exhibition,” said Dr. Alzarooni. He also confirmed that the 2018 and 2020 editions would take place in Dubai.

Along side Dr. Alzarooni, Juan Manuel Santos Calderón, President of Colombia and Bruce MacMaster, President of ANDI, opened the conference on the day prior. 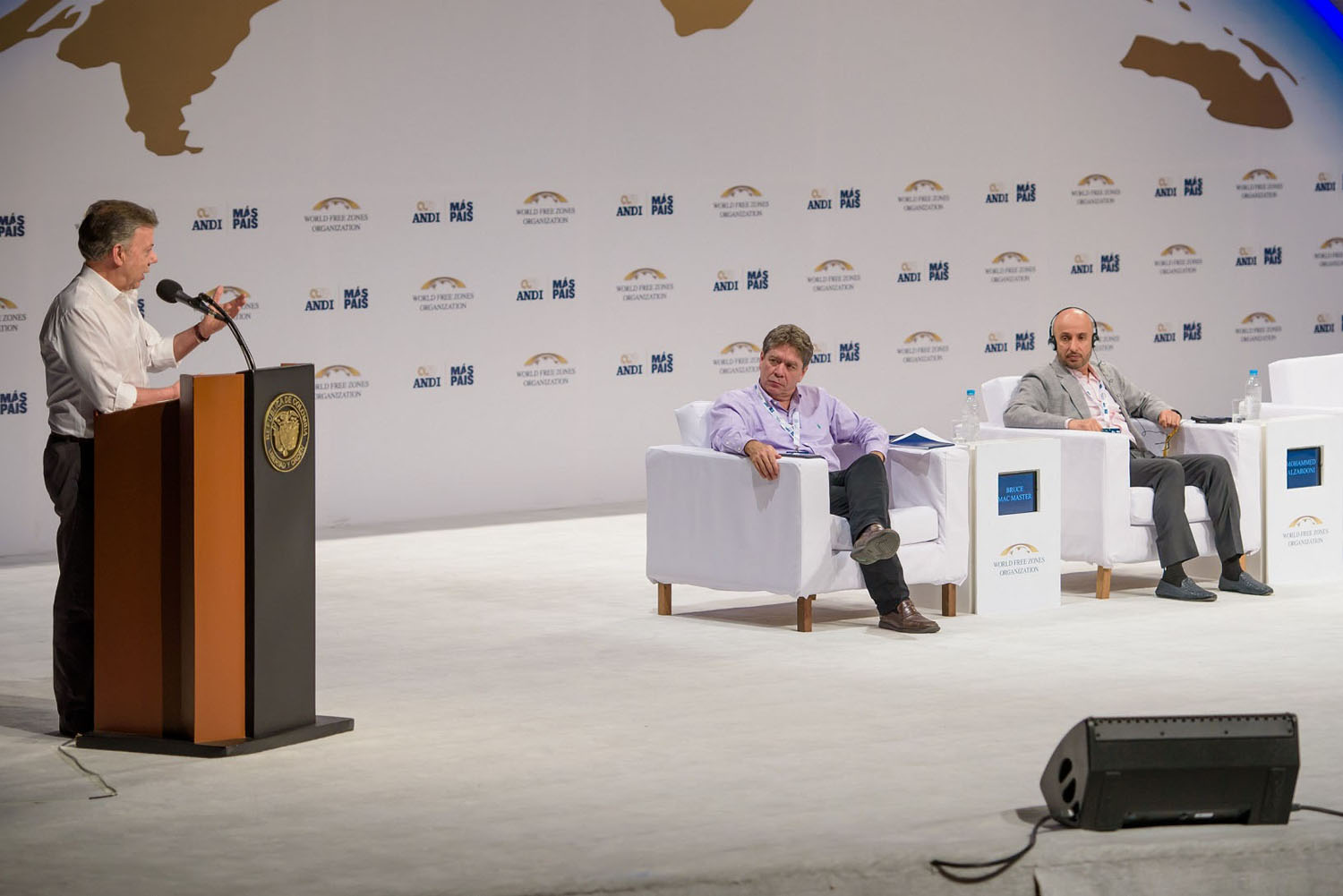 At the start of his address, President Juan Manuel Santos Calderón, thanked the UAE Ambassador to Colombia, His Excellency Mohammed Alzaabi. “Mr. Ambassador, your country was extremely generous with Colombia and Mocoa, now that we had this tragedy exactly one month ago. I appreciate it very much. Please tell the UAE authorities that all the people from Colombia are truly thankful.”

The event was organized in coordination with the host member, National Association of Industrialists of Colombia (ANDI). According to Édgar Martínez, ANDI's Director of the Chamber of Free Zone Users, "the event will allow entrepreneurs to get to know the latest developments and projects in the free zones of the world, highlighting the importance of this mechanism in the economic area ". To date, this model of development has generated in Colombia investments for more than $ 40 billion pesos over the last 10 years, Martínez explained.

In Colombia, the sector has 108 Free Zones that represent more than 25% of the 400 that currently exist in Latin America, so this meeting becomes a great opportunity for the Colombian businessmen who were there.

The World Free Zones Organization (World FZO) the not-for-profit entity representing and acting as a unified voice for over 3,500 free zones around the world, spread across more than 130 countries in every continent. We aim to transform the way free zones are understood and interact with the broader economy

Established in Geneva, Switzerland and headquartered in the Dubai in United Arab Emirates, World FZO provides global leadership in terms of knowledge of free zones, works to enhance public and general knowledge and perceptions of free zones, provides a multitude of services (such as research, events and data) for its members and the business community.

World FZO also helps increase awareness of the advantages of free zones in terms of economic and social development, foreign and direct investment.