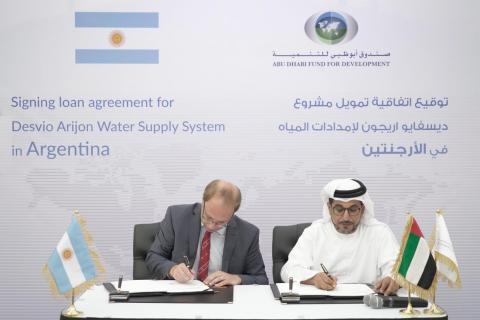 Abu Dhabi Fund for Development (ADFD), the leading national entity for international development aid, today approved US$80 million (AED294 million) in funding to contribute to the economic development of Argentina through supporting a project to fortify the water sector in the province of Santa Fe.

ADFD’s concessionary loan will facilitate the expansion of an existing water treatment plant in Desvío Arijón over two phases. Upon completion, the project will provide clean drinking water to more than 300,000 beneficiaries in 19 residential areas.

His Excellency Mohammed Saif Al Suwaidi, Director General of ADFD and His Excellency Gonzalo Saglione, Minister of Economy from the Province of Santa Fe, signed the loan agreement outlining the terms of collaboration at the Fund’s headquarters in Abu Dhabi. Several high-ranking officials from both sides were also present at the signing.

Speaking on the occasion, His Excellency Mohammed Saif Al Suwaidi said: “ADFD is proud to ink a partnership with the Government of Argentina to enable the country to achieve its outlined strategic priorities. Over the years, business, trade and friendly bilateral ties between the UAE and Argentina have continued to strengthen and grow.”

He added: “Water is a primary resource to enhance the quality of life of any nation. In addition to creating job opportunities across several disciplines including construction, project management and operations, this project is also expected to bring significant socio-economic benefits to the residents of the Santa Fe province.”

The funding will cover the supply and installation of the necessary equipment for the operation, control and maintenance, civil, as well as electromechanical works. Furthermore, it will include the construction of four pumping stations and reservoirs in different locations.

For his part, His Excellency Gonzalo Saglione praised the UAE’s role in assisting countries around the world with achieving their strategic growth objectives. He added that with the financial support from ADFD, water security in the province of Santa Fe in Argentina is set to become a reality and bring with it a plethora of economic benefits.

ADFD enjoys a successful track-record of developmental projects in Argentina. In 2016, the Fund signed an AED55 million (US$15 million) concessionary loan agreement with Argentina to finance the construction of the Nahave Hydropower project.