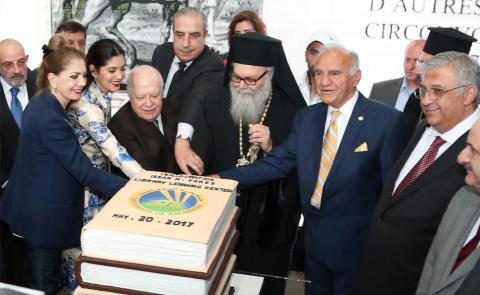 Under the patronage and presence of His Beatitude John X, Patriarch of Antioch and All the East, the University of Balamand inaugurated the “Issam Fares Library Learning Center” and the “Nour Fares Wing” at its main campus in Koura, on Saturday May 20, 2017, in the presence of the President of the Lebanese Republic represented by His Excellency (H.E.) the Minister of Defense Mr. Yaacoub Sarraf, President of the Lebanese Parliament represented by Deputy Mr. Nidal Tohme, the Prime Minister represented by Deputy Mr. Mouin Merehbi, His Eminence Metropolitan Elias Audi, His Eminence Metropolitan Joseph Zahlawi, His Eminence Metropolitan Bassilios Mansour, H.E. Mr. Issam Fares and his family, the President of the University Dr. Elie Salem, Vice-Presidents, deans and directors, and a big number of political, religious, academic, military and social figures, in addition to the friends of the University and media representatives. 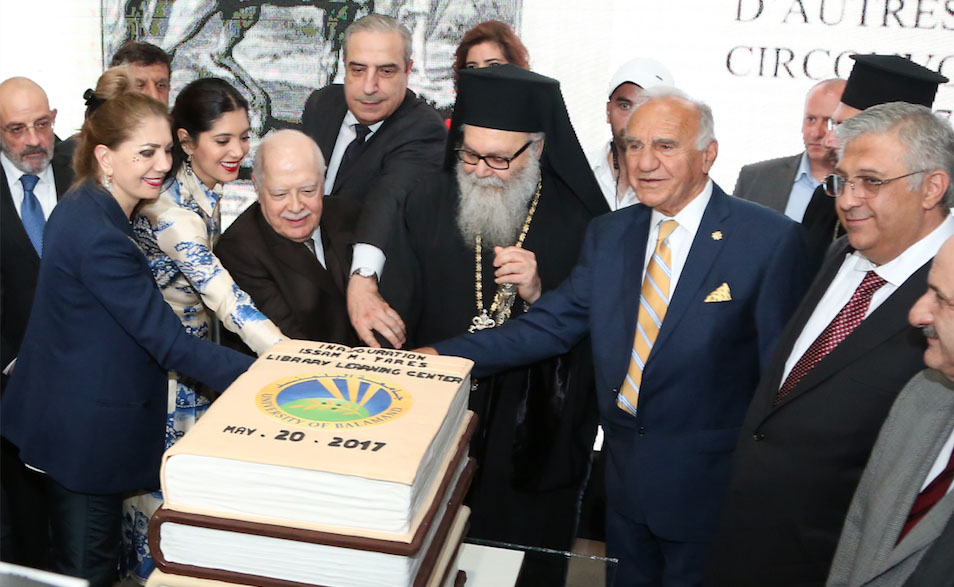 During the occasion, which was organized by ICE International Events, several speeches were delivered praising the qualities of Mr. Fares. The President of the University highlighted the strong ties between the University and Mr. Fares, saying, “We are used, at our University, to inaugurating a building, a hall or a pavilion, but inaugurating a library is a step on another level. When we say “library”, we remember the beginning of civilization which started in the East when the word was transformed from a sound coming out of the mouth to a line drawn by the fingers on leather, or on paper, or carved by hand on clay.

When we thought of building a unique edifice documenting the heritage and opening the doors to a new way of thinking, we needed support, and Mr. Issam Fares came to our minds. Without hesitation, the self-made authentic patriot gave us his support, adding to the many milestones bearing his name in the University a new one: a scientific free axis in an unlimited world. 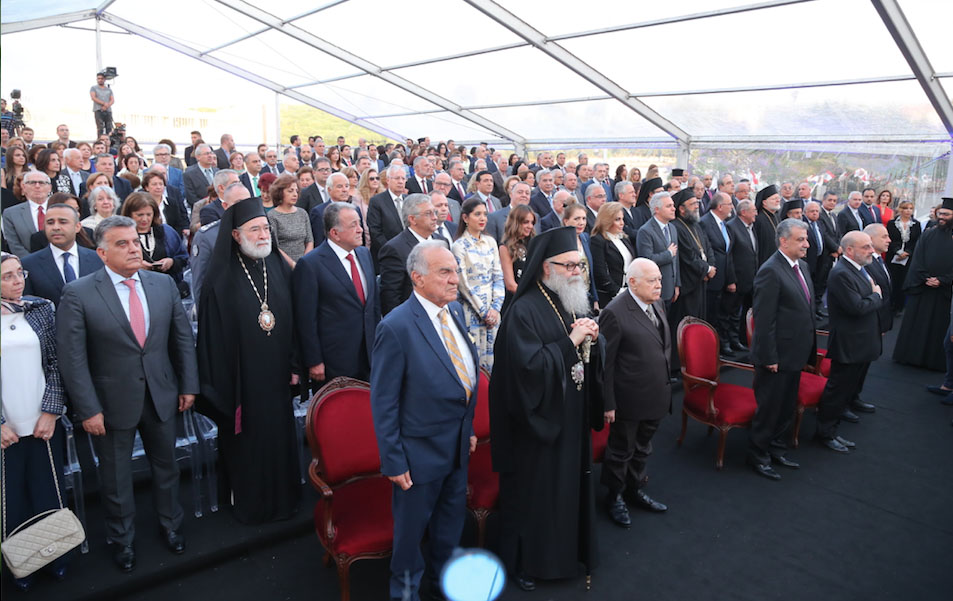 When his daughter Nour wanted to present a gift to the University of Balamand, she remembered Marc Anthony’s gift to Cleopatra, so she offered a collection of rare precious books to the Library and was allocated a special wing in her name.

On this occasion, I would like to note that “The Issam Fares Library” may be the only library in the region to lead through its academic excellence to the establishment of a new unique faculty in Lebanon: the Faculty of Library Sciences and Information Management.”

As for Mr. Issam Fares, he expressed his pride towards the University in general, and the Library in particular, stating, “We meet here today near the Monastery of Our Lady of Balamand, in an edifice overlooking Lebanon and the world. The University of Balamand stands here bearing the Orthodox message - the message of education, openness and pure patriotism, righteousness, justice and beauty. We meet to inaugurate the “Issam Fares Library – Learning Center”, a library that is at the heart of the University campus and the academic mission as well. I regard the Library as the most beautiful in its architecture and actually in its interior. Moreover, what adds beauty to this edifice is the wing bearing the name of my daughter Nour, which holds the core of a library that appreciates history, loves beauty and enriches the human mind. 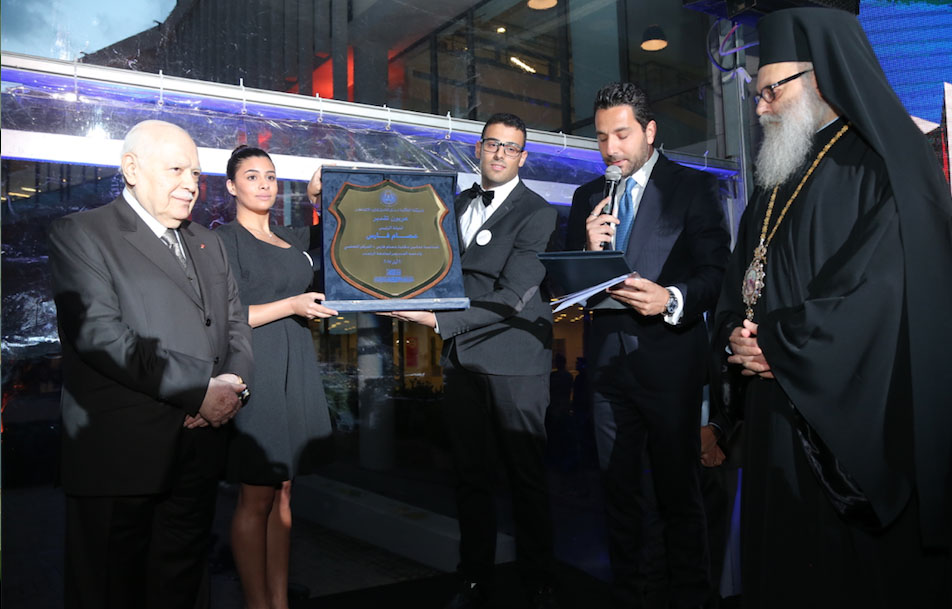 On this occasion, I would like to express my admiration towards the progress and the expansion of the University of Balamand in Lebanon and the Gulf. In fact, having obtained an official license from the United Arab Emirates, the University will operate in Dubai as of autumn 2018.”

Finally, His Beatitude Patriarch John X expressed his gratitude and said, “Through his long journey serving the public, Mr. Issam Fares didn’t search for fame, didn’t follow the path of arrogance and his actions weren’t characterized by pride; on the contrary, he yearned for humility, reverence and honor.

Accordingly, Mr. Fares realized that young people nowadays must seek knowledge, so he supported the associations that help in attaining his aim, which has led to the establishment of this library which is typical in its establishment, techniques and services that enhance the potential of students to carry out various types of research. 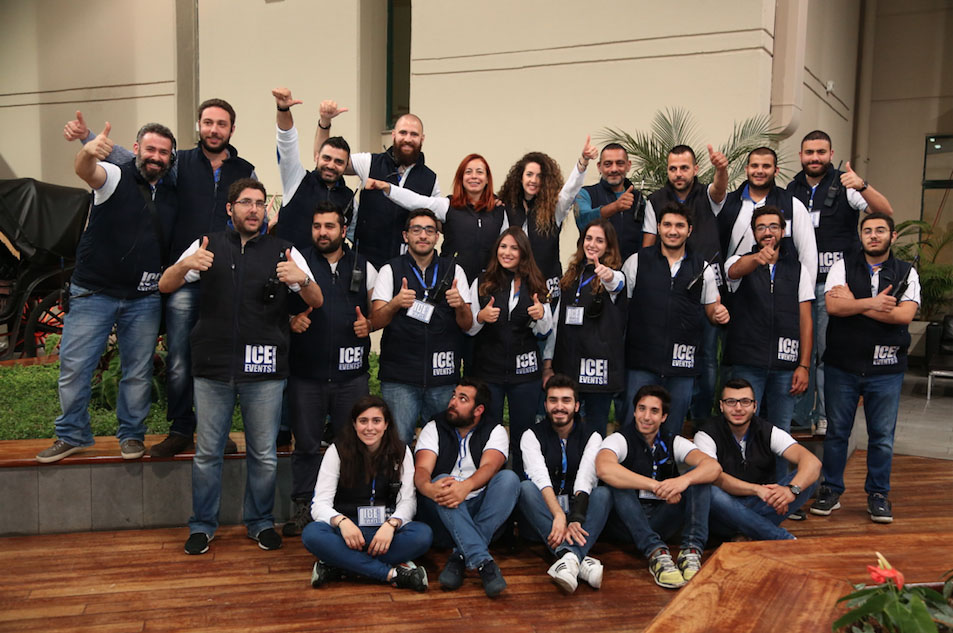 May God bless this noble man and generous benefactor who has put all his efforts in the service of his society and country.”

After the official inauguration, guests visited the different sections of the library and stopped at the “Nour Fares Wing”.

On Wednesday May 24, 2017,  The Issam Fares Faculty of Technoloy in Beino – Akkar will be inaugurated as well.