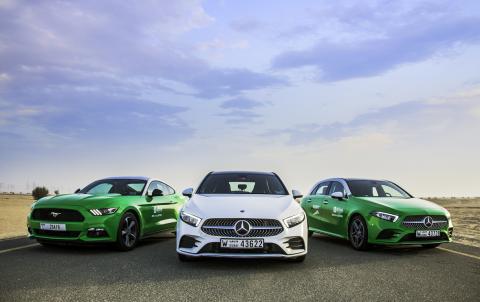 Udrive, the app-based pay-per-minute car rental service, has announced a USD 5 million Series B round of funding, in which it will welcome commercial, institutional and private investors.

Founded in 2017, the UAE-based start-up has undergone one previous round of funding, in which it raised USD 1 million and saw investors’ return triple. This second round underpins Udrive’s unprecendented growth in the market, while proving the welcomed reception of the pay-as-you-drive concept. Udrive anticipates a round of Series C funding will take place in another 18-months.

The new capital will allow Udrive to execute its ambitious expansion plans, such as increasing the number of premium cars in its fleet - including Mercedes, Audi and Mustang models - as well as expanding its service into Saudi Arabia and other strategically viable locations in the GCC.

With 73,000 registered users and over 478,000 trips recorded in just two years, Udrive is the market’s top performing pay-per-minute car rental service. Its diverse customer base spans the likes of UAE-based staff who travel frequently but don’t want to commit to purchasing a car, including airline staff and real estate agents, as well as families who don’t own multiple vehicles.

Hasib Khan, CEO and Founder of Udrive commented, “This is an exciting time for both Udrive and potential investors. When we launched just over two years ago, no one anticipated just how successful the concept would be, with many doubting how it would work in this region. We are incredibly proud to have proven those doubters wrong, while simultaneously delivering unprecedented return for our first round of investors.”

The notion of car-sharing has increased in prominence in recent years, with services such as Udrive streamlining the process, providing optimum convenience for users. In markets such as Dubai, a dense expat population also contributes to the popularity of car-sharing, with many reluctant to make a large investment in owning a car due to regular travel commitments or uncertainty in how long they’ll remain a resident. In addition to enhanced convenience, lower running costs and no need for personal investment, car-sharing has environmental and public benefits, including decreasing air pollution and reducing congestion on the roads.

“With over 1,300 people using the service in the UAE daily, and our plans to expand both our premium fleet and service across the GCC, we are confident investors will be attracted to the opportunity our Series B round of funding presents,” Hasib concluded.

Developed as a smartphone app-based service, Udrive offers affordable rental car services across Dubai, Sharjah, Abu Dhabi and Ajman. Udrive cars can be booked and reserved quickly and easily via a dedicated app, offering the most convenient car rental options.

With a simple and straight forward pricing scheme, members only pay for the time they drive. The pay-as-you-go service is available 24/7 and starts from 60 fils per minute and AED 99 per day, including fuel, public parking and insurance. Investors interested in more information are encouraged to visit http://www.Udrive.ae