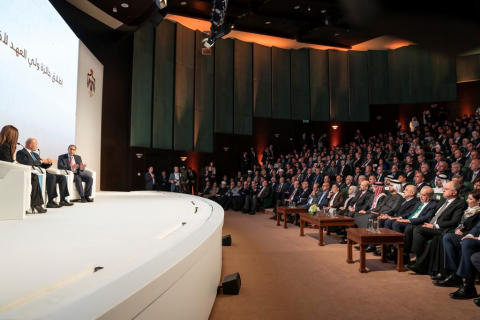 The announcement was made at the launch ceremony of a new initiative - the Crown Prince Award for Best Government Service Application that took place under the patronage and in the presence of His Royal Highness Crown Prince Al-Hussein bin Abdullah II of the Hashemite Kingdom of Jordan, in the Jordanian capital Amman. The event drew the participation of a high-level delegation from the UAE, led by His Excellency Mohammed bin Abdullah Al Gergawi, Minister of Cabinet Affairs and the Future, and several ministers.

With a prize money of JD100,000 (AED500,000), the first award of its kind in Jordan challenges university students to create innovative smartphone applications that provide user-friendly government services round-the-clock to enhance the customer experience and, ultimately, improve the quality of life. The award encourages collaborative design and co-creation between university students and government entities in Jordan.

His Royal Highness Crown Prince Al Hussein bin Abdullah II praised the mission and objectives of the award that encourages creativity and innovation among university students and seeks to leverage their ideas to improve and facilitate government services.

"The strong bilateral relations between Jordan and the United Arab Emirates serves as a model for harmonious Arab relations," said Jordanian Prime Minister Dr Omar Al Razzaz. "We cherish the partnership and cooperation between the wise leaders of the two countries and will continue to work in line with their directives to consolidate the synergies between our two nations at various levels.”

He pointed out that the Jordanian government has taken concrete steps to improve the performance of the public sector, raise its efficiency and enhance the participation of young people in decision-making and in public life, as well as to create an enabling environment that leverages their abilities and energies to unleash innovation. He added that college students in Jordan have the support and attention of the country’s leadership that is keen to involve them in the process of developing and designing government services with the vital element of creativity.

The Jordanian Prime Minister stressed the need for Jordanian government leaders to facilitate the task of students as they seek to find solutions to the many challenges facing their countries, and to hear their voice and provide all the means of support to them.

He added: “The partnership contributes to strengthening the economic, political and social ties between our two fraternal nations and reinforces our shared commitment to exchanging experiences in modernizing government work.”

His Excellency Mohammed bin Abdullah Al Gergawi highlighted the benefits of engaging the youth of the region in social development. He also commended the patronage of His Royal Highness Crown Prince Al-Hussein bin Abdullah II, stressing that it will provide a strong momentum to the award.

He said: “Our long-term partnership with Jordan in modernizing government work is part of our government knowledge exchange program that aims to share expertise and successful experiences. The young people of Jordan have time after time demonstrated their outstanding prowess in the technology sector, and we are confident they will use these strengths in further enhancing the government services in their country. In the UAE, the government has a successful track record in collaborating with the youth in developing government work, and we are pleased to be able to share our experience with our brothers in Jordan.”

In her speech, Dr Tammam Menko, Executive Director of the Crown Prince's Foundation in Jordan, said that the award will open the doors for young people to showcase their innovative projects and contribute to supporting the government sector through creating applications and digital solutions in all sectors.

She added that the award reflects the keenness of the Crown Prince to help nurture the skills and talent of Jordan’s young people and open up opportunities for them to play an active role in the development process.

For his part, Sami Dawood, Secretary General of the Jordanian Prime Ministry, stressed the importance of the recent agreement in enhancing synergies in improving government performance between Jordan and the UAE. He noted that the agreement will serve as a catalyst to incubate a number of initiatives aimed at achieving a renaissance and a qualitative shift in the level of government performance.

He pointed out that the Crown Prince Award for Best Government Service Application is one of the most important initiatives launched to date that invests in students. He added that the government is continuing to develop institutional performance and facilitate procedures and upgrade services.

The partnership between the governments of the UAE and Jordan encompass four key aspects – exchanging knowledge, utilizing development models in government work, implementing best practices in government and smart services, corporate performance, innovation, and excellence, and building leaders and capabilities.

The health category spans the full spectrum of health care – from prevention to diagnosis, treatment, and health services. It covers the entire customer journey from making an appointment to receiving treatment, in addition to telehealth solutions, chronic disease management, lifestyle and health awareness.

The education category comprises management of educational institutions and other educational services.

The next category is dedicated to transportation with a focus on remote locations and provinces, elderly people, low-income segments, and people of determination.

The criteria for the Crown Prince Award for Best Government Service Application draw inspiration from the Emirates Government Service Excellence Program, launched by His Highness Sheikh Mohammed bin Rashid Al Maktoum in March 2011. In line with the UAE’s vision to become one of the best countries in the world, the initiative aims to raise the efficiency of government services to a seven-star level as per the Global Star Rating Program while enhancing the customer experience.

The award has adopted three main criteria to choose the best mobile government services. These include efficiency that is weighted at 40 percent and measures the success of the applications in resolving issues that were raised through customers’ feedback and suggestions.

The second criterion, ease of use, weighs in at 40 percent and focuses on the functionality of the applications, including user-friendly design, ease of browsing, and simplicity of obtaining the services.

The third criterion, innovation, is weighted at 20 percent and measures the level of creativity in identifying solutions to unprecedented challenges.