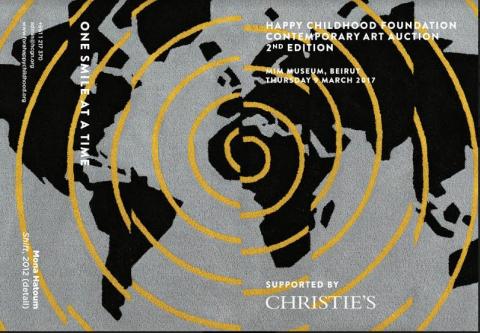 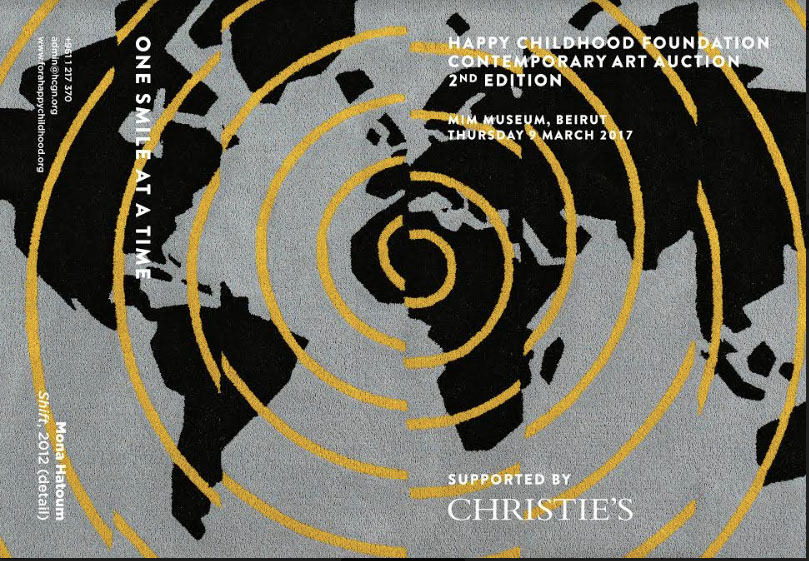 After the success of its first auction in 2015, the Happy Childhood Foundation - Lebanon decided to organize a second edition supported by Christie’s on Thursday March 9th 2017 at the MIM Museum.

Christie's, one of the leading auction houses in the world, will be offering their expertise for the second time, thus ensuring best practices and a highly professional environment. International artists such as Mona Hatoum, Huguette Caland, Dia Al- Azzawi, Joana Hadjithomas and Khalil Joreige, Martin Kline and many others, embraced the cause, also  adding a philanthropy dimension to their work and enhancing the sense of purpose of this particular event.

"This time, we focused on contemporary artists only, increased the number of lots and partnered with leading galleries namely AGIAL art gallery, Ayyam gallery, and Galerie Janine Rubeiz in the Middle-East, as well as White Cube gallery in London. In addition, we formed an Advisory Board of experienced art collectors who helped us in setting the strategy of the auction and in selecting the art works" said Amira Rizk (member of the foundation’s Board of directors and President of its Events Committee).

The Happy Childhood Foundation (HCF), originally the Philippe Hatem Foundation for a Happy Childhood, has a simple objective which is to bring happiness and put smiles on the face of as many children as possible, without any form of discrimination. Established in April 2010 by Mr. Georges Hatem following the death of the young Philippe Hatem at age 11, the foundation provides support in the fields of basic necessities, protection, health, education, and recreation. The flagship initiative of the foundation in the country is the Laetitia Hatem Rehabilitation Centre [LHRC] that HCF Lebanon established at Hotel-Dieu de France hospital [HDF] in Beirut, with the technical support of one of the best rehabilitation hospitals in the world.

Thousands of children have already received support from HCF Lebanon; the LHRC alone has provided about nine thousand physical, occupational and speech therapy sessions to hundreds of children fully supported by the foundation, with remarkable cases of recovered health, autonomy, and hope.

Childhood is sometimes defined as the time of Happiness; the mission of the Happy Childhood Foundation is to make the less fortunate children happier, eager to live, and to help them mature into good people.

"Should you decide to join us on this journey to a happy childhood, please do not consider your support and generosity as an act of charity, but rather as the best investment that you will ever make ... an investment for a better world" says Mr. Hatem, the President of HCF.