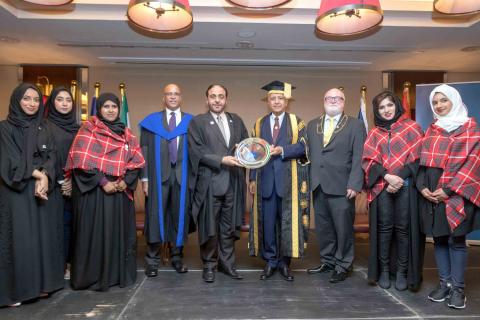 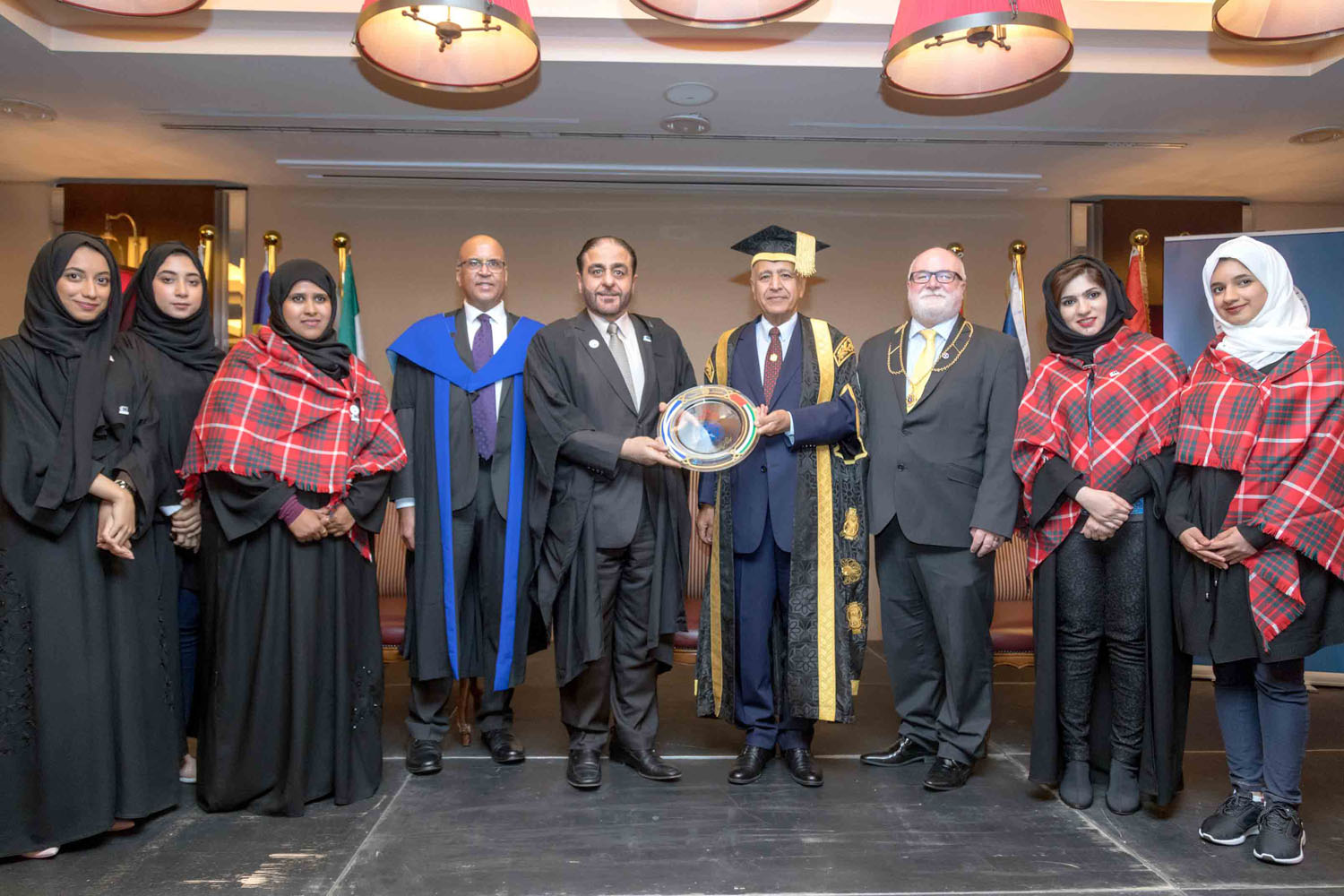 Al-Awar witnessed the graduation of 72 female students from 17 universities, colleges and institutions, including HBMSU, who participated for the first time in the program called the ’History, Culture and the Contemporary World.’ The first batch of participating female students falls under the framework of a Memorandum of Understanding (MoU) between the two sides signed to instill the values ​​of mutual understanding and multiculturalism among students and professors of the university. This is in line with the vision of the wise leadership to promote openness, understanding, and peaceful co-existence to boost the UAE's leadership on the international stage. The program provided the HBMSU female students with a unique cultural and civilizational experience that paved the way for an in-depth understanding of Scotland's long history and its role in contemporary world.

During the graduation ceremony, Dr. Al-Awar joined a group of eminent personalities led by Bill Campbell, Deputy Lord Provost of Dundee. Other key attendees were Mirza Al-Sayegh, Chairman of the Board of Directors of Al Maktoum College of Higher Education; H.E. Saeed Mohammed Al Raqbani, Advisor to H.H. the Ruler of Fujairah and Chairman of the Board of Trustees of the University of Fujairah; Dr. Tayeb A Kamali, Director General for Education & Training Development at the UAE Ministry of Interior,  former Vice Chancellor of the Higher Colleges of Technology (HCT), and member of the Board of Directors of the Police College in Abu Dhabi; Prof. Reyadh Al Mehaideb, Vice President of Zayed University; Lord Murray Elder, College Chancellor; and directors and officials of participating universities and colleges.

Dr. Al-Awar said he is proud of the HBMSU female students’ skills and abilities to enhance the interaction between the UAE and international cultures, pointing out that they succeeded in representing the country in Scotland. They have provided a model for understanding, coexistence, and tolerance, the UAE’s main pillars inspired by the wisdom of the late founder Sheikh Zayed bin Sultan Al Nahyan.

He added: “Our female students’ participation in the Academic Training Programme (ATP) is a step forward in providing them with extensive educational experiences in the areas of cultural pluralism and civilizational participation and providing them with the skills of effective leadership in the 21st century. This in line with the directives of H.H. Sheikh Hamdan bin Mohammed bin Rashid Al Maktoum, Crown Prince of Dubai and President of the University, to invest in young people, as they are considered to bring ‘hope, optimism, positive energy, creative thinking, openness to the world, and the ability to develop for the better.’”

Dr. Al-Awar concluded: “We are honored to participate in the Academic Training Programme (ATP), which was a unique and successful program designed to provide young generations with knowledge, experience, and skills needed to promote dialogues with global cultures as a strategic priority for the UAE. The unique experience of the Summer School programme has been a major boost to our efforts to instill the values of knowledge, cultural, and openness of the younger generations who will be our future leaders. We look forward to participating in more academic and training programs in the field of multiculturalism within the fruitful framework of cooperation with the Al Maktoum College of Higher Education in Scotland. Our collaboration forms part of our shared goal of spreading the principles of tolerance, co-existence, and communication among people. We would continue to leverage our potentials and resources to serve our aspirations, enrich knowledge, stimulate scientific research, and accelerate progress in the education sector in line with the requirements of the modern times.”

The program featured a series of lectures, visits, seminars and discussions that provided an opportunity to enrich knowledge and enhance cultural and communication skills of students. It also raised their global and intellectual awareness through the cultural exchange program with Scottish people.

Over 30 hours of training have been conducted on topics such as critical and analytical writing of issues related to history, culture and the contemporary world. The attendees also participated in theoretical discussions and interactive and applied activities in specific contexts such as multiculturalism and diversity in the United Kingdom and the UAE. The course focused as well on the relationship between Muslims, religions, cultures and other societies in an environment dominated by globalization and multiculturalism in the 21st century. 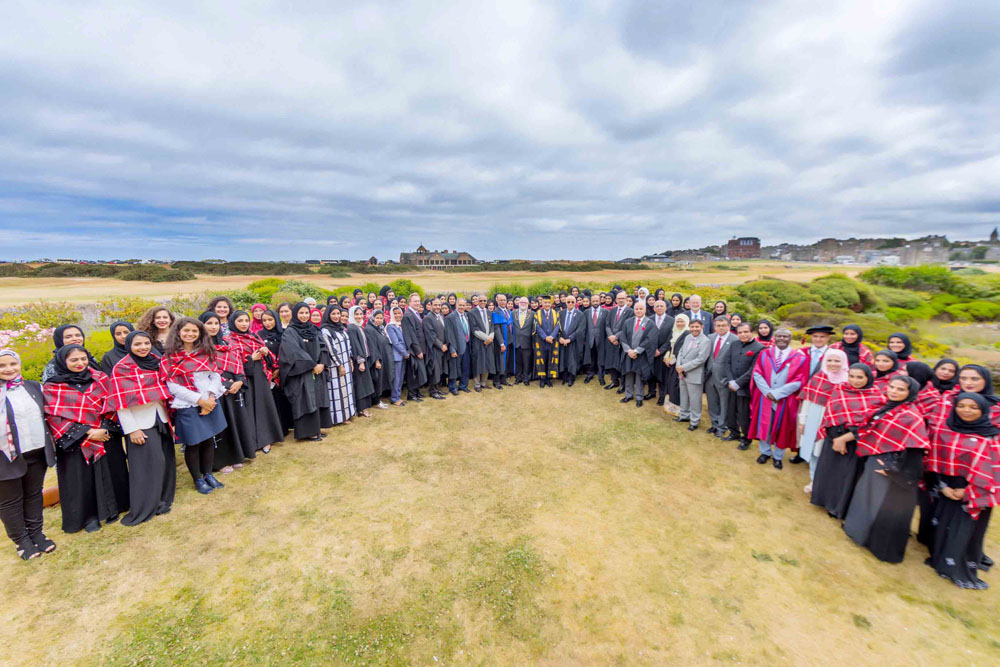 HBMSU and the Al Maktoum College of Higher Education’s strategic partnership is based on strengthening open discussion channels on issues of common interest, in particular enriching knowledge stocks, stimulating scientific research and advancing progress in the education sector according to the requirements of the modern times. The two sides are working to expand investment in training related to such vital areas as multiculturalism, globalization and contemporary issues, ethics and law, Islamic economics and finance, and gender and development - all of which are at the heart of the objectives of UAE Vision 2021.