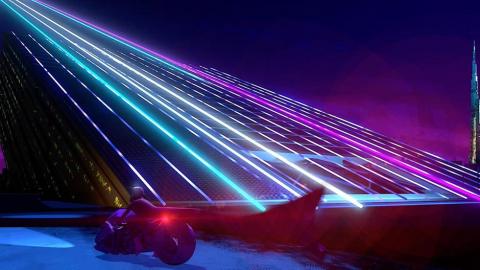 A short video in which a young girl rides a motorcycle past historical sites in Saudi Arabia before arriving at the Expo 2020 site in Dubai has been released online.

The video is intended to promote the world fair, with less than 100 days before it opens, organisers said.

The footage ends with the rider arriving at the Saudi pavilion on the Dubai South Expo site, with Burj Khalifa seen in the background.

On her journey to Dubai, she rides past ancient villages, rock-cut tombs and sandstone cliffs for a show of Saudi Arabia’s archaeological treasures in a clip titled Cloud Walker.

“With less than 100 days to go, the kingdom looks forward to welcoming the world to its pavilion. Soaring upwards, its prism-like structure sends a clear message: for Saudi Arabia, the sky is the limit,” a statement said.

“The video stars a young woman who embodies the aspirations and drive of Saudi youth, riding past some of the kingdom’s famed monuments on a futuristic motorbike.”

It builds on a theme of the young pursing their dreams, and seeks to build excitement about Saudi Arabia's participation in the first Expo to be held in the Arab world.

Work on Saudi’s massive structure, the largest second only to the UAE’s falcon-winged pavilion, was completed last year.

Spread over an area equal to two football pitches, the six-storey high creation features 2,030 sparkling crystals resembling a window opening to the sky.

Saudi Arabia's Vision 2030 is a programme to diversify the nation's economy, reduce dependence on oil, increase the participation of women in the workforce, lower unemployment and increase foreign investment.

In the three years since the ban on women driving in Saudi Arabia ended, many have taken to the road in cars but several have chosen motorbikes and are keen to build a community of female bikers.

Expo 2020 Dubai will open in October, with more than 150 countries participating after it was postponed by a year because of the coronavirus pandemic.