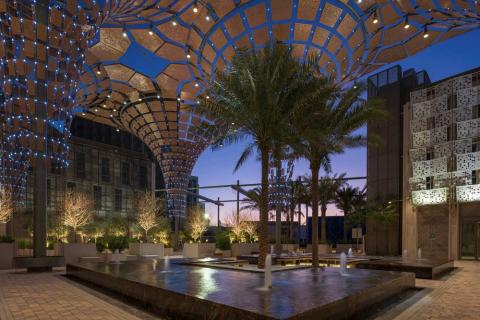 Leading urban design and planning specialists and government officials from around the world gathered virtually to deliberate how Dubai and other cities can be highly liveable places — spaces that foster business ecosystems as well as support balanced natural and urban environments.

The Executive Council of Dubai panel discussion talked about how we can effectively transform our cities in order to make them more resilient, robust and adaptable for future generations.

Hosted by Expo 2020 and delivered in collaboration with the United Nations Human Settlement Programme (UN-Habitat) and Siemens, Expo’s Premier Infrastructure Digitalisation Partner, Urban and Rural Development Week addressed how the world’s population will live and grow in harmony with our planet.

HE Dawoud Al Hajri, Director General, Dubai Municipality, said: “By placing people at the centre of the urban design process, we should be able to create outcomes that are beneficial for everyone, so that our cities and quality of life become increasingly better over time. We are in the process of developing the new Urban Plan 2040, which is highly focused on increasing the wellbeing, activity and health of the nation through public-realm interventions, including walkability, cycling, sports and the development of socially inclusive and universally accessible designs. We are developing a city that is vibrant, with liveable communities, by enhancing citizens’ experiences with open public spaces throughout the city. Our vision is to become the best city for living.”

Eng. Sanaa Al Aleeli, Director of Urban Planning & Studies Department, Dubai Municipality, said: “At a strategic level, we are currently working on Dubai Urban Master Plan 2040, which is a long-term plan to achieve the vision of making Dubai the best city for living. We will place people’s happiness and wellness at the centre of any planning initiative. We defined five pillars in a framework for the city-centric plan – participation, choices, accessibility, mobility and quality – which will be articulated through strategies, programmes and performance indicators to monitor implementation.”

Speaking about the importance of the city masterplan in creating pedestrian-friendly environments, the Hon Mxolisi Kaunda, Mayor of Durban, South Africa said: “The promotion of non-motorised transport is important. It reduces the travel costs of already financially-stressed residents in our cities. It promotes health and wellbeing. Most importantly, it reduces the emissions of greenhouse gases in urban areas… Durban has already established a series of cycling routes within the city and surrounds. We are currently expanding its network to accommodate both professional and recreational cyclists… As part of our five-year plan, about 88 corridors have been identified, of which 31 have been prioritised to have a high range of usage that benefits large numbers of existing and potential non-motorised transport users across the municipality.”

Diana Alarcón González, Chief Advisor and Director of International Affairs, Mexico City, focused on the city’s people-centric approach to governance: “We have a structure of governance where people’s participation and consulting processes take place on a regular basis… For example, we are just starting a very wide and broad consultation process for the long-term development plan for the city – our Vision 2020-2040. Another example of the kind of things that have to go through consultation includes planning permission for building structures larger than 3,000 sqm. The consultation process will focus on the impact this will have on the local community, who will have a say on such a large project. Additionally, whenever there are changes in what we call conservation land – the areas in which indigenous populations live – there has to be a process for consultation as well.”

Discussing the impact that hosting a World Expo has had on Milan, Dr Davide Ponzini, PhD, Associate Professor of Urban Planning, Politecnico di Milano, Italy, said: “Expo 2015 was a turning point for Milan... The celebration itself took place on a large platform on the outskirts of the city, which is still being redeveloped along with the surrounding district. There was also a smaller scale set of events that was promoted in Milan under the banner ‘Expo in the City’. It was a very powerful set of more than 45,000 events during the year of celebration of Expo 2015. Over 1,000 sites were used across the city and were transformed in order to host these kinds of events. There has been a long-lasting impact in terms of the change of the public realm, as well as certain buildings to host events. Milan is now entering the planning for the 2026 Winter Olympics, which I hope will use a similar strategy of spreading the events across the city.”

Divya Prakash Vyas, Deputy Regional Director, South & West Asia, C40 Cities, said: “We need to have an approach that looks at humanising infrastructure because the majority of our cities have large infrastructure that is not very responsive to people’s needs… For instance, we have land use plans and structure plans that have their own limitations – these plans need to be complemented by focused, small-scale interventions, such as local area plans, and focus on urban design, which ensures the public realm is integrated with the surrounding development, not creating islands of excellence. It’s an approach where public spaces are accessible to all, irrespective of the type of development.”