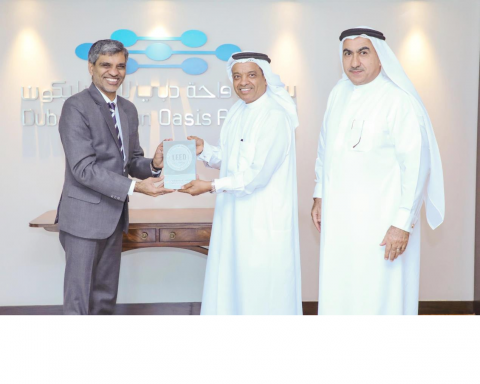 Dubai Silicon Oasis Authority (DSOA), the regulatory body for Dubai Silicon Oasis (DSO), the integrated free zone technology park, announced that it has obtained the Leadership in Energy and Environmental Design (LEED) v4.1 Platinum certification in the Operations and Maintenance (O+M) category for its High Bay Building in DSO.

Dr Juma Al Matrooshi, Deputy CEO for Operations and Client Affairs at DSOA, received the certificate from Mahesh Ramanujam, President and CEO of the U.S. Green Building Council (USGBC), in the presence of Engineer Khalil Shalan, Vice President of Operations and Facilities at DSOA, and other representatives of the two entities.

Dr Al Matrooshi said: “The LEED Platinum certification of the High Bay Building underscores DSOA’s commitment to implementing international standards that ensure the provision of the most efficient services to its business partners in the free zone. In addition, DSOA is proud to host two other LEED Platinum-certified buildings – the Techno Point Building and DSOA Headquarters. These achievements encourage other companies and free zones in the UAE and the wider region to follow suit and adopt sustainable solutions.”

He added: “The award also aligns with the UAE’s efforts to create an environment that inspires the public and private sectors to develop sustainable projects, as evidenced by Dubai’s Platinum rating in USGBC’s LEED for Cities certification, announced on April 18, 2019. Notably, Dubai is the only city in the Arab world to hold this distinction.”

DSOA implemented several environmental initiatives in line with its smart city strategy, including the replacement of 2,000 traditional light bulbs in the streets, roads, and public buildings at the hi-tech park with energy-saving LED lights that resulted in reducing its total energy consumption by over 50 percent.

The smart lighting system, which is linked to the integrated building management system at DSO, ensures continuous, seamless, and autonomous street lighting operations and remote control of lighting output. This contributes to the rationalization of energy consumption, enables the monitoring and reporting of the lamp performance and error detection, and facilitates predictive maintenance.

DSOA has also installed an integrated water recycling and smart irrigation system at its premises. Its wastewater treatment plant has processed 2.5 billion imperial gallons of water to date. The system currently waters more than 3,000 palm trees across 70,000 square meters, with plans underway to expand this to 200,000 square meters by 2020, which represents around 20 percent of the public green area in the free zone.

DSOA registered significant achievements in energy efficiency through introducing a host of smart environmental initiatives. The Authority succeeded in reducing its cumulative energy consumption by 33.67 percent, surpassing the 30 percent target set out in the Dubai Integrated Energy Strategy 2030.