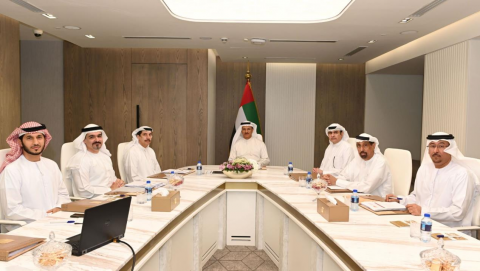 The Dubai Islamic Economy Development Centre (DIEDC) held its first board meeting of 2019 that reviewed the progress of strategic initiatives made in 2018 and also examined the Centre’s action plan for 2019. Chaired by His Excellency Sultan bin Saeed Al Mansouri, Minister of Economy and Chairman of DIEDC, the meeting convened all members of the Centre’s board.

During the meeting, His Excellency Sultan Al Mansouri confirmed that Dubai has successfully maintained its leading status as the global capital of the Islamic economy, and the go-to destination for Islamic economy’s stakeholders and professionals due to its ability to withstand economic fluctuations.

His Excellency Al Mansouri said: “The 50-year Charter, issued in January 2019 by His Highness Sheikh Mohammed bin Rashid Al Maktoum, Vice President and Prime Minister of the UAE and Ruler of Dubai, gives the Islamic economy a new push towards sustainable growth. Dynamic Islamic economy sectors can now embark on a new path of development and growth, drawing inspiration from the articles set within the Charter, particularly those linked to the Dubai Silk Road and the Geo-Economic Map of Dubai, which aim to strengthen Dubai's status as a global capital of economy, investment, and trade.”

He added: “The objectives of the 50-year Charter align seamlessly with those of the DIEDC Strategy to position Dubai as the global capital of Islamic economy and a pioneer in the field that attracts industry leaders from around the world. In addition, both focus on the diversification of the UAE economy and on continuing to facilitate an environment that promotes innovation and entrepreneurship.”

His Excellency highlighted that the Islamic economy has more than proven its ability to keep pace with the technological developments of the Fourth Industrial Revolution. To further boost its credentials in line with the Dubai: Capital of Islamic Economy initiative, the emirate is now seeking to launch new digital programmes and projects that will contribute significantly to its transition to a knowledge-based economy.

The Minister of Economy stressed that the action plans of the DIEDC Strategy are witnessing remarkable progress, due to the strong collaboration and team work between the Centre and its strategic partners from the public and private sectors. This does not only reflect positively on the Islamic economy sectors, but also on Dubai’s ability to attract global partners who are keen to capitalise on the growing investment opportunities offered by the Islamic economy.

His Excellency noted that the Islamic economy is witnessing rapid growth on a global scale, even in non-Islamic countries, due to the increasing demand for its products in many international markets.

The Charter is an extension of His Highness Sheikh Mohammed’s vision for the future of the global economy in light of the challenges experienced in the aftermath of the global financial crisis in 2008. The Charter underscores the urgent need to create a transparent economic system that strikes a much-needed balance between wealth creation and distribution. It also supports the directives of the Dubai government’s long-term development goals that correspond with the principles and ethics of the Islamic economy.

His Excellency Essa Kazim said: “It is interesting to observe that the Islamic economy has become a key component of the UAE’s national agenda for economic diversification, as evidenced by its increased contribution to the GDP. In addition, as highlighted by the Global Islamic Economy Indicator, the Islamic economy has played a major role in stimulating the economies of many countries around the world, including non-Islamic countries.”

For his part, Abdulla Mohammed Al Awar, CEO of DIEDC, reviewed the progress of the Dubai: Capital of Islamic Economy initiative and the action plan for 2019, including new initiatives in the pipeline.

Al Awar also reiterated that the Islamic economy is gaining traction as reflected in the UAE’s leading position in five main sectors of the Islamic economy, according to the State of the Global Islamic Economy Report 2018/19, titled ‘An Inclusive Ethical Economy’.

Going over the initiatives that are set to be launched this year, Abdulla Al Awar said: “In 2019, we will step up the momentum with a series of initiatives to further boost Dubai’s status as the global capital of the Islamic economy.”