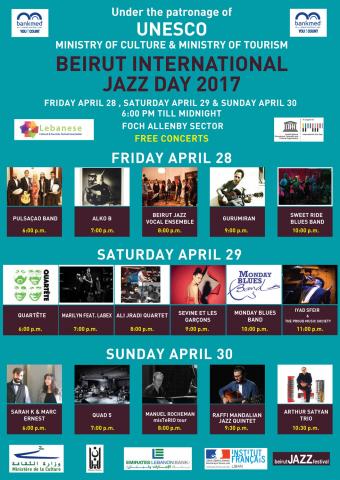 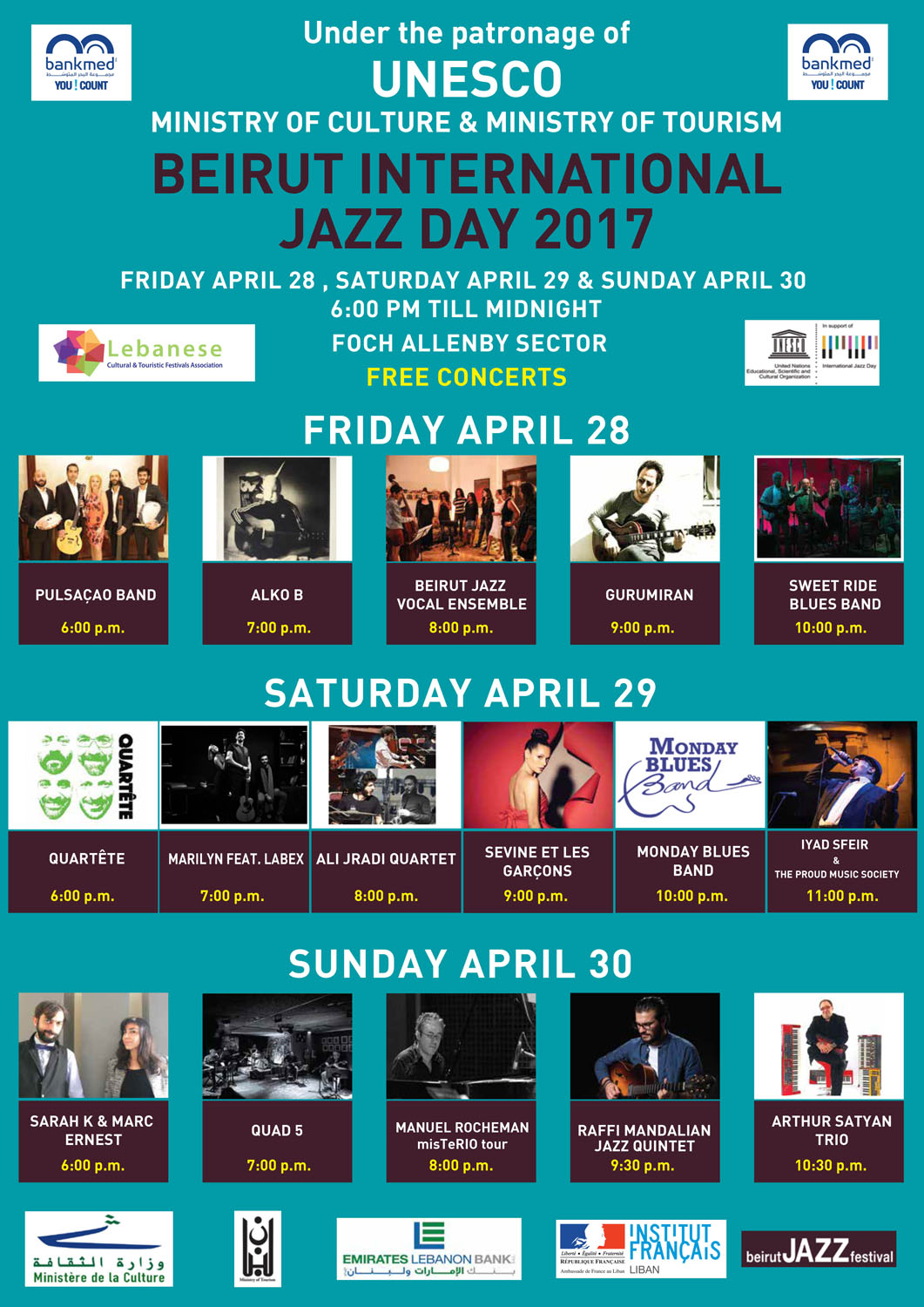 Under the Patronage of UNESCO, the Ministry of Culture, the Ministry of Tourism and the participation of the French Embassy and the French Institute, the Lebanese Cultural and Touristic Festivals Association and the Beirut Jazz Festival are organizing the 5th edition of the Beirut International Jazz Day, from April 28 till April 30 at the Foch Allenby area in Beirut Central District.

The 5th edition of the Beirut International Jazz Day will host 15 Jazz groups from Lebanon and the region and a guest group from France that has been especially invited by the French Embassy and the French Institute to mark this international celebration. This year’s edition will feature free concerts to Pulsaçao Band, Alko B, Beirut Jazz Vocal Ensemble, Gurumian and Sweet Ride Blues Band on April 28, Quartête, Marilyn Feat. Labex, Ali Jradi Quartet, Sevine et les Garçons, Monday Blues Band and Iyad Sfeir and the Proud Music Society on April 29, Sarah K and Marc Ernest, Quad 5, Manuel Rocheman Misterio Tour, Raffi Mandalian Jazz Quintet and Arthur Satyan Trio on April 30, the official Jazz Day that will witness the official ceremony at 8h00 p.m. in the presence of the Director of UNESCO, the French Ambassador and the Ministers of Culture and Tourism.

Attracting over 20,000 people, the Beirut International Jazz Day has been supported by UNESCO for the last five consecutive years. In 2011, UNESCO officially designated April 30 as International Jazz Day in order to highlight jazz and its diplomatic role of uniting people in all corners of the globe. Since 2013, Beirut has been participating in the celebration of this day, with the belief of the role of jazz in bringing communities, schools, artists, historians, academics and jazz enthusiasts together.

Mr. Joseph Kreidy in Charge the Culture Sector at UNESCO - Beirut Office highlighted the role of jazz in the world and especially in Beirut by saying: “Beirut International Jazz Day was born 5 years ago to raise awareness of the need for intercultural dialogue and mutual understanding, and reinforce international cooperation and communication. For all these reasons UNESCO is still keen on celebrating International Jazz Day on April 30 and Beirut is always supporting this celebration and cause”.

For the occasion, Mr. John Kassabian, the Artistic Director of the Beirut International Jazz Day, said: “Our aim is to bring together groups of people from all over the world to enjoy and learn more about the art of Jazz. Our strategy is to make music and art accessible to everyone by promoting Jazz as an educational element. The Beirut International Jazz Day has now become an annual must-see cultural event in Lebanon, attracting people from the region”.

As for Ms. Randa Armanazi, Director of the Lebanese Cultural Festivals Association and the Organizer of the Beirut International Jazz Day for the past 5 years, along with the Fête de la Musique for the past 17 years, she expressed her gratitude towards all Lebanese and foreigners who participate in this day and said: “Beirut International Day is offering Beirut a way of communication with all other cities around the world celebrating this day. We are grateful for all Lebanese and foreigners who will participate in this year’s edition and we are expecting to have more than 30,000 attendees. The participation of all Lebanese and foreigners, children, young, adults, teenagers, is a proof that culture is rooted in our soil and the purpose of organizing this day is fulfilled”.

The Lebanese Cultural and Touristic Festivals Association whose members have organized many festivals and received the 2012 Time Out Best Music Festival Award for Fête de la Musique and 2016 Lebtivity most popular event 2015 in Lebanon, is organizing this year’s edition of Beirut International Jazz Day, with the sole motto for Nina Simone in mind: “Jazz is not just music, it’s a way of life, it’s a way of being, a way of thinking”.