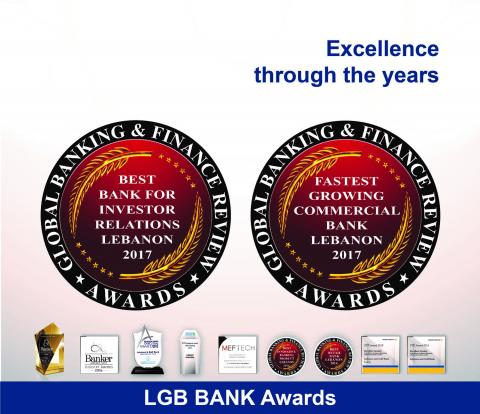 "The rapid growth of the Bank is a result of the quality of its services and its eagerness to provide the best banking products to its customers, as evidenced by the growth of customer deposits, assets and other indicators," said Mr. Samer Itani, Vice Chairman and CEO of LGB BANK. "The Bank's transparency, its successful operations and the management's commitment to the principles of governance are key elements that have helped us earn the confidence of investors, while LGB BANK’s growth in profit ratio provides shareholders with the profitability they desire and reassures them of having made the right choice."

LGB BANK's continuous efforts towards further enhancing its standing as one of Lebanon's Alpha banks and one of the biggest Lebanese banks have earned it many awards including: the World Arab Banking Executive Award for Excellence in the field of E-Banking and Mobile Banking by the World Union of Arab Bankers, the MEFTECH Award for the "Best Retail Bank", "Best Financial Transformation", "Best Credit Card" and "Best Co-branded Card" Awards by CPI Financial's Banker Middle East Magazine.

Today, the Bank continues to pursue more prestigious awards that testify to the institution's numerous achievements in all fields.

In terms of products, the Bank offers a comprehensive range of innovative and modern banking products through a network of 18 branches in Lebanon, in addition to a Cyprus branch and a Representative Office in Dubai.