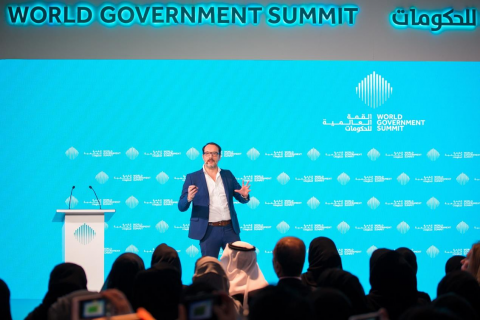 Making progress on society’s biggest problems requires governments to make better use of data, involve citizens, invest in employees, and collaborate with other sectors. This was the consensus at the ‘Design to Transform Government’ track in front of a full-house today at the seventh World Government Summit. The three themed sessions shed light on a more disciplined, systematic and design-related approach to solving public sector management problems.

Moderated by Alex Klokus of Futurism, the discussion followed the increasingly daunting paradox that governments face. He stated: “On the one hand governments operate in a complex environment and must deliver on an expanded set of policies, while on the other, governments are hampered by expectations and shrinking budgets. Government by design calls on public sector leaders to favor the rational and analytical over the purely ideological, and the abandonment of tools and techniques that no longer work.”

David McCandless, journalist and data visualization expert, kicked off the session with a presentation on ‘Visualizing Data for Better Policies’. With a passion for data information, McCandless sees the beauty in data and seeks to provide meaning to numbers that are difficult to comprehend. He stated: “By visualizing data, ordinary people like you and me are able to understand the bigger picture and to better relate to information. In that sense, data is brought down to earth.”

One of the main advantages of visualization is its ability to open-up information that does not lend itself to linear explanations. McCandless added: “I use design to tell stories and I often refer to data as the new ‘soil’ as it has the power to flower into something magical.” He also shared relatable visuals on topics ranging from Brexit to military spending, diseases and breakups.

Don Norman, Director of the Design Lab at the University of California, presented a fresh, fourfold formula to 21st century design during the ‘Community-Based, Human-Centered Design’ session. This entailed addressing complex societal issues, focusing upon people, employing human-centered design and intermediating between parties. This is where designers come into play as they bring experts together to facilitate change. He elaborated on the importance of relying on the community for expertise. “The community is made up of people who understand. The solution does not lie in simply merging top officials with the community as they speak different languages but rather applying small, incremental and opportunistic steps,” he said. This theory is taken from Charles E. Lindblom, an Associate Professor of Economics at Yale University, who wrote The Science of “Muddling Through”.

Best known for his work with Apple, Tim Kobe, Founder and CEO of Eight Inc., provided insights on ‘Designing the Future Government Services’, emphasizing that great leaders create experiences. “You can contribute great design to government and political leaders. Actually, the government could have the greatest impact in changing people’s lives and this comes from an inherent understanding of connecting people in order to produce meaningful relationships.” To get a ‘return on experience’, Kobe’s eight key principles are: holistic experiences, utilizing uncommon insights, implementing mono-channel solutions, avoiding best practices, expressing empathy, using word of mouth, being a risk taker, and irrational loyalty.

A recurring emphasis was placed on the importance of human experience and the fact that people are at the core of driving design-related solutions. With Generation Z growing up in a digitally transformed world, design has a critical role in driving innovation and promoting positive emotional engagement.