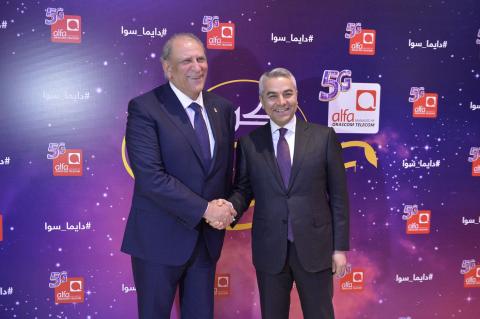 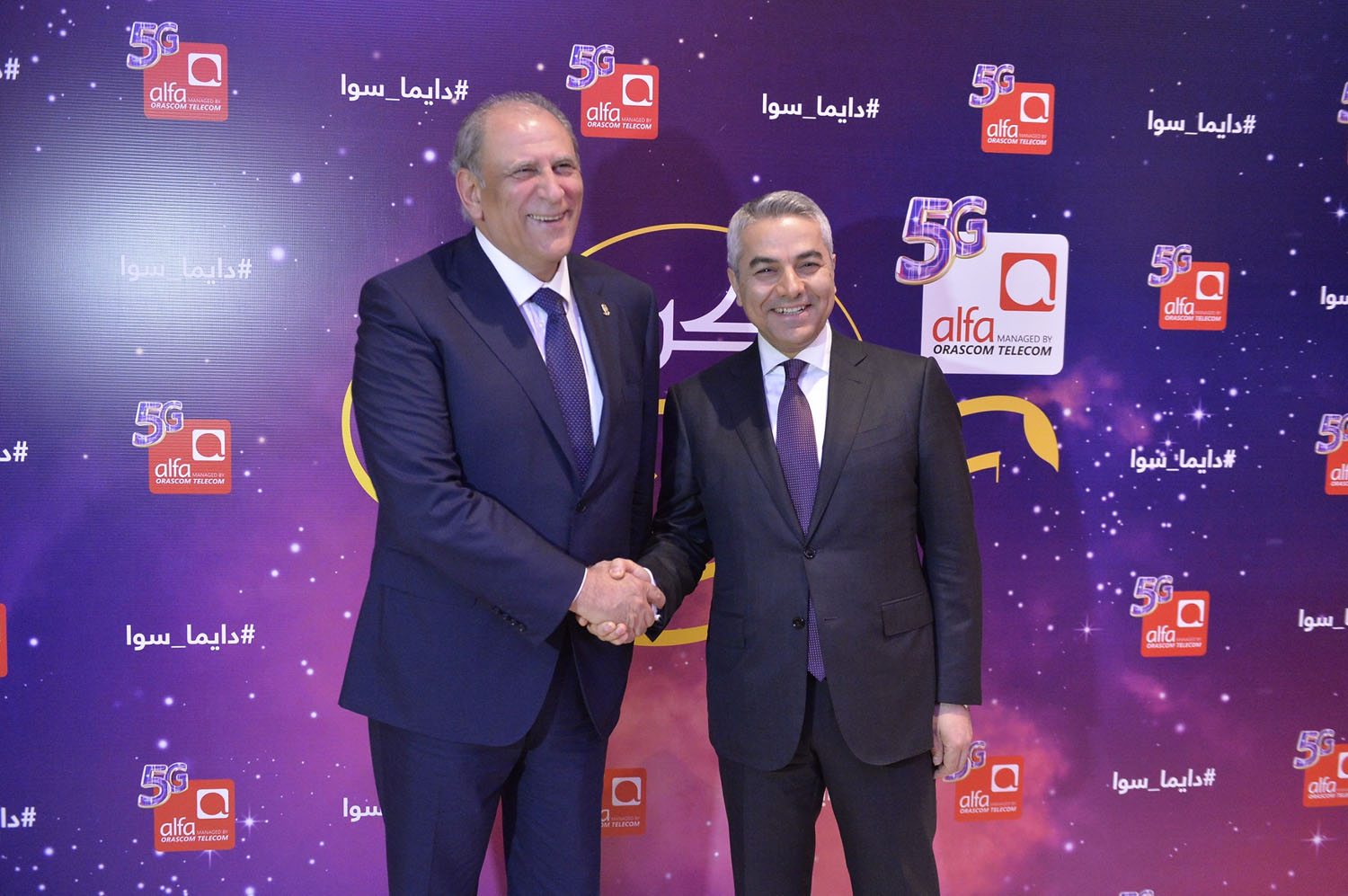 Under the auspices and in the presence of His Excellency the Minister of Telecommunications Jamal Jarrah, Alfa, managed by Orascom TMT, held its annual Iftar in honor of the press and media at the Phoenicia Hotel in Beirut. It was attended by Alfa CEO and Chairman Marwan Hayek, the head of the Lebanese Press Federation Aouni al-Kaaki, the Director General of Construction and Equipment  at the Ministry of Telecommunications (MoT) Naji Andraos, the Director General of Investment and Maintenance at MoT Bassel Al Ayoubi, the advisor to Minister Jarrah Nabil Yamout, the Chairman and Director General of Ogero Imad Kreidieh, the head of the Owner Supervisory Board at MoT Naji Abboud,  and media figures from audio visual, written and electronic press, in addition to directors and advisers from MoT and members of Alfa’s board of directors.

“Our gathering in this holy month is titled Always Together, as a tribute to the efforts of the media community who accompanies and supports us in all of Alfa’s milestones,” said Hayek. “Two important events for Lebanon took place recently: first, Lebanese director Nadine Labaki won the Jury Prize at the Cannes Film Festival for her movie Capharnaum. I am pleased to announce that Alfa was the film’s main sponsor and would like to congratulate Labaki and the film’s crew for this achievement that honors Lebanon. Alfa’s support of Lebanese cinema is not new, as we also supported The Insult, which ran for the Oscars. Alfa is very proud to be part of the film industry and its success in Lebanon”. The second event took place in Khaldeh, said Hayek “where Ogero launched the first active cabinet with an Internet speed of 100 mbit per sec. We would like to extend our congratulations to Ogero on this awaited achievement”. However, added Hayek: “Alfa set the bar high and achieved tremendous speeds much higher than this speed and a hundred times the speed of 4G. On April 13, 2018, we reached a speed of 25 gigabit per sec during our first 5G live demo in Lebanon. It is an exceptional milestone that has established a bright future for the telecommunications sector, as 5G is pivotal in changing the way we communicate with each other and with the things around us”. Indeed, Hayek confirmed “5G is the foundation of the Internet of Things (IoT), which will develop the economy by $2 billion a year between 2020 and 2035. The media will greatly benefit from this technology, as evidenced on May 6, when media outlets covered the Lebanese elections via 4G. We faithfully helped transmit audiovisual content and proved our full readiness, and put all our capabilities to ensure the smooth running of the service”. 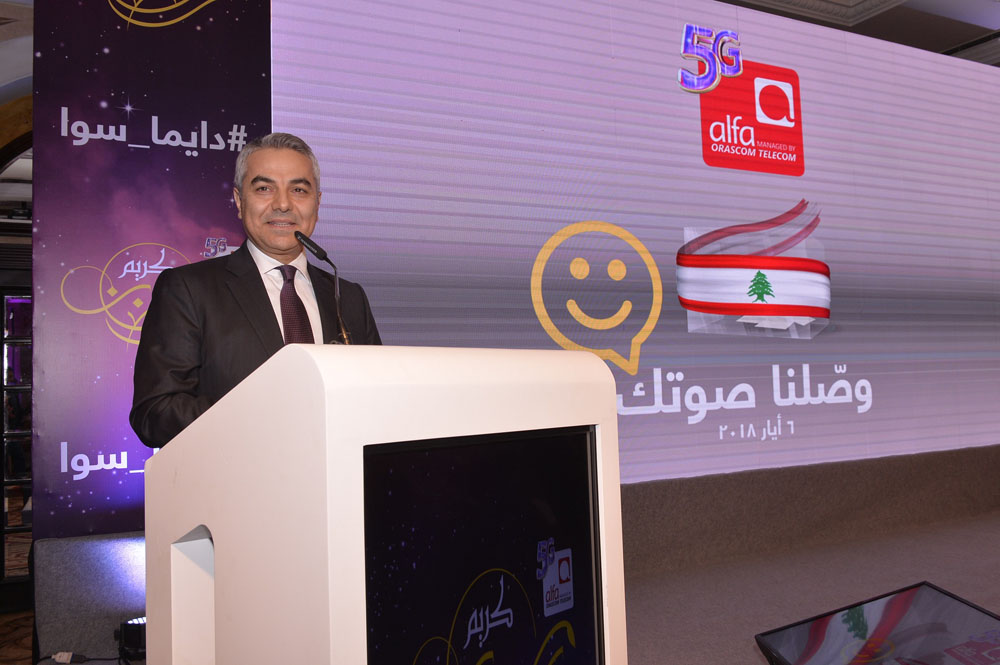 Data consumption on Election Day was the same as usual, at 88 terabytes, Hayek said. “There was a 12 percent decrease in the use of some applications such as YouTube, because subscribers usually use more video streaming on daily basis, of which YouTube is the main platform. Instagram usage also witnessed an 8 percent decrease while Twitter and Whatsapp had a 42 percent and 4 percent usage increase respectively”. Hayek pointed out that the number of calls received by the customer service number 111 remained at its usual average of 10 thousand calls. “Revenues increased by 62 percent on the day of elections compared to the average of the previous three Sundays,” he said.

Hayek said that Lebanon is achieving advanced ranking in terms of internet speeds, and criticism does not reflect the reality. According to the 2018 first quarterly report of OpenSignal, Lebanon was ranked in the 30th position out of 80 countries in terms of 4G speed, ahead of countries like Britain, France, Germany and Italy, with an average speed of 26 mbit per sec, and this is a natural result of investment and continuous work on the network, Hayek said, adding: “Lebanon advanced by five positions in terms of Internet speed during the previous three quarters, ranking second among the Middle East countries, with a very low margin compared to the first position. He concluded that there are ongoing efforts with the Ministry of Telecommunications to reconsider rates, promising an upcoming surprise in this regard.

“Alfa has been able to keep abreast of developments in the field of telecommunications worldwide with high professionalism,” Minister Jarrah said. “This is evident in the results presented by Mr. Hayek, whose highly appreciated efforts with his team enabled us to reach this level of development and efficiency to provide such a fine service to citizens. However, our ambition together with Alfa does not stop here, as we still strive to continue developing the sector and the networks and modernize the necessary equipment”.

“The high investment cost for the improvement of the networks is not an obstacle, because the goal is full development and reach a comprehensive coverage. We have started to work with Alfa on a very large project to achieve happiness through the telecommunications service. The development process is lengthy, but the most important thing is that we started this journey and we provided the necessary resources for this development to reach a stage where Lebanon will recover its position in the telecommunications sector. We need to follow up on what is coming in the near future, and what Alfa has achieved at the 5G level is promising”.

The Minister congratulated Alfa on all its achievements. “We have seen real progress during my tenure thanks to the serious work and consistent team that believes in the telecommunications sector and offers its expertise to invest in the right place for development,” he said. “My heart will always be with this sector from any future positions I will hold.”