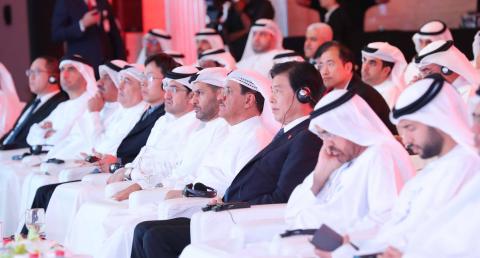 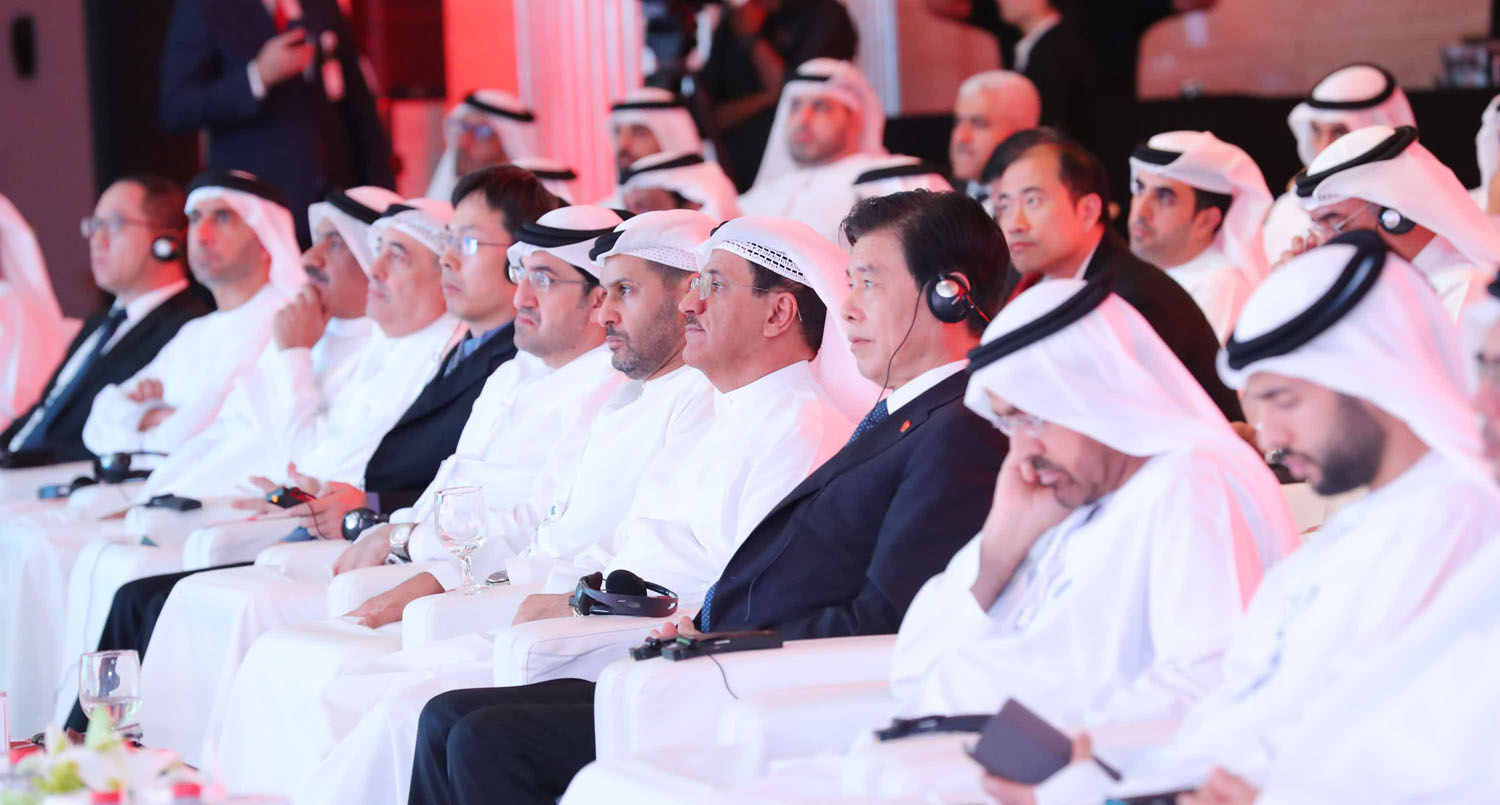 The UAE-China Economic Forum held in Abu Dhabi in the presence of H.E. Eng. Sultan bin Saeed Al Mansoori, UAE Minister of Economy, H.E. Zhong Shan, Minister of Commerce of PRC, H.E. Omar Al Olama, Minister of State for AI, and a number of senior officials and businessmen from both countries. The forum was held on the sidelines of the visit of H.E Xi Jinping, President of the People's Republic of China and his accompanying delegation, to the UAE.

The forum that was co-organized between the Ministry of Economy and the Abu Dhabi Chamber of Commerce and Industry, supported by the Ministry of Foreign Affairs and International Cooperation, Abu Dhabi Investment Bureau and UAE Chambers Federation, discussed ways of enhancing the strategic partnership between the two countries in various sectors of mutual interest. It also emphasized the importance of taking advantage of their respective economic, trade and investment assets and exploring further opportunities for future cooperation. 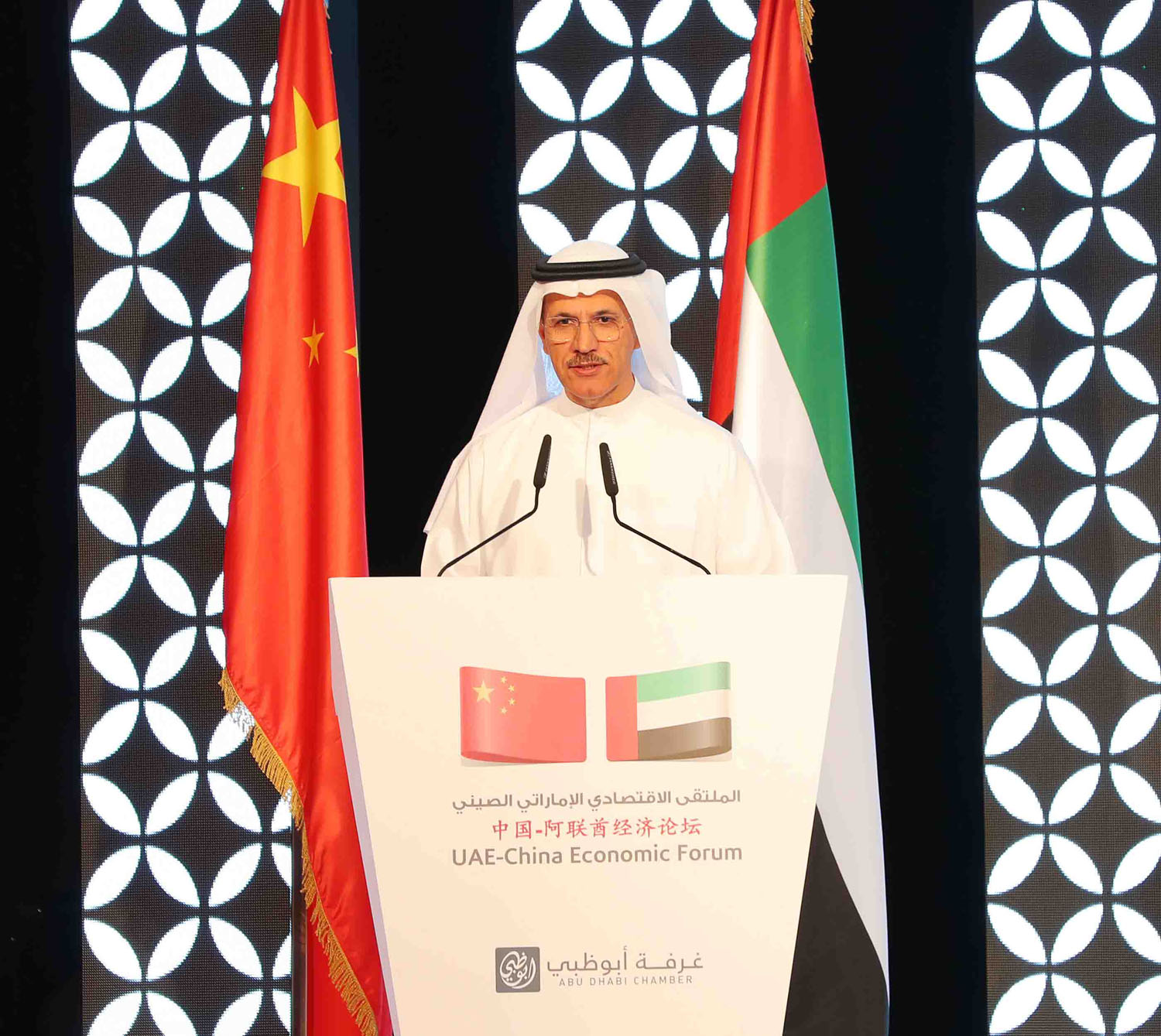 In his speech at the opening session of the forum, Eng. Sultan bin Saeed Al Mansoori, UAE Minister of Economy, said that the current visit of the Chinese President represents a historic step that strengthens the strategic partnership between both countries and deepens their cooperation in sectors such as manufacturing, SME’s, energy, renewable energy, Information Technology, telecommunications, free zones, investment, tourism, logistics and financial services. H.E added that the visit of President Xi Jinping will also help forge new understandings and formulate new agreements under the guidance of the wise leadership of both countries.

H.E. explained that the trade figures between the two countries clearly demonstrates the importance of the existing partnership and its promising future. The total non-oil trade exchange grew by 15.1 per cent from USD 46.3 billion in 2016 to more than USD 53.3 billion in 2017, which makes China the top trade partner of the UAE this year. On its part, the UAE accounts for 30 per cent of China's exports to Arab countries and 22 per cent of the total Arab-Chinese trade in 2017. The total non-oil trade exchange between the UAE and China is expected to touch around USD 58 billion in 2018.

H.E. also explained that the new import policies announced by China recently, which aim to further liberalize its markets to global imports, will open the door to huge trade partnerships in which the UAE is keen to be an active player. The UAE is extremely keen to play an important role in these partnerships, and its exports to China represent important milestones in the interest of both nations, he added.

H.E. stressed that the ‘UAE-China Joint Investment Fund’ will contribute to the UAE's economic diversification approach and also play a pivotal role in supporting development plans across sectors of mutual strategic interest, which include the traditional ones, in addition to renewable energy, infrastructure and advanced manufacturing initiatives.

H.E. emphasized that in the light of cooperation and communication in the air transport sector, with more than 100 flights a week linking UAE’s cities with most of China's major ones, the region is open to a wide range of opportunities for increasing trade, investment, tourism, cultural, scientific and technical exchanges.

H.E. explained that UAE is keen to support the success of the ‘One Belt One Road’ Chinese initiative as it falls in line with the UAE’s encouragement of this strategic project, as well as helping to underscore the importance of the UAE at the regional and global levels, being China’s gateway to the Silk Road towards the West and Africa.

H.E. stressed that the map for future cooperation between the two countries is broad and open, full of opportunities, but sectors related to innovation, technology, scientific research, advanced industries and small and medium-sized enterprises will always assume top priority. H.E. also invited companies and the business community of the friendly Republic of China to explore the opportunities and potential of the business environment in the UAE. 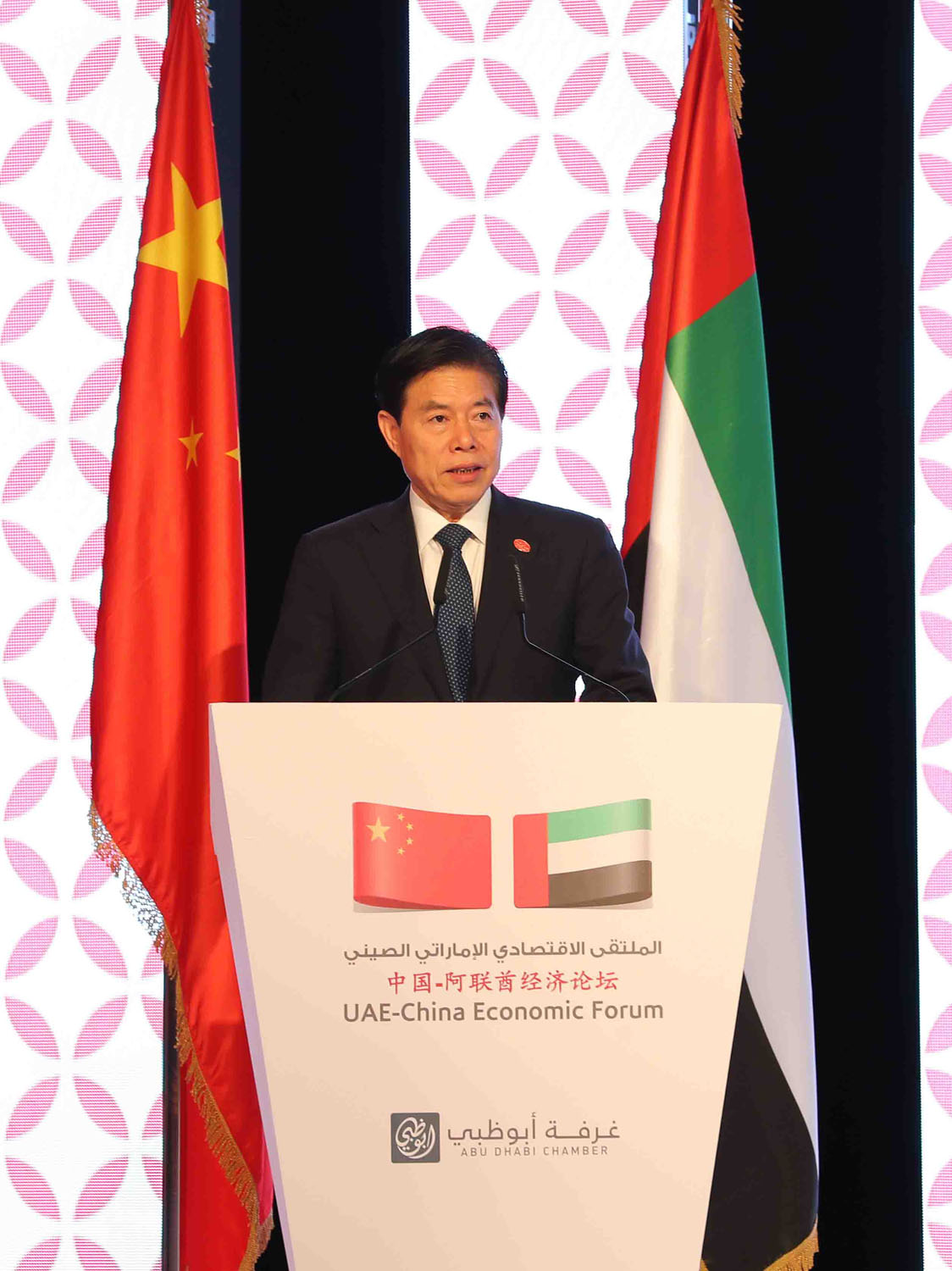 H.E. Zhong Shan, Minister of Commerce of PRC, expressed his keenness to strengthen the relationship between China and the United Arab Emirates, pointing out that the UAE is the first Gulf country to establish strategic relations with China, which has resulted in deep political mutual trust and strong bilateral high-level communications, and the interdependence of the strategies of the two countries over the years to support their development efforts.

He added that the Chinese President’s visit to UAE has contributed in promoting friendly relations between the two countries. The leaders of the two countries announced the upgrading of UAE-China relations to the level of a comprehensive strategic partnership, which will go a long way in consolidating bilateral relations and establishing the framework for economic and trade cooperation.

He stressed the importance of a consensus between China and the UAE on the issue of global free trade and an international trading system, stressing that China opposes unilateral policies and trade protectionism and continues to encourage economic openness and ensuring that the achievements of economic development extends to the international community.

The Chinese Minister of Commerce showcased the most important steps and legislations implemented by China in this regard, including the adoption of the new policy of foreign investment, which reduced several restrictions related to the share of foreign capital, as well as China's initiative to expand imports and reduce tariffs on many goods, to support trade cooperation with world markets.

H.E Omar bin Sultan Al Olama, Minister of State for Artificial Intelligence, delivered a presentation on UAE-China cooperation in the field of AI, pointing out the importance of China's achievements and its global leadership in this sector. He explained that open cooperation opportunities between the UAE and China in AI revolved around four technological tracks: Digital Vision, Autonomous Transportation, Advanced Robots, and Digital Economy.

H.E Humaid Mohammed bin Salem, Secretary-General of the Federation of UAE Chambers of Commerce and Industry delivered a speech, in which he stressed the importance of the UAE-China Economic Forum as a platform for strengthening trade ties between the private sector in the UAE and its counterpart in China, in the light of strong common interests and foundations for establishing joint ventures that serve the development process of the two countries.

During the forum, Huang Yongzhang, Chairman of the Chinese Business Council in the UAE, spoke about the comprehensive development of economic and trade relations between China and the UAE since the establishment of a strategic partnership between them in 2012, which led to tangible achievements across various fields. He pointed out that initial estimates suggest that China's actual investment in the UAE exceeded USD 3 billion in 2017.

The forum included the presentation of ‘Emirates the Land of Innovation’, which highlights the country's policy of encouraging innovation across various economic sectors and the initiatives taken by government and private institutions in this regard. Representatives from government entities involved in investment promotion in the UAE delivered presentations highlighting key opportunities for cooperation and partnership across vital economic sectors.