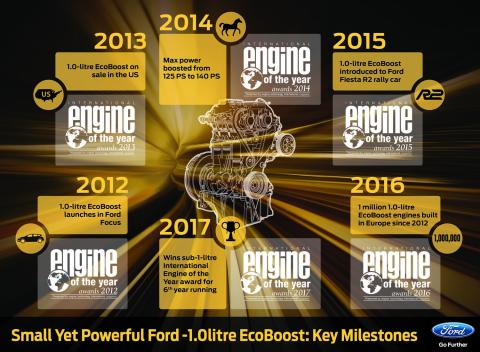 Power and fuel efficiency once sat at opposite ends of the performance spectrum but thanks to Ford’s EcoBoost range of engines, you can now spend more time on the road and less time at the fuel pump.

Ford’s award-winning EcoBoost engines power a wide range of models in the current Ford line-up, including the nimble and sporty Focus and Focus ST, muscle cars like Ford Mustang, performance vehicles like the Ford F-150 Raptor, and even Le Mans-winning racing cars, like the new Ford GT.

And it’s not just in Ford’s extreme performance vehicles that you’ll find EcoBoost technology. With up to 182-horsepower and 240 Nm torque available from its 1.5-litre EcoBoost engine, the Ford Focus delivers incredible performance from such a small engine. The 2.0-litre four-cylinder EcoBoost engine that powers the extremely popular Ford Taurus in Saudi Arabia not only produces more torque than the traditional, naturally-aspirated 3.5-litre V6, but manages to accomplish this while using less fuel. Adaptable and capable, the EcoBoost engine can be found in models across Ford’s portfolio – from the EcoSport and Focus to the all-new Expedition and the mighty F-150 Raptor.

EcoBoost V6 engines are so capable that they’re now used to replace larger displacement naturally aspirated V8 engines with more powerful, more responsive and more fuel efficient units without affecting performance at all. In fact, in most cases, EcoBoost engines outperform larger capacity naturally-aspirated engines by developing more power and torque, while also using less fuel. It’s why the new Ford F-150 Raptor is powered by a 421-horsepower EcoBoost V6 engine – that also generates 678 Nm of torque – and why Ford is introducing the engine technology to more and more of its vehicles.

The secret to the success of all EcoBoost engines is the innovative combination of three key technologies; direct fuel injection, variable camshaft timing and turbo charging – and the control of these by unique Ford software that’s designed to optimise the engine for any driving situation. Injecting precise amounts of fuel directly into the cylinders at high pressure provides ideal conditions for combustion, allowing engines to run more efficiently. Variable camshaft timing provides the perfect amount of fresh air for the combustion process, eliminating the risk of wasting fuel.

EcoBoost engines are also lighter and more compact than ever before. Ford uses strong materials such as compacted graphite iron (CGI) are used where needed, and lightweight materials like aluminium to reduce weight. That means the engines are not only robust and compact, but you don’t waste fuel carrying around more weight than you have to. Ford’s EcoBoost engine technology is so innovative that the company has secured 275 US patents and has 200 more pending – more than any other manufacturer when it comes to gasoline turbocharged direct-injection technology. EcoBoost’s accolades include the 2017 International Engine of the Year “Best Engine Under 1.0-litre” – its sixth consecutive category win.

Whether you simply need to cruise long distances or want to tap the performance potential of your Ford, EcoBoost engines make it possible.