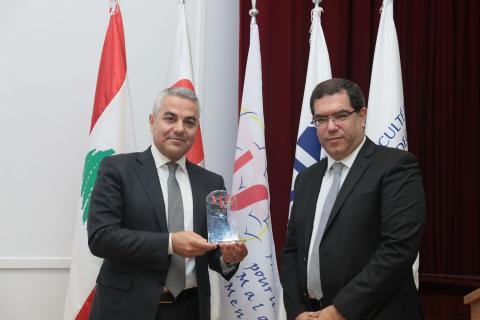 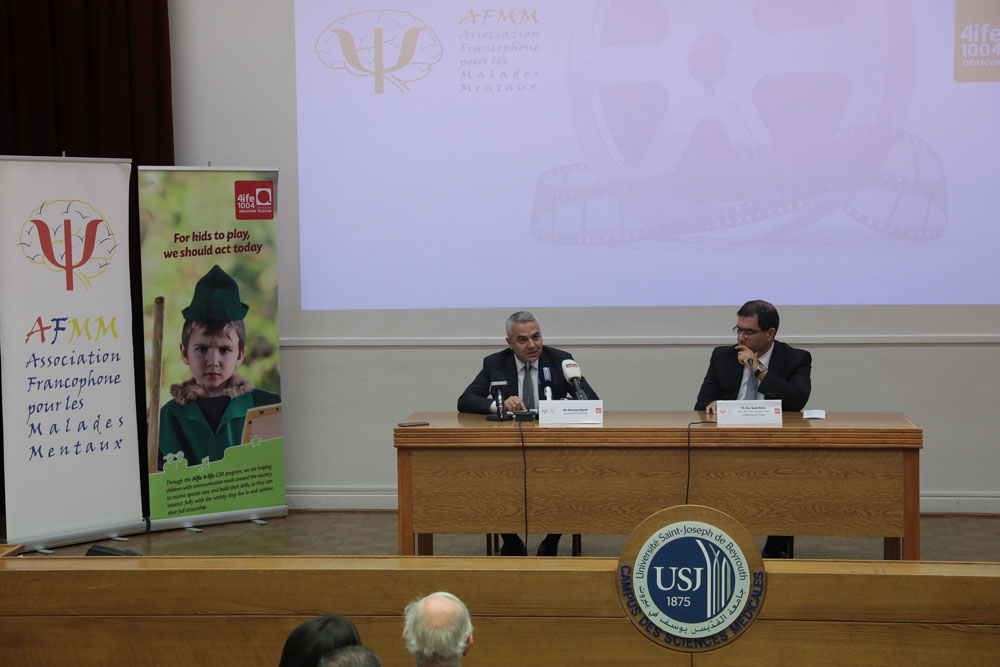 Under the auspices of His Excellency the Minister of Telecommunications Jamal Jarrah, Alfa, managed by Orascom TMT, in cooperation with the Francophone Association for Mental Illnesses (AFMM), launched an awareness initiative on mental health and the importance of integrating it in public health, as part of the Alfa 4-Life Program at a press conference held on at Saint Joseph University’s Faculty of Medicine (USJ). The event coincided with World Mental Health Day and included six awareness films produced for this campaign dealing with common mental illnesses and addressing prevention and treatment. It was attended by Alfa CEO and Chairman Marwan Hayek, AFMM President Dr. Sami Richa, USJ Vice-Rector Father Michel Scheuer, and Alfa’s management, team and interested stakeholders.

Richa Dr. Richa began his speech by stating that October 9 precedes the day that the World Health Organization dedicated to mental health. “This year, our association celebrates this international day by launching an awareness campaign supported by Alfa”.

Richa added, “Alfa helped us last year rehabilitate the psychiatric ward at Hotel Dieu Hospital with graphic arts on the walls to make it a comfortable and pleasant place. This had a very positive impact on patients and staff alike, as it created an exceptional atmosphere”. He also said, “This year, we decided to organize this campaign with the support of Alfa by launching six 30-second films on mental illnesses and the drugs we use for prevention, stressing that these are curable illnesses with biological causes rather than personality quirks that can be controlled. This socio-medical campaign aims to help people avoid the adverse consequences of untreated mental illnesses that can potentially lead to suicide or death”.

Richa thanked Alfa and its Chairman and CEO “who believed in the work of our association”. He pointed out that “this campaign will not be our last, because one of our most important goals is to destigmatize mental illness in our society and help patients afford treatment and gain access to free doctor visits, in addition to helping them find jobs in their specialty fields. We have so many ideas to implement because nearly 20 percent of the Lebanese people struggle with mental illness, which also greatly affects their families and their environment. In fact, since mental illness affects up to 20-25 percent of people worldwide, there is a need to launch awareness campaigns about mental illness and how to treat it, as in the case with heart disease, cancer and other chronic diseases”.

“We are launching this campaign from the USJ Faculty of Medicine because it is our association’s headquarters”, said Richa, before thanking the Faculty and its Dean, Professor Roland Tomb for their continuous support. He also thanked Hotel Dieu Hospital and its President, Father Joseph Nassar, as well as USJ Rector Father Salim Daccache and Vice-Rector Father Michel Scheuer, for their continued support to the association and its initiatives.

Hayek Hayek thanked the media for the constant support it offers Alfa, “especially the CSR initiatives we launch as part of our Alfa 4-Life program, through which we address many social problems, including mental illness through this cooperation with AFMM”. He pointed out that this second collaboration with the association produced six short films on the most common of the 450 mental conditions that are prevalent worldwide. Hayek added, “Mental illness is widespread, as studies have shown that one out of five people may be diagnosed with a mental condition, and this proportion is on the rise due to stress, especially due to financial burdens, which may lead to suicide in some cases”.

He said, “Some may wonder why Alfa is involved in this initiative and with AFMM. In fact, firstly, as a socially responsible company, we are especially sensitive to the plight of our society and seek to help as much as possible. We have faith in the association’s role because it has a high credibility and seeks to help people in our small society”. Secondly, said Hayek “it may surprise you to know that there is a commercial reason behind this cooperation too. Indeed, studies indicate that if employers dedicate care for the mental health of their employees, they can save a total annual global bill of $225 billion which is a result of mental illnesses. This in-depth study that began in 2003 concluded that an employee who is physically present but mentally absent (Presenteeism) causes the company a loss of $1,600/year (per employee)”.

Hayek added: “According to these studies, an employee who is absent from work accounts for 20 percent of the total loss or the total additional expenses incurred by companies for unproductive and unprofitable hours of work, while an employee who is mentally absent and physically present accounts for 80 percent of this loss. This is because this employee doesn’t perform the work as needed or does it in an erroneous manner which leads to reversed results”.

He added: “Should such loss be calculated in Alfa, a 1000-employee company, the total value of the incremental cost we could incur for unproductive and unprofitable working hours amounts to $1.6 million a year. Hence, it is significant to shed light on mental illness and diagnosis”. He stated that “an employee who suffers from a certain mental condition and is not diagnosed costs the company four times more than an employee whose mental condition was diagnosed”.

He pointed out that the role of employers is to create the appropriate environment for the staff, as this is reflected on society as a whole and the company as well, and increases productivity. He concluded by thanking all those who worked on this project, as well as USJ for hosting this event, and Ms. Rita Moukarzel, who works with Alfa throughout the year on CSR projects. Hayek promised to continue to engage in meaningful initiatives and work with AFMM to raise awareness about the need to give the needed attention to people suffering from mental illness. 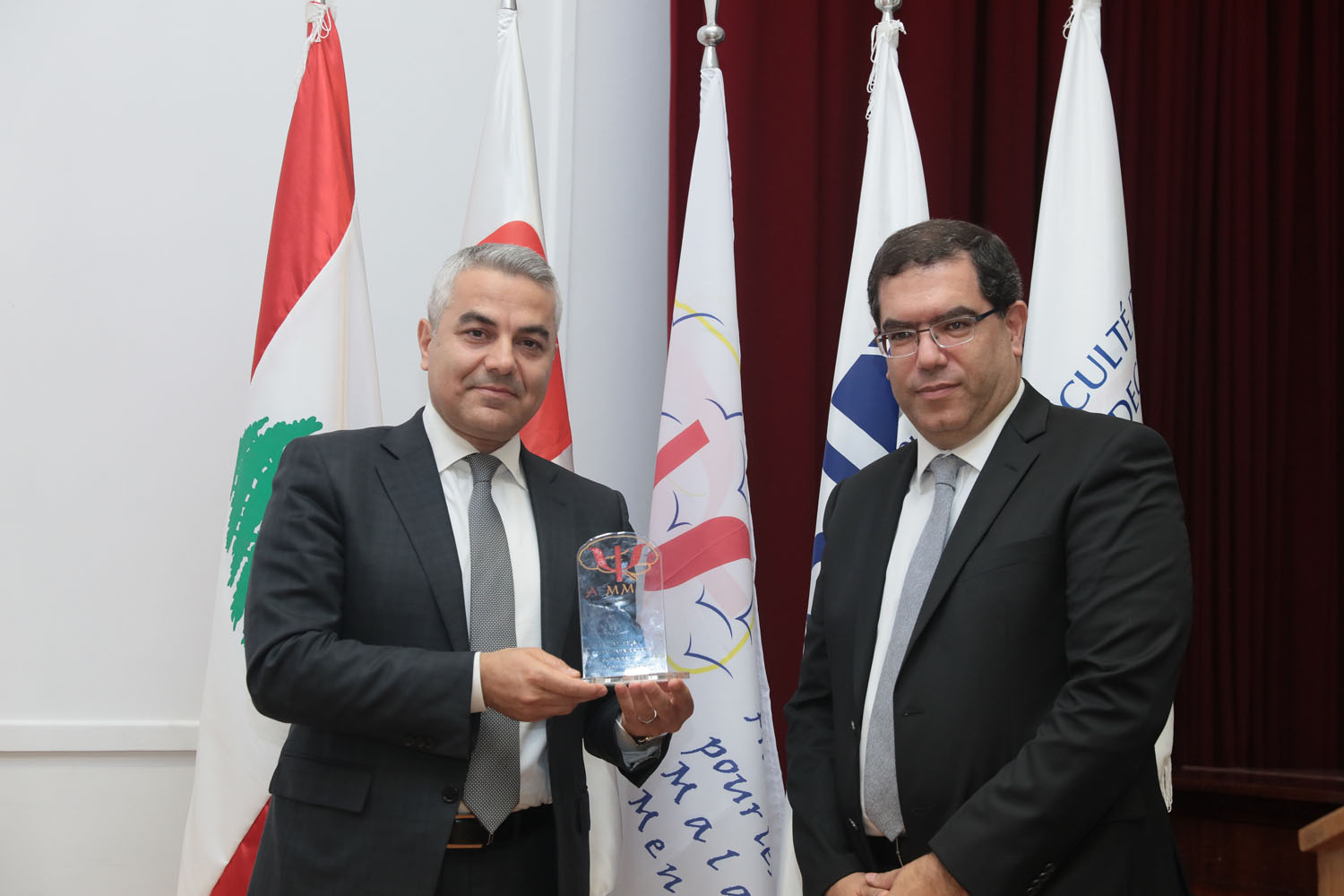 The event ended with the screening of the film Dalida, directed and written by Lisa Azuelos, which tackles depression.

It is worth noting that the six awareness movies tackled depression, schizophrenia, obsessive-compulsive disorder, bipolar disorder, anorexia and bulimia, as well as available medications and treatments. As part of this campaign, Alfa will release the movies on its social media platforms. Lectures will be conducted in universities and schools and awareness raising on the subject through various media.