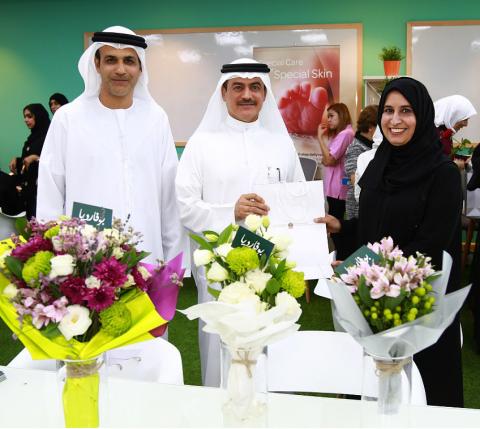 In recognition of Emirati women's contributions in the sustainable development and to appreciate and honor the active roles played by them in the nation's progress, the Ministry of Health and Prevention (MOHAP) organized a celebration of the Emirati Women's Day under the theme ‘Women on the Course of Zayed.’ The event forms part of nationwide celebrations that recognize the success and achievements of Emirati women in all fields, thanks to the constant support and encouragement from the wise leadership. The event was attended by His Excellency Abdul Rahman bin Mohammed Al Owais, the Minister of Health and Prevention; Dr. Mohammed Salim Al Olama, Undersecretary of the Ministry, in addition to a number of managers and other departmental staff. His Excellency Abdul Rahman bin Mohammed Al Owais, the Minister of Health and Prevention, lauded the achievements of Emirati women, their sincerity and efforts in accelerating the country's development and their roles as active partners in the sustainable growth of State institutions. "The celebration of Emirati Women's Day every year represents a renewed commitment towards consolidating UAE’s distinct position as a pioneering model for the empowerment of women, thereby making them influential partners in sustainable development and continuous innovation," he said.

His Excellency added that the celebration of this year’s Emirati Women’s Day holds unique significance as this is the ‘Year of Zayed.’ Thanks to the wisdom and the values upheld by the late Founding Father, which established their rightful place in the society, the Emirati women have made unprecedented achievements in all fields. This year’s theme ‘Women on the Course of Zayed’ aptly highlights their achievements and recognizes their efforts in accelerating the country's development and motivates them to continue on these paths.

Al Owais hailed Her Highness Sheikha Fatima bint Mubarak, the Chairwoman of the General Women's Union and President of the Supreme Council for Motherhood and Childhood as a pioneer of endeavors by women.  Her initiatives have contributed to empowering Emirati women and strengthening their status in the country.

Dr. Mohammed Salim Al Olama, Undersecretary of the Ministry of Health and Prevention emphasized the Ministry's keenness to promote and empower Emirati women and to strengthen their leadership roles within the Ministry and across all medical districts and departments. He added that this focus underscores the importance of roles played by Emirati women in providing comprehensive health services to the community with the highest international standards.

He further added that the Ministry has successfully created a positive working environment to support women's productivity as they are key partners in inclusive and sustainable development, in line with the legacy of Sheikh Zayed, who established the values of respect for women and accorded them their rightful place in society, an approach still followed by the wise leadership, resulting in the accomplishment of highest executive and legislative positions by Emirati women. The Ministry also organized an event at its Abu Dhabi office in the presence of H.E. Lamia Subossi, Executive Director of the Support Services sector of the Federal Transport Authority-Land & Maritime (NTA), in collaboration with Danat Al Emarat Women & Children’s Hospital in Abu Dhabi. Meanwhile, the activities of the Umm al-Quwain medical district included numerous events as well. The Department of Preventive Medicine launched three distinct initiatives. The first one titled ‘You are a jewel,’ saw the distribution of gifts and flowers and felicitation of female staff. The second initiative ‘Role Model’ reviewed the achievements of Emirati women during Sheikh Zayed's reign on a cartoon screen and featured a number of competitions about the Emirati women, while the third program ‘Gadimik Nademik’ included a trip for Emirati women employees to the Umm Al Quwain Museum to learn about the heritage of Emirati women.

The Department of Primary Health Care has also launched several initiatives, including the display of paintings and literary works. In addition, Emirati pioneers in the field of health shared their past experiences. The events also included the presentation of a documentary on the country’s first female doctor, teacher and pilot, along with the commemoration of Sheikh Zayed's statements for the UAE’s women. The activities of the Sharjah medical district on the occasion highlighted the achievements of Emirati women in various fields, with female staff in the region being honored for their efforts and perseverance in the development of society.