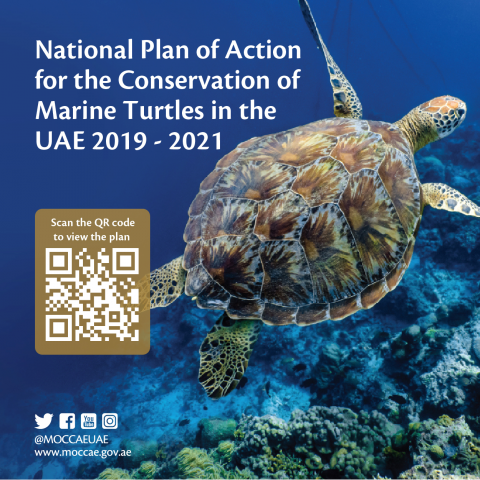 The Ministry of Climate Change and Environment (MOCCAE) has rolled out the National Plan of Action for the Conservation of Marine Turtles in the UAE 2018-2021 that seeks to protect marine turtles and their habitats in the country’s waters.

The Plan focuses on mitigating the direct and indirect causes of marine turtle mortality, and advancing the implementation of national legislations and policies for the protection and integrated management of marine turtles. Improving the understanding of marine turtle ecology and enhancing the population of marine turtles through research, monitoring, and information exchange is also part of the initiative.

Speaking on the Plan, Hiba Al Shehhi, Acting Director of the Biodiversity Department at MOCCAE, said: “The survival of marine turtles is currently threatened by habitat loss and degradation, incidental mortality in mechanized and artisanal fisheries, marine pollution, and the effects of climate change. The National Plan of Action for the Conservation of Marine Turtles in the UAE 2018-2021 regulates and expedites conservation efforts to help the species thrive well into the future.”

She added: “The UAE has designated 15 marine protected areas, spanning more than 12 percent of the country’s territorial waters. Marine turtles have found a sanctuary in these areas, which have become their regular nesting site.”

There are seven extant species of marine turtles found across the world’s oceans other than the Arctic. They all fall within different categories of the International Union for Conservation of Nature (IUCN) Red List of Threatened Species, varying from Vulnerable to Critically Endangered. Only five of these species can be found in the UAE: the hawksbill turtle, loggerhead turtle, and green turtle have settled in the UAE, while the leatherback turtle and olive ridley sea turtle are migratory species.