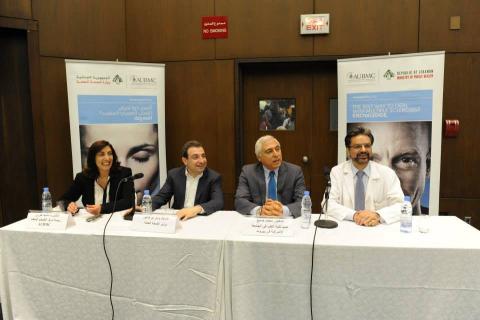 A disease that affects women twice as often as men

Friday June 6th, 2014-Beirut, Lebanon – Under the patronage and the presence of His Excellency the Minister of Public Health Mr. Wael Abu Faour, and in partnership with the Multiple Sclerosis center at the American University of Beirut Medical Center (AUBMC), phase two of the National Multiple Sclerosis awareness campaign was launched today, Thursday June 5th at Issam Fares Lecture Hall at the American University of Beirut.

The event was attended by representatives of medical institutions, hospitals, NGOs, members of the AUB Board of Trustees, Vice President of Medical Affairs and Raja N. Khuri Dean of the Faculty of Medicine at AUB Mohamed H. Sayegh, Medical center director and chief medical officer at the American University of Beirut Medical Center Dr. Adnan Tahir, Director of Abu Haidar Neuroscience Institute and Multiple Sclerosis Center at AUBMC and Associate Dean for Clinical and Translational Research Dr. Samia Khoury, Professor of clinical neurology and director of clinical research at AUB's Multiple Sclerosis Center Dr. Bassem Yamout, members of the AUB community and local media. Invitees witnessed the launch of the campaign’s TV commercial addressing both MS patients and the community at large with a positive message, that an MS patient can explore more in life with the right treatment and proper diagnosis.

“Misperception is an enemy in our everyday life, so imagine what it can do with a disease or a patient.” said Dr. Samia Khoury, Director of Abu Haidar Neuroscience Institute and Multiple Sclerosis Center at AUBMC and Associate Dean for Clinical and Translational Research. “We started our commitment to educate and raise awareness on this disease last year with the launch of phase one of the National Multiple Sclerosis campaign. Phase two is more focused and targeted on reaching the audience at large, touching them at their homes with a positive message and showing them that a normal life is possible, on condition that one get diagnosed early, takes the right treatment, and gets proper management and follow-up.” added Dr. Khoury. 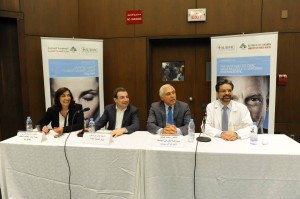 Multiple Sclerosis (MS) is an auto-immune disease where the body’s immune system attacks myelin, the protective covering of nerves in the central nervous system. MS affects women twice as often as men. While MS is not hereditary scientists believe the disease is triggered by environmental factors in a person who is genetically predisposed to respond.

There are at least 2000 cases of MS in Lebanon, although real prevalence studies are lacking. “Such data will help the MS research team in their clinical research and trials at AUBMC’s Multiple Sclerosis center, one of the fundamental challenges facing MS specialists and the development of MS treatment in Lebanon.” added Dr. Khoury. The AUBMC’s MS center is endorsed and supported by ‘Friends of MS’, a collective of volunteers rallying to raise funds for patient support and MS research. 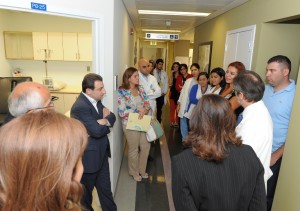 Following Dr. Khoury, VP/Dean Mohamed H. Sayegh welcomed the attendees and highlighted persuasion and determination as the keys to success in life. “Determination is reflected in our continuous efforts in achieving AUBMC’s 2020 vision milestones. We are committed to providing the best health care service and patient care in the region and in always investing in retaining the best doctors and nursing teams, and by making education and research our priority. All of this is done with our patients being the focus.” added Dean Sayegh. 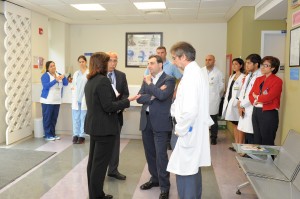 HE Minister Wael Abu Faour thanked the audience for their presence and expressed his appreciation towards the American University of Beirut Medical Center’s initiative to establish a specialized center catering for Multiple Sclerosis, which is considered to be the first and only. 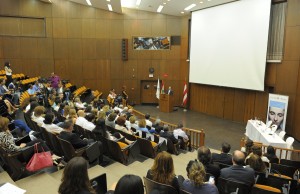 HE Minister Abu Faour commended the launch of the Multiple Sclerosis Awareness campaign to help spread awareness on the disease, which until this moment, there is lack of knowledge which is important to understand the disease its treatment and how to deal with it, to give the patient a better quality of life. According to the latest statistics in the year 2011 the Ministry recorded 700 cases in Lebanon, in 2012 they exceeded a thousand case.  This campaign along with the role of some of the associations that we’ve dealt as Minister of Social Affairs has a mission to explain this disease to the Lebanese citizens and non-Lebanese living on Lebanese territory."

Following HE Minister Wael Abu Faour’s note, Dr. Samia Khoury launched the TV commercial. The TV spot takes its viewers into the journey of an MS patient exploring life’s valuable moments from the age of one till the age of 63 and ending it with the message “With the right treatment, you can explore more in life.”

Since 1902, the American University of Beirut Medical Center has been the most trusted and respected healthcare provider in Lebanon and the region, handling more than 300,000 patient visits annually.  AUB is building on its strong foundations in medical education and health care through the AUBMC 2020 Vision. In addition to improving facilities and capacity, the AUBMC 2020 Vision will establish centers of excellence that will provide new medical options for the treatment of illnesses endemic in the Arab world, and it will expand access to the quality of care that families in Lebanon have depended on for generations.

Launched in 2010, the AUBMC 2020 Vision is an ambitious and comprehensive initiative that affirms AUBMC’s position as the leading medical center and healthcare institution in the region. The AUBMC 2020 Vision is transforming medical education, research and practice, and most importantly, medical care in the region, bringing them to new levels of excellence.  It consists of major new medical (clinical and academic) facilities, the establishment of clinical and research centers of excellence, investment in state-of-the-art equipment, recruitment of talented physicians and nurses, and regional and international partnerships. Read more at www.aubmc.org/2020