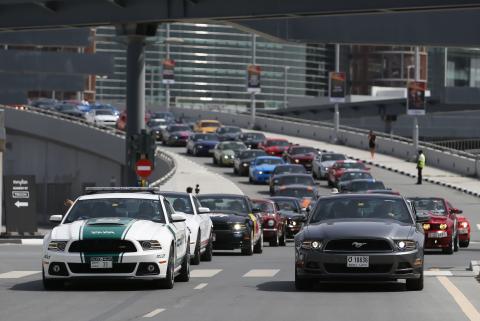 From the very start, fifty years ago, Mustang’s unique combination of style, performance and affordability established an entirely new class of sporty cars that has inspired numerous competitors. Mustang has come to evoke a variety of emotions in customers and fans – freedom, independence and being true to one’s self – just to name a few.

And to celebrate this historical milestone, over 300 Mustang owners and enthusiasts gathered to show their love for the original muscle car in an impressive parade down Dubai’s key locations, led by the famous Dubai Police Ford Mustang Roush patrol car. The parade which went through Meydan Hotel, Al Khail Road, Sheikh Zayed Road, and The Palm Jumeirah, was also attended by enthusiasts and owners from the region who came from as far as Saudi Arabia and as near as Oman to mark this milestone. The parade ended with a Mustang festival which included displays of hundreds of Mustangs ranging from classics to customised, and various activations including competitions for Best Customised and Best Restored Mustangs.

“Ford Mustang is undeniably an iconic muscle car that has its own unique following,” said Kalyana Sivagnanam, Ford Middle East & North Africa director.  “From the day it rolled out to showrooms in 1964, Mustang has captivated hearts of car lovers globally. We are thrilled to see so many fans have joined us to mark the legend’s 50th anniversary celebrations for the Middle East.” 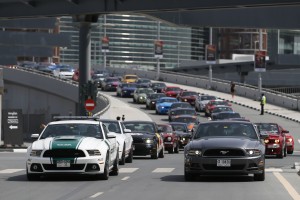 Based on the all-new 2015 Mustang GT fastback with performance pack, the 50 Year Limited Edition is designed to provide customers with outstanding performance and a unique appearance that will be instantly recognisable on the road. The only options for the 50 Year Limited Edition are the choice of two exclusive colors, Wimbledon White or Kona Blue, and a six-speed manual or automatic transmission. 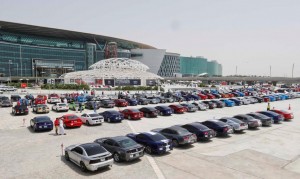 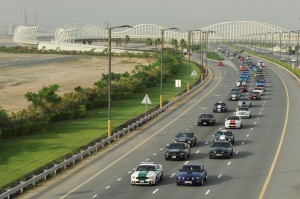 “The new Mustang blends a muscular, contemporary shape with design cues that define it as quintessentially Mustang,” said Moray Callum, Ford vice president of design. “The 50 Year Limited Edition adds details that set it apart from other Mustangs, while hearkening back to the 1965 original.” 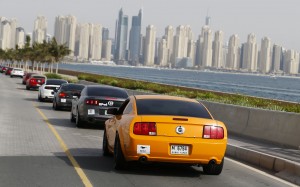 Through the past five decades, the Ford Mustang has been no stranger to envious stares and jealous looks nor has it been camera shy either. Mustang has been a star of the silver screen and the small screen for 50 years, with more than 3,200 appearances in movies and television shows, the latest of which is the widely acclaimed Need For Speed movie which saw Aaron Paul drive a customised 2014 model and featured the silver screen debut of the all-new 2015 model.

“The Mustang attitude of limitless possibilities is universal and enduring, and fans around the world are simultaneously celebrating its golden milestone. Thanks to the never-ending support of Mustang owners, specifically the Mustang Clubs and Groups that joined us from around the region, for their unwavering passion and loyalty to the ‘Stang.  The Mustang has made it to half a century and here’s looking at more exciting, adrenalin-pumping drives with the Pony car for many more years to come,” concluded Sivagnanam. 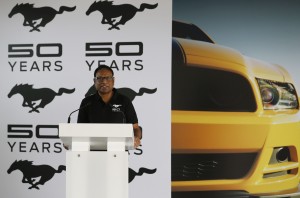 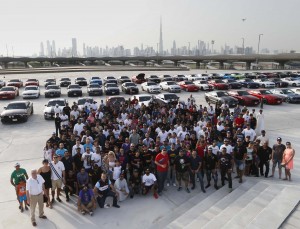