Under the auspices of H.E. the Minister of Telecommunications Boutros Harb 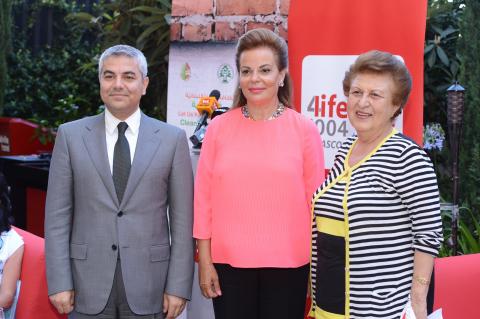 And as part of the “Alfa 4-Life” CSR Program,

the third environmental activity of Acsauvel’s youth with special needs was launched within the Ecoact initiative, calling to preserve the cleanliness of the city

Beirut – Lebanon – June 26, 2014: Under the auspices of H.E. the Minister of Telecommunications Boutros Harb represented by his wife Mrs. Marlene Harb, and as part of the “Alfa 4-Life” CSR program, the third environmental activity of Acsauvel’s youth was launched within the Ecoact initiative. This year’s activity urged to maintain the city’s cleanliness through brochures and drawings prepared by Acsauvel’s youth in specialized workshops. The activity falls in the context of achieving social integration of people with special needs.

The meeting was held at the Smallville Hotel in Badaro in the presence of Alfa CEO and Chairman, Marwan Hayek, Alfa officials, and Acsauvel director, Mrs. Nabila Fares, in addition to Alfa and Acsauvel families, and interested stakeholders. 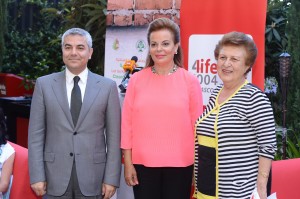 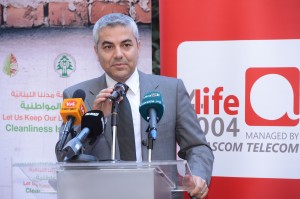 At first, Alfa CEO and Chairman, Marwan Hayek gave a speech, saying: “This activity is a continuation of the environmental initiatives that have been launched with the Acsauvel youth as part of the “Alfa 4-Life” CSR program, as they took it upon themselves three years ago to protect the environment in Lebanon. The beginning was in 2012 with the seashore clean-up campaign. In 2013, we launched with Acsauvel youth an initiative under which the association produced ecofriendly, biodegradable bags to be sold in supermarkets.” “We are gathered today to support the new environmental campaign launched and led by Acsauvel youth and which calls to keep the city clean through booklets on which they worked with enthusiasm, perseverance and commitment through specialized workshops”, he added. “Today, the youth form the nucleus of an association that is concerned about the environment, demonstrating through these environmental initiatives that they are entrepreneurs who can raise awareness on environmental issues and who can be an example for others in the community”, he stated. “It is time to consider that people with special needs are effective citizens in the community, and to believe that difference is a wealth in which we can invest to reinforce the abilities of these people, while they help the community at the same time through their abilities and potentials. This meeting is an example of how we can  achieve through collaboration and solidarity an integrated community in which every citizen plays an active and influential role”, he concluded. Hayek also thanked all those who contributed to the success of this initiative.

Acsauvel director, Mrs. Nabila Fares, said: “Thanks to their training and the special environmental club established for them, Acsauvel’s children with special needs realized the importance of the cleanliness of their roads and streets in cities, villages, on the coast and in mountains, and they became pioneers in the field of environment.” “Thanks to our cooperation with Alfa, the Acsauvel Environmental Club was established for them. For the third consecutive year, they are trying to prove to the entire nation that they are keen on loving their country and, consequently, on keeping it clean,” she continued. “Ever since its establishment, the Acsauvel Environmental Club has worked on proving its goal, as it launches today, for the third year, a new campaign to distribute special bags for cars so that no waste is thrown on the roads to ruin the beauty of the city,” she added, concluding: “Our thanks go to  the Alfa initiative and to the patronage of H.E. Minister Harb for this activity.”

President of the Graphic Designers Union in Lebanon Rita Moukarzel, who accompanied the youth throughout the workshops, said: “The first thanks goes to Alfa for supporting those with special needs, and the second thanks goes to Acsauvel and its students for their high perseverance and commitment.” “This initiative has been launched in three phases: the idea, the perception of the project, and then the pictorial and graphic identity, the Logo - Avatar, the slogan, the workshops and the booklets,” she added. “I worked side by side with the Acsauvel youth during the workshops, and they are very talented people who believe in the need to raise awareness about keeping the environment clean. This year, we launched the third booklet prepared by Acsauvel youth, which calls for not polluting our roads, our cities and our neighborhoods, and the aim is to publish a series of brochures on the environment with Acsauvel youth, with a different theme each year,” she stated. Moukarzel added: “the bags that were launched this year with Acsauvel are to be used in cars”, urging everyone to buy them in support of Acsauvel, as this helps with the social integration of Acsauvel’s youth with special needs by achieving financial returns”.

In the end, Mrs. Marlene Harb, representative of H.E. the Minister of Telecommunications Boutros Harb, gave a speech which she began by saying: “I was highly impressed by this initiative, because we learn from the children and youth of Acsauvel how to keep our city, our beach, and our nature clean.” “Today, I will call the youth of Acsauvel the ‘people of high morals’, and to be honest, people with special needs are those people who do not care about the environment and nature and ruin them, and they are the people who  throw garbage on public roads from car windows, which is annoying and upsets me a lot,” she continued, adding: “The city is our home and Lebanon is our home, and keeping it clean is being civilized. It is our duty to give complete care to the environment and its cleanliness.”

“I previously wished Alfa 4-Life program a long life, and here I am today, reiterating that wish, because what you are doing must be an example to all the major companies. With your devotion and interest in civil and social associations such as Acsauvel, and with your allocating a part of your company’s profit to this program, you contribute to society’s improvement and progress.”

Two speeches were also given by the representatives of Acsauvel youth, Dima Abou Arbid and Johnny Habib, who talked in detail about the brochures on which the youth worked and about the need to preserve the environment’s cleanliness. Moreover, this gathering showcased the paintings of the Acsauvel youth, in which they expressed their love of nature and through which they called for keeping the city clean.

Alfa is the first Lebanese mobile network owned by the Republic of Lebanon and managed by Orascom Telecom, Media and Technology (OTMT). Alfa capitalizes on the vast know-how and international expertise of OTMT in order to deliver quality and professional solutions for the mobile sector in Lebanon. On October 25, 2011, Alfa was the first mobile operator to launch 3G+ mobile broadband services in Lebanon. In a new technological achievement, Alfa has become the first operator that launches 4G-LTE commercially in Lebanon on May 15, 2013. Alfa currently serves 2 million subscribers and its network covers 99% of Lebanon. For more information, please visit: www.alfa.com.lb

About Orascom Telecom Media and Technology

OTMT is a holding company that has investments in companies with operations mainly in Egypt, North Korea, Pakistan, Lebanon and other North African and Middle-Eastern countries. The activities of OTMT are mainly divided into its GSM, media and technology and cable businesses. The GSM activities include mobile telecommunications operations in Egypt, North Korea and Lebanon. The media and technology division consists of OT Ventures/Intouch Communications Service and the OT Ventures Internet portals and other ventures in Egypt, including LINK Development, ARPU+ and LINKonLINE. The cable business focuses on the management of cable network