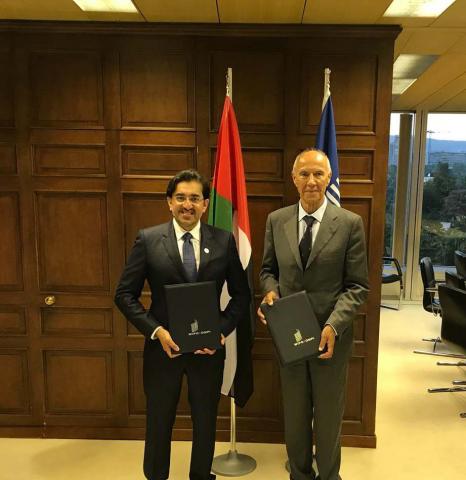 Memorandum of Understanding signed in Geneva during Emirati Day celebration The UAE has signed a Memorandum of Understanding with the World Intellectual Property Organization (WIPO) establishing Fund-In-Trust which will promote activities of the intellectual property rights (IPR) in developing countries and least developed countries. The UAE Ministry of Economy (MOE) signed the MoU during Emirati Day held at the WIPO headquarters and organized by MOE in cooperation with WIPO on the sidelines of Assemblies of the Member States of WIPO Fifty-Eighth Series of Meetings in Geneva, Switzerland.

H.E Eng. Mohammed Bin Abdul Aziz Al Shehhi, Undersecretary of Economic Affairs at MOE and Francis Gurry, Director General of WIPO signed the MoU in the presence of H.E. Mr. Obaid Salem Saeed Al Zaabi, Ambassador and Permanent Representative of United Nations and the other international organizations in Geneva, and a number of senior officials.

The UAE is the first Arab nation to support execution of the development goals for developing and least developed countries and the Sustainable Development Goals (SDGs) in particular SDG9 through Fund-In-Trust. The fund places priority on financing the role of the sector in the promotion of economic and commercial activities which advances intellectual property’s (IP’s) role in technological development, creative industries, small and medium sized enterprises (SMEs), training and education.

H.E Eng. Mohammed Bin Abdul Aziz Al Shehhi said that the UAE since its inception has adopted a modern approach based on the openness, transparency to promote innovative and pioneering ideas while ensuring that the diversity of cultures is respected and valued, making the country among the largest Arab economies and one of the most important global trade centers.

H.E Al Shehhi noted in his speech during the Emirati Day that the UAE will continue to follow a development path towards economic diversity, driven by a knowledge- and innovation- based economy, including the development of an integrated system for the protection of intellectual property rights as one of the fundamental pillars for achieving these strategies and objectives.

He further added the MoU between MOE and WIPO, which will see the establishment of a UAE Fund-In-Trust (FIT/UAE) for IP, aims to support implementation of the WIPO Development Agenda and its related activities in least developing countries and developing countries, which is in line with the country's leading regional position in serving and supporting the UN-led Sustainable Development Goals (SDGs).

Francis Gurry, Director General of WIPO said that the UAE has reached remarkable achievements in terms of enhancing its competitiveness and capabilities in protecting and enhancing the IP rights, adding that the UAE is one of the most active countries in WIPO, especially in the last ten years, having signed several treaties and conventions of WIPO, especially in areas such as women empowerment in the IP sector, green technology, creative industries and other fields that serve the SDGs.

WIPO hosted in its headquarters in Geneva the ‘Emirati Day’ event jointly organized by the MOE and WIPO on the sidelines of the Ministry's participation with a high-level delegation at 58th WIPO's Assemblies of the Member States Meetings in Geneva from 24 September to 2 October.

The event was inaugurated by H.E Al Shehhi and Gurry in the presence of H.E Al Zaabi, government delegates, senior WIPO officials, representatives of Member States and selected ambassadors and delegates of foreign missions.