TO THE STARS WITH THE LITTLE PRINCE 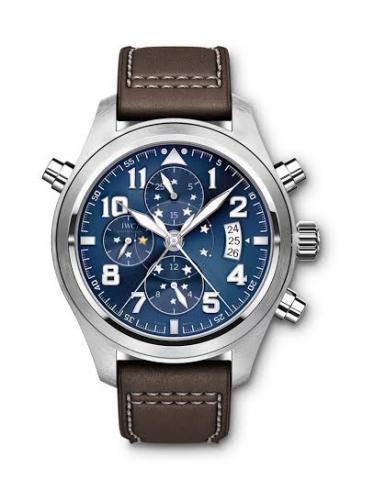 IWC Schaffhausen sends the new Pilot’s Watch Double Chronograph Edition “Le Petit Prince”, complete with an innovative jumping star display for the day of the week, off on a journey. Every day, one of seven stars in the inner circle of the dial lights up in gold to symbolize the visit of Antoine de Saint-Exupéry’s little prince to a different planet. The same seven stars are also engraved as a decoration on the back of the watch and include the name of the inhabitant with whom the little prince is currently passing the time. 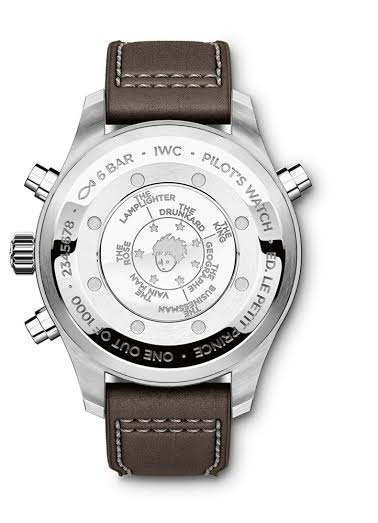 A king who rules over a fictitious realm, a businessman who believes he owns the stars, a geographer who never leaves his desk: having abandoned his own tiny asteroid in search of a friend, the little prince meets various inhabitants of other planets who lead strange lives. IWC Schaffhausen has taken this journey through the universe from Antoine de Saint-Exupérys “The Little Prince” as a reason to crown the new Pilot’s Watch Double Chronograph Edition “Le Petit Prince” (Ref. IW371807) with an enchanting mechanism. “Our partnership with the Antoine de Saint-Exupéry Youth Foundation has already inspired us to create many Pilot’s Watch special editions,” says Georges Kern, CEO of IWC Schaffhausen. “And since the tale of ‘The Little Prince’ celebrated its 70th birthday two years ago, we’ve also dedicated a number of models to the title figure. This latest version not only has an impressive split-seconds mechanism but also a rather whimsical star element that might not be noticed at first glance.”

The midnight blue dial with its characteristic cockpit design has a surprising feature: a jumping star display is arranged inside the faint line of the circle at its centre. Each day of the week, this captivating day display lights up a different star in glittering gold. However, the change does not take place in any particular order: the gleaming golden star appears to jump at random between the seven different positions on the dial. The stars punched out on the dial symbolize the planets visited by the little prince. They are also engraved in the same order on the back of the watch, together with the name of their inhabitants: the king, the vain man, the drunkard, the businessman, the lamplighter, the geographer and finally the rose. The little prince cannot forget the latter and returns to her at the end of his odyssey. We also find a playful indication of where the little boy with the wheaten hair happens to be at the moment, as well as a portrait of the prince himself, on the reverse side of the case. Incidentally, the owner of the watch decides which star on the dial is illuminated on which day of the week by using the crown to make the golden star jump to another position.

The sophisticated chronograph split-seconds hand  complication is now licensed to fly in the Pilot’s Watch special edition “Le Petit Prince”. Also known as a double chronograph, this mechanism presents watchmakers with a challenge that is often underestimated. It has two stopwatch seconds hands mounted one on top of the other which allow the owner to reliably record intermediate times, even within the same minute. The Pilot’s Watch Double Chronograph Edition “Le Petit Prince” is a fascinating variant that combines all the features of a watch designed for flying with an additional poetic element. Its functions include automatic winding, the time of day, date, weekday in the form of a jumping star display, small hacking seconds, chronograph with aggregate time recording up to 12 hours, split-seconds function, sapphire glass with antireflective coating on both sides which is secured against drops in pressure, as well as the soft-iron inner case found in IWC’s Pilot’s Watches as protection against magnetic fields. The midnight blue dial underscores the watch’s sporty yet elegant character while the Super-LumiNova®* coating on the hands and appliqués guarantees excellent legibility, even in the dark. The engraving on the case back makes it clear that only 1,000 examples of the watch will be made. The Pilot’s Watch Double Chronograph Edition “Le Petit Prince” is supplied with a matte brown calfskin strap with decorative beige stitching.

IWC AND THE LITTLE PRINCE

The library was made possible by the proceeds of an auction of a Pilot’s Watch Chronograph Edition “The Last Flight” in platinum (Ref. IW388005), with which IWC honoured the great writer’s last flight.

With a clear focus on technology and development, the Swiss watch manufacturer IWC Schaffhausen has been producing timepieces of lasting value since 1868. The com pany has gained an international reputation based on a passion for innovative solutions and technical ingenuity. One of the world’s leading brands in the luxury watch segment, IWC crafts masterpieces of haute horlogerie at their finest, combining precision engineering with exclusive design. As an ecologically and socially responsible company, IWC is committed to sustainable production, supports institutions around the globe in their work with children and young people, and maintains partnerships with organizations dedicated to climate and environmental protection.