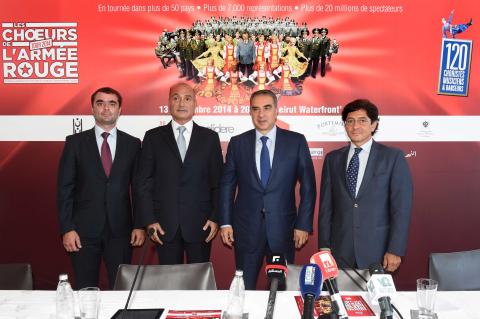 With the support of his Excellency Minister of tourism Michel Pharaon, and in cooperation with the Russian Federation embassy and Solidere, We Group proudly presents an exceptional family performance by The Red Army Choir in a live concert taking place on the 13th of September 2014 at the Beirut Waterfront at 8:00 PM.

In order to comprehend the strong and deep uplifting voices of the Red Army choir, one must go back to the Russian History that cannot be detached from that of the group. These choirs have been designed to serve and support their country Russia and supplement the worn-out forces and uplift their morale. This band of men, all of which were fighting soldiers, had a vital role in the Army, in which they were supposed to glorify the ideal example of the communist revolution. Hence, they encouraged all individuals to relive the spirit of October’s rebellion and commemorate the raid of the Winter Palace.  Those men ought to be the voices of the Revolution, the Modern Soviet Union and the voice of the Soviets. 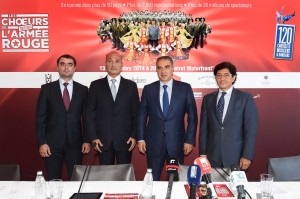 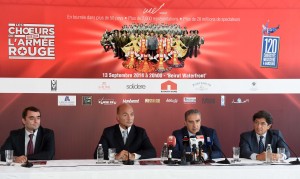 This spirit was intuitive in the people that suffered repeatedly in the era of the Russian Tsars. This nation was known that it had undergone wars, revolutions, starvation and political indoctrination. However, the people always resisted and never gave up until they raised and triumphed over invaders and barbarians.

Although, this choir had a vital role in presenting political aspects of Russia, but they also come from an open nation that has a superior level of cultural sophistication and passion for art and literature.  The people that this group originated from, has been solid and bold because their origin was entrenched in the toughest places to live on earth.

There can be no groups in line with the concrete Red Army Choir. Thus, the band must be outstanding because it’s mirroring the Russian spirit as it glorifies the country’s essence and radiates in it: the essence of courage and warmth, a spirit reflecting faith in life and hope.

The Red Army Choir performed more than 7000 shows in several languages and to more than 20 million viewers, over the past thirty years!

Under the control of the charismatic leader of the choir, who is most capable to lead a military band, Gen. Victor Eliseev the band went to more than 50 countries and in the most prominent places like China, Japan, Korea, Australia, Germany and France.

The Red Army Choir is also eminent for being the only chorus who achieved the “Platinum Star” award engraved in the alley dedicated to Great Russian artists. The academy included more than 400 artists (musicians, singers and dancers), and fifty of the band members received the top title “Russia’s artist” (equivalent to the title of Knight of the art and literature and the order of the Legion of Honor in France created by Napoleon)

To add further accomplishments to the band, the choir participates every year in the solemn procession on the 9th of May in the celebrations of WWII Victory day in Russia.  In 2010, 2011 and 2012, the band performed in France around 200 shows of the most extraordinary shows, where an audience of 21,000 spectators came on single show to watch the Choir’s performance by Enghien Lake! Eliseev’s Choir also concurs all continents after advancing and revisited its repertoire. This advancement allowed the choir to reach a wider audience including people in France. The Red Army choir also had participated in around 20 Television shows during peak time. For their new project “Red Opera” the Red Army Chior produced three video clips that accomplished until now Triple Disque in France and Double Disque D’Or in Germany!

Supervised by Major General Eliseev Victor, The Red Army Choir also opened the Winter Olympic Games in Sochi last February, and received Platinum awards in France and Germany last year. The Choir also worked with artists like Celine Dion, Vincent Michaela, Helen Fisher, Michel Sardou, Mireille Mathieu, and others. In addition to working with international artists, the band recorded their version of the record breaking song Get Lucky by Daft Punk. The band finally got featured in famous Television shows like mondivision on NBC, and has established partnerships with channel TF1, Starwatch and other media all over the world.

The Red Army Choir is considered under the Russian interior ministry. Some Ukrainian and Belarusian forces (which were previously called "members of the Red Army or the army of former Russian") have tried to use the band’s reputation in France or in other countries to present shows with some artists. Yet, those forces weren’t capable of giving the same standards as The Red Army Choir and succeeded only in bad imitation. The audience is well aware of such acts and can only recognize General Eliseev’s band as a reference for the Red Army Choirs.

After performing recently in Azerbaijan, Russia, Kazakhstan, and White Russia, Armenia and Tunisia Red Army Choir will perform soon in Poland, England, Bulgaria and Germany till the end of 2015. The concerts will include different show in the legendary Olympia Hall in the Palais Des sports. The band accordingly performs various shows on stage around 300 days per year.

Red Army Choir Stays a symbol spread all over the world contributing in the entertainment of generation of fans.

Tickets are sold at Virgin Ticketing, with prices starting from $ 60.