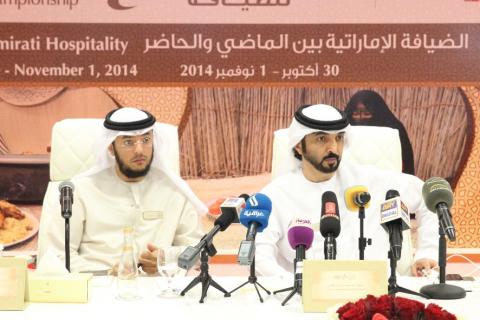 [UAE, 28 October, 2014] - Under the auspices of H. H. Sheikh Hamdan Bin Mohammad Bin Rashid Al Maktoum, Crown Prince of Dubai, the Dubai World Hospitality Championship is all set to kick off tomorrow 2014 at the Sheikh Saeed Halls of the Dubai World Trade Center, amidst an ambience of enthusiasm and excitement during the championship’s five competitions, including International Competition, Emirati Competition, Gulf Products Competition, Hospitality Sector Competition, and Gulf Exhibition. The five competitions will highlight the best creations from local and international cuisine. DWHC, which will be held from October 30 to November 1, is organized by Za’abeel Palace Hospitality in cooperation with the Government of Dubai and The Emirates Culinary Guild (ECG). 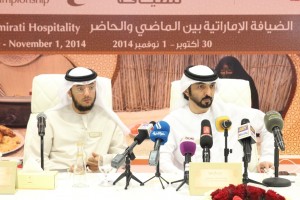 H. E. Ahmed bin Hareb, President of DWHC, said: “Za’abeel Palace Hospitality finished its preparations to launch the Dubai World Hospitality Championship, as it met up with the participants to provide them with detailed information about the requirements of security and safety, and also prepared the layout of the tournament halls.”

“The championship features a wide range of activities which showcase the contestants’ skills in decorating foods skills, highlight the local home-made products and explore the promising talents in hospitality and culinary. The Live cooking shows by professional chefs will be one of the top highlights of the championship, as they will brief the visitors on the various methods of traditional, Arabic and International cooking. The 2nd cycle of the championship will be of a great success as it attracts 2588 chef participants from the GCC and Arab countries”, Bin Hareb concluded.

The 2nd cycle of DWHC will facilitate the exchange of experiences and knowledge in hospitality and culinary. The visitors will get the opportunity to enjoy a series of Emirati folk shows and cultural activities.

Ahmed Sharif, Vice President of DWHC, said: “The International Competition is one of the main highlights of the 2nd cycle of DWHC. It attracts wide participation from the GCC and Arab countries, as it features a wide range of hospitality and culinary contests and activities. The competition will highlight the rich culture and authentic heritage of the GCC and the UAE. The event aims at spreading knowledge of UAE’s culinary traditions and Gulf hospitality and maintaining and passing them on to the next generations. During the competition, the visitors will enjoy a range of live cooking shows and contests between professional and amateur chefs to prepare delicious Emirati and international dishes. The championship will feature contests such as food creations, in addition to the main competitions including Gulf Products Competition and Hospitality Sector Competition among others.”

Ahmed Sharif pointed out that DWHC plays a vital role in maintaining the rich heritage and traditional culinary arts and promoting handmade products, while keeping pace with the requirements of modern life. He added that the championship sheds light on the authenticity of the UAE’s heritage and culture and the warm hospitality of its people. It also helps to exchange knowledge on Emirati cuisine and highlight its elements and features, in addition to provide a platform to promote communications between the cultures of the world based on modern and effective methods.

Sharif added: “While the DWHC organizing committee is confident that the participants will show a strong performance during the competitions, it intensified its efforts to enhance their skills and provide them with knowledge and methods that will ensure that all participating products conform to the highest standards of professionalism, quality and accuracy. The championship is a global platform that aims at highlighting the top Emirati young talents and showcasing their achievements and creation in hospitality and culinary arts.”

Ahmad Al Falasi, Executive Director, Property Management at Emaar Properties, said: "Emaar is well prepared to support an event at this high level of professionalism, excellence and exclusivity, which celebrates the Emirati hospitality and traditions which is an integral part of the Emirati cultural and heritage."

For his part, Abdul Baset Al Janahi, CEO of Mohammed Bin Rashid Establishment for SME Development, said: "The establishment is keen to provide necessary care and support to continue the success achieved last year by Dubai World Hospitality Championship; hoping this year the championship will achieve positive results. The activities of DWHC 2014 will contribute to the exchange of experiences and varied cuisines, bringing a series of folk and traditional Emirati performances to the audience."

Commenting on the Emirati Competition, Amna Al Dhaheri, Emirati Competition Manager, said: “The Emirati Competition consists of 4 categories, including "Traditional cooking", "Professional", ‘Amateur’ and ‘Kids’. The ‘Traditional Cooking’ will shed light on the rich traditions of the Emirati society and traditional cuisine. The competition will be held outdoors in a model heritage village. The contestants in the ‘Professional’ category will have the opportunity to showcase their experiences and creative skills in preparing a wide range of appetizers, main courses and sweets. The Amateur category is for males and females between the ages of 15-27 years old and Kids category between the ages of 7-14 years old from Dubai. Under ‘Kids’ category, the competitors will have to prepare sandwiches, decorate cakes and biscuits, and creatively arrange the dining table. The participation in this category will be open to the kids who are present in the DWHC venue if they are willing to. The DWHC organized a special workshop to qualify the kids’ participants for the competition.”

The second cycle of DWHC will occupy 25,000 square meters of prime space and four halls of Dubai World Trade Centre, namely Sheikh Saeed Hall 1, 2 and 3, and the Arena Hall which has the capacity to welcome 10,000 visitors a day. 13 kitchens have been set up for the Emirati Competition, 9 kitchens for the Hospitality Sector and another 4 International Competitions. There will be one key theater, with a capacity of about 2,500 people. Each hall has studios for television and radio channels. Aside from the 400 stands allocated for exhibitors from the UAE and the Gulf States, 64 stands for hospitality exhibition featuring the commercial sector and local and global trade companies will be set up.

Under the directives of His Highness Sheikh Hamdan bin Mohamed bin Rashed Al Maktoum, Crown Prince of Dubai, Za’abeel Palace Hospitality organizes the Dubai World Hospitality Championship 2014, an initiative that seeks to spotlight Dubai amongst the finest multicultural culinary destinations of the world.

Supported by the World Association of Chefs Societies (WACS), the Emirates Culinary Guild (ECG) and Dubai World Trade Centre, as well as the support of the strategic partners "Emaar Properties" and "SME", the diamond partners "Dubai Mall" and "At the Top Burj Khalifa", the Official Airline Carrier

"Fly Dubai", the Official Media partners "Dubai Press Club" and "DMI" and the Official Hospitality partner "The Meydan Hotel", in addition to CPI, DIWA and Dubai World Trade Center. The debut edition of the championship will host a culinary museum and a model heritage village displaying traditional handmade products and offering popular Emirati food for sampling. The event will offer free access to the public.