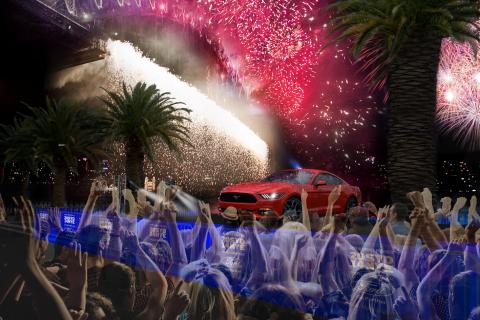 The City of Sydney today announced Ford as an associate partner for this year’s Sydney New Year’s Eve. This completes a history-making year in which sat atop the Empire State Building in April – re-creating the original Mustang’s debut 50 years ago – and scaled the Burj Khalifa, the world’s current tallest building in November. 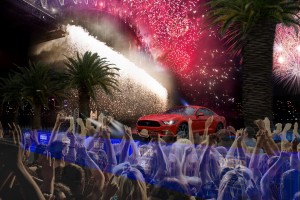 To enhance the day-long event, Ford will bring music entertainment for the first time ever to the crowds at key Sydney Harbour vantage points. And, Mustang will make a surprise appearance to cap a big year.

“We are sending a message that Ford has an exciting future in Australia with a great line-up of new vehicles, including the re-introduction of Mustang, which is going global after 50 years as America’s greatest motoring icon,” said Bob Graziano, Ford of Australia President and CEO.

“We could not take the all-new Mustang any higher, so now we will give the world a view never seen from a car of Sydney’s spectacular New Year’s Eve fireworks.”

Scheduled to officially join the brand’s Australian line-up in late 2015, the Ford Mustang will be displayed to the public for the first time on 31 December as part of Sydney New Year’s Eve, which will be attended by 1.6 million people and viewed by more than a billion globally.

Taking pride of place at a Mustang concert stage under harbour-side, this marks the first time a car has been this close to the Sydney Harbour Bridge, which offers views of the evening’s fireworks, including incredible placement for the Midnight Fireworks Display’s ‘waterfall’ fireworks. Ford is introducing a wave of new products that will accelerate next year as the company plans to refresh its entire line-up by 2017. In addition to the new Mustang, the new vehicles include:

“The theme for  2014 Sydney New Year’s Eve is ‘Inspire,’ which is a perfect fit for the future of our brand – especially with the arrival of Mustang as people see the car as a way to explore their dreams and the freedom of the open road,” said Graziano.

“Sydney is one of the first major city to ring in the New Year so we want to help the city make the event even more memorable.”

Ford will bring the soundtrack for the evening to life, hosting a number of Aussie music favourites and broadcasting music to tens of thousands of people around Sydney Harbour.

“People show up early and wait all day for the fireworks displays,” said Graziano. “We are bringing the first-ever soundtrack to help people enjoy the day even more. It’s also a chance to celebrate Ford’s exciting future in Australia with a great line-up of new vehicles, including the re-introduction of Mustang, which is going global after 50 years as America’s greatest motoring icon” said Graziano.

Ford is also giving Aussies the chance to enter to win tickets to the exclusive event[1]. From tomorrow, fans are invited to head to the Ford Australia Facebook page (www.facebook.coom/FordAustralia) and share their most adventurous New Year’s resolutions by uploading a photo on Facebook, Instagram or Twitter using the hashtag #FordNYE to win. [2]

Three winners will receive flights, accommodation, and exclusive tickets for themselves and three friends at the coveted location, one of the best vantage spots to watch Sydney’s New Year’s Eve. In addition, one grand prize winner will also win the chance to help make his or her adventurous resolution come true. Entries close December 18.

Australians are also encouraged to follow all the action from the evening by following #FordNYE and #SydNYE.

The all-new Ford Mustang is the most advanced version yet of the iconic pony car, offering more advanced driver-assist technology than any other car in its class. The sleek new design of Mustang fastback and convertible is backed up by world-class performance from a range of available engines, including a new turbocharged EcoBoost® 2.3-liter and an upgraded 5.0-litre V8 with more than 420 horsepower. In addition to state-of-the-art connectivity systems, Mustang features available track apps, launch control and more.

Ford Mustang was revealed to the world with a television advertising campaign on the evening of April 16, 1964, before being shown to the public at the New York World’s Fair on April 17. The car officially went on sale that day, and Ford dealers accumulated a record 22,000 sales and orders that first day on the way to more than 418,000 sales in the first year and 1 million sales in less than two years. In the past five decades, more than 9 million Mustangs have been sold.

Ford Motor Company, a global automotive industry leader based in Dearborn, Mich., manufactures or distributes automobiles across six continents. With about 186,000 employees and 65 plants worldwide, the company’s automotive brands include Ford and Lincoln. The company provides financial services through Ford Motor Credit Company. For more information about Ford and its products worldwide please visit www.corporate.ford.com.