Launching of the 11th edition of JABAL 2015: Myths and dreams are all about Lebanon 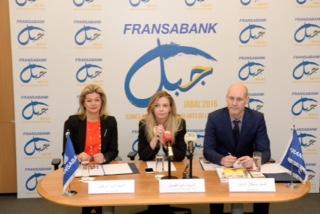 Beirut, Tuesday March 3rd, 2015 – A press conference was held this morning at the Fransabank premises in Bab Idriss - Beirut Central District to present the 11th edition of JABAL (Jeunes Artistes des Beaux-Arts du Liban) under the patronage of Mrs. Lama Tammam Salam. JABAL will be held from the 14thtill the 16th of May 2015 and, for the first time, at the Saint-George hotel. Dania Kassar, Head of Marketing and Corporate Communication Department, Laure d’Hautevilleand Pascal Odille, Artistic directors of JABAL, spoke at the conference. 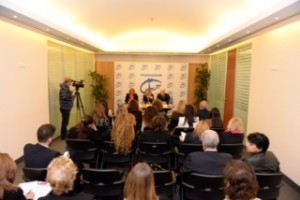 JABAL has become a must-visit destination for amateurs, professionals, and artists of all ages; it remains faithful to its original vocation: bring together, at each edition, dozens of painters, sculptors, photographers, installation artists and designers, well known among their peers but who have not yet had the chance to present their works in a solo exhibition and bring out to the public, the potential of these young artists. 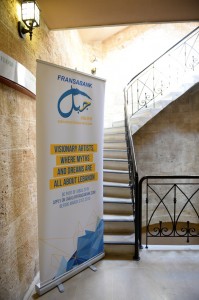 For the 11th edition of JABAL, artists will be asked to present their artworks under the theme«Visionary Artists, where myths and dreams are all about Lebanon ». The artist has always been the witness to our society’s evolution.He is inspired not only by his surroundings, but also by his own history in order to give us a personal perspective of past and future events.Beyond the role of witness, the artist also creates the trends.   During her speech, Dania Kassar said «H.E Mr. Adnan Kassar, President of Fransabank Group,has always believed in the potential of our youth and we always had the will to keep them in their homeland and country so they can extract from its roots and, in return, breathe into the public their dynamism and strength. We have always been visionaries and pioneers through this initiative.With JABAL, our vision held true. Since the firstedition of JABAL in1998, Lebanon has regained its role as the region’s artistic hub and we noticed that galleries, exhibitions, foundations, and museums are emerging and flourishing». She added, «By organizing JABAL 2015 at the Saint-George Hotel, we expect artists to reclaim this place and lead us into their visions, where myths and dreams unite around our capital and are all about our country».   Laure d’Hauteville has insisted on the fact that: “JABAL is an exhibition focused on the future and it invests in youth creation, far from any stereotyped concept.Hope and confidence are vital assets to exist and develop inspiration, which will allow themto be well known”.   Pascal Odillehas developed the chosen theme for this year highlighting that: «The visionary artist is opposed to a simple representation of reality tied to the unique mastery of techniques.He uses his intuition and sensitivity to channel his daydreams. The contemporary artist can express himself through several mediums, whether paper, canvas, clay, bronze, photography, or through computer programs.He has the ability to amaze his public, and take him to a constructive world».   How to participate in JABAL 2015?  To receive an application form, the artist shall email Ms. Marine Bougaran, on the following address: jabal@fransabank.com Application Deadline: March 31, 2015 Beyond this date, applications will not be accepted. About JABAL Created in 1998, JABAL (Jeunes Artistes des Beaux-Arts du Liban), is a Fransabank initiative. It aims to enable young Lebanese artists to introduce their work to the public and to network with art professionals and the media. In each edition, the exhibition brings together painters, sculptors, photographers, installation artists and designers, well known among their peers but who have not yet had the chance to present their works in a solo exhibition. JABAL’s objective is to bring out to the public, through an annual exhibition, the potential of these young artists who are selected by professionals. JABAL has become a must-visit destination for amateurs, professionals, and artists of all ages.www.fransabank.com