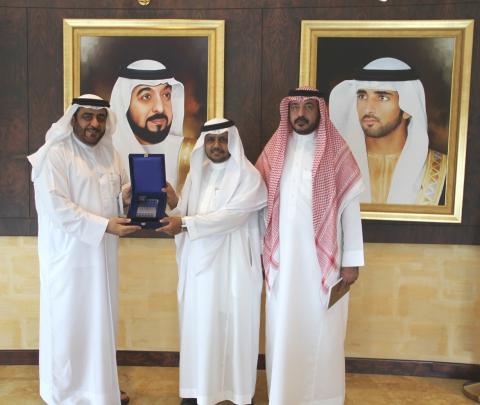 UAE, July 21, 2014 – Dr. Mansoor Al Awar, Chancellor, Hamdan Bin Mohammed Smart University (HBMSU), recently received Dr. Saleh Bin Hamad Al-Suhaibani, Saudi Cultural Attaché in the UAE, and accompanying delegation to explore the prospects of cooperation in the field of science, technology and research with leading Saudi-based universities. In addition, the delegation also discussed the opportunities for academic and learner exchange programs between both parties. The meeting was part of the ongoing effort to encourage the transfer of knowledge and promotion of cultural innovation and excellence in the Arab World.

During the meeting, the delegates were introduced to HMBSU’s achievement as the first institution in the Arab region to adopt the concept of Smart Learning. Dr. Al Awar gave a detailed explanation about the university’s vision to enrich knowledge and consolidate the culture of creativity, innovation and scientific research through Smart Learning. He also shed light on the university’s accredited training and academic programs as well as about its integrated learning environment that responds effectively to the ongoing industry changes and technological breakthroughs, considered a key feature of the 21st century. 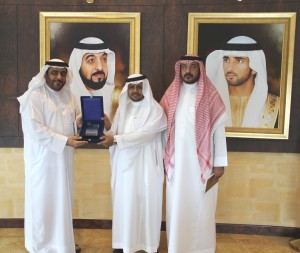 The delegation also toured the university’s academic facilities, where they were briefed about the virtual classes and the curriculum adopted by HBMSU. They received a detailed insight about the university’s virtual learning environment that is aimed at promoting lifelong learning and providing education to everyone in line with the highest standards of efficiency and excellence.

Dr. Al Awar further talked about “Cloud Campus” the social online learning initiative, which continues to gain particular importance as the first-of-its-kind in the Middle East based on an innovative concept. Cloud Campus aims at providing high quality, cost-efficient e-Learning services via social media, which is widely popular among all social segments of the region. The initiative enables learners from different age groups to directly access high-level learning material to meet their future aspirations.

Dr. Al Awar explained that HBMSU is keen on expanding its wide network of strategic partnerships with the world’s leading universities and academic and research institutions. He further expressed his delight on receiving Dr. Saleh Bin Hamad Al-Suhaibani and the accompanying delegation and look forward to cooperation with Saudi universities for exchange of faculty members and learners to address common aspirations of raising the bar on the quality of education in line with the best international practices.

For his part, Dr. Saleh Bin Hamad Al-Suhaibani commended HBMSU’s leading achievements of which the UAE and the entire Arab World are proud. He added that HBMSU, under the leadership of H.H. Sheikh Hamdan Bin Mohammed Bin Rashid Al Maktoum, Crown Prince of Dubai and President of the University, represents a model of scientific, research and academic excellence in re-shaping the present and future landscape of education by adopting state-of-the-art technological innovations. “We would like to thank Dr. Mansoor Al Awar and members of the HBMSU faculty for their kind welcome. We wish the university further success and distinction in its proactive efforts to consolidate the culture of Smart Learning in the Arab World,” Dr. Al-Suhaibani concluded.