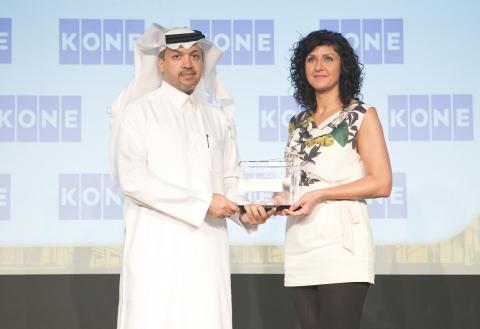 December 14, 2014 - Cayan Group, one of the Middle East’s leading real estate developers, has bagged the prestigious ‘Tower Project of the Year’ at the 10th Construction Week Awards for its landmark residential property Cayan Tower, officially declared by the Guinness World Records as the globe’s tallest twisted tower standing at 307 meters (1,007 feet) high. Ahmed Mohammed Alhatti, President and Chairman of Cayan Group, received the award on behalf of the company during a ceremony held recently at the JW Marriott Marquis Hotel Dubai.

Cayan beat four other finalists that vied for the category’s top honor during this year’s competition. The event celebrates the achievements of the region’s construction contractors in recognition of their individual excellence, corporate prowess, and project success. 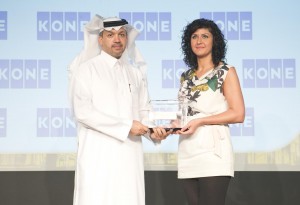 Designed by renowned architectural firm Skidmore, Owings & Merrill, Cayan Tower is situated at the heart of Dubai Marina to provide great views of the sea, marina and The Palm. Each floor is rotated by 1.2 degrees to achieve the full 90-degree spiral and creates the shape of a helix. More than 80 per cent of the residential units have already been handed over and occupied. The Tower offers a luxurious lifestyle and provides residents with an outdoor infinity pool and whirlpool, a fully equipped state-of-the-art gymnasium, a world-class luxurious spa, and kids’ play area.

Ahmed Mohammed Alhatti, President and Chairman of Cayan Group, said: “Winning the ‘Tower Project of the Year’ award fully demonstrates our commitment to develop unique and innovative real estate projects that leverage our capabilities, knowledge and creativity. Cayan Tower is the epitome of that commitment and the level of excellence that we adhere to in all our projects. We also put a high value on this recognition given that the competition’s jury was composed of our industry peers. We are even more inspired to live up to their expectations and continue to deliver exceptional projects that will continuously set new industry benchmarks.”

Cayan Tower, whose construction began in 2006, joined the roster of Dubai’s impressive city skylines when it was inaugurated in 2013. Cayan’s other iconic Dubai developments include Silverene, The Jewel, Dorrabay, Cayan Business Center, and La Residencia Del Mar. Aside from Dubai, Cayan Group holds offices in Riyadh, Saudi Arabia where it is developing several luxurious projects such as Layaly compound and Samaya project. In Lebanon, the company is also involved in the construction of Broumana Lands, an upcoming project situated in Broumana Village. Cayan projects estimated at SAR 10 billion cover a wide spectrum of developments, from exclusive residential property to commercial projects across the region.

Since its inception, Cayan Group has evolved into one of the Middle East's leading Real Estate developers and has earned a reputation for developing projects that invariably receive international acclaim. The company maintains offices in Riyadh, Saudi Arabia and Dubai, UAE. Cayan Development’s portfolio features high rise buildings like residential complexes, commercial towers & centres, hospitality projects and multipurpose gated communities. Cayan Group has been in the Real Estate development business since 2004 and has successfully achieved its targets and development goals. Its highly qualified team adds value and quality together with unmatched customer satisfaction. Cayan Group enjoys a superior market reputation, which shall be the drive to continue its improvement and success.