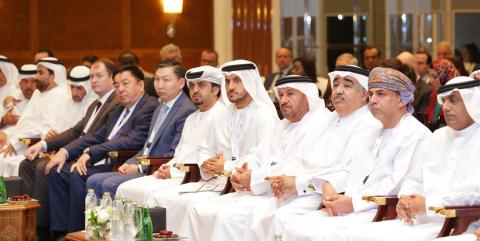 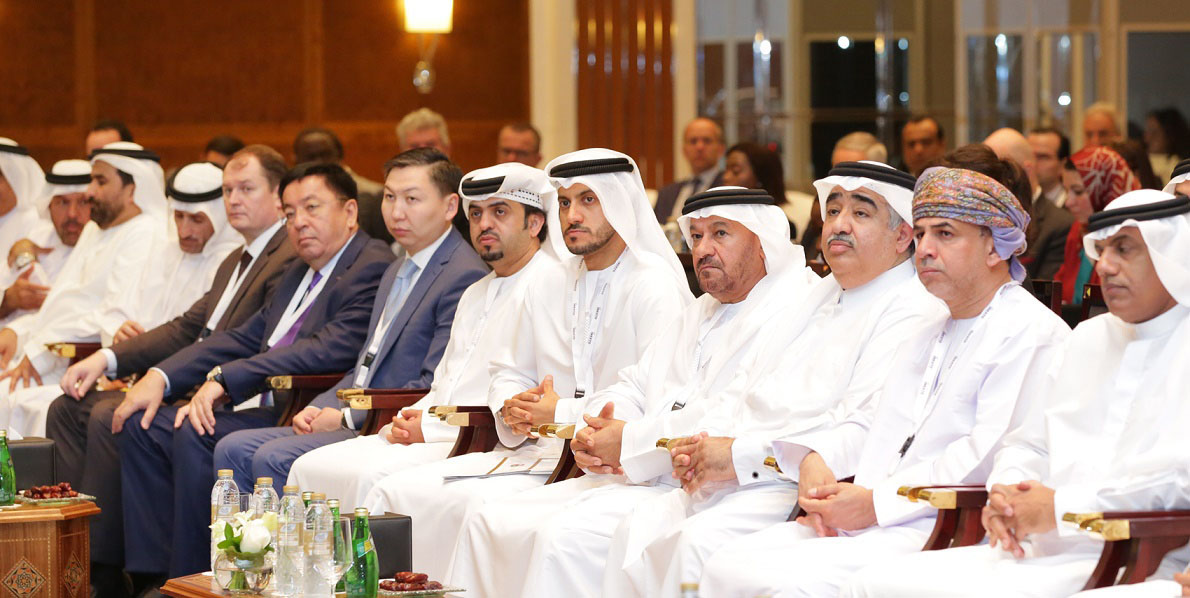 The 7th Global Trade Development Week kicked off on (Monday, October 31, 2016) and will run for three days until November 2 at the Jumeirah Emirates Towers Hotel in Dubai under the patronage of the Ministry of Economy in partnership with the Federal Customs Authority (FCA).

The latest edition of Global Trade Development Week will discuss issues related to customs programs and better facilitation of international trade. It will also deal with trade agreements without borders and ways to ensure the safe management of global supply chains in the presence of about 800 leading personalities, decision makers and representatives of customs agencies from more than 100 countries. 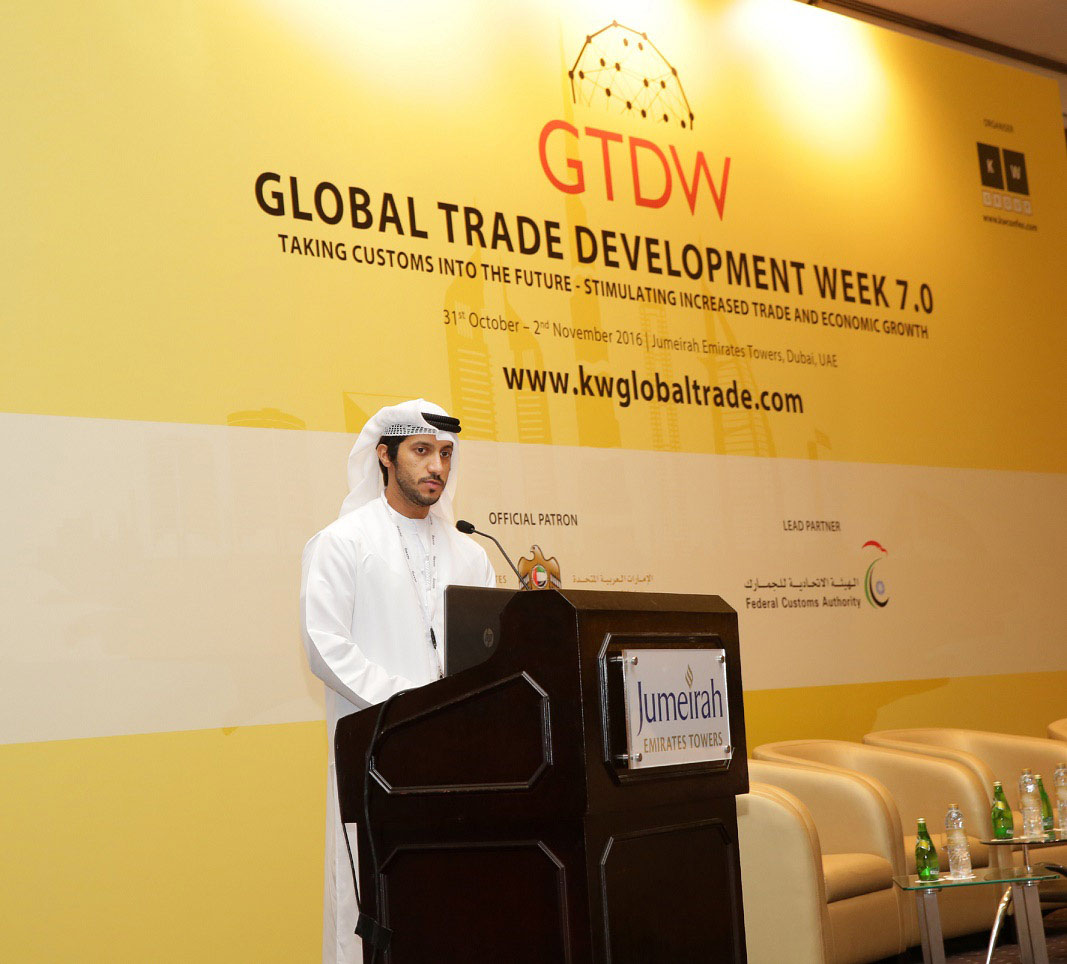 H.E. Al Kait relayed H.E. Al Mansoori’s message that the current session of Global Trade Development Week is of great importance considering the increasing challenges being faced by the global economy to achieve a smoother flow of cross-border trade and ensure the safe management of supply chains worldwide. He also emphasized the necessity of continuously working to strengthen communication and cooperation to derive the best solutions for removing all obstacles to the development and facilitation of international trade.

H.E. Al Kait also shared H.E. Al Mansoori’s thoughts that the UAE prides itself on being the first among Arab countries and one of the first in the world to ratify the Trade Facilitation Agreement with the World Trade Organization, sending a clear message of its active role in stimulating regional and global trade movements.  The Minister, he said, views Global Trade Development Week 7.0 as an annual event in the UAE that embodies the vision of the wise leadership to strengthen the country's position in regional and global trade — reflecting the country’s intensive efforts to promote the role of innovation as a key engine for achieving competitiveness and sustainable growth in sectors related to foreign trade.

H.E. Al Mansoori also conveyed through H.E. Al Kait that the non-oil sectors now account for about 77 per cent of the UAE’s gross domestic product (GDP), and that the Emirates has become the second largest Arab economy, ranking first in the region in terms of Foreign Direct Investment (FDI) flows. The Minister noted that the UAE accounts for more than 27.5 per cent of total incoming investments to the Arab region, and 33 per cent of total outgoing investments.

The Minister also wished to emphasize that trade opportunities remain vibrant in the country thanks to its proximity to other Gulf markets and the wider Middle East and North Africa (MENA) region, as well as its role as a vital link to the major trade routes intersecting Asia, Europe and Africa.

H.E. Al Mansoori concluded his message by saying that the volume of the UAE’s non-oil foreign trade grew by 10 per cent in 2015 over the previous year, totaling AED 1.75 trillion AED (about USD 467.4 billion), inclusive of free zone trade.

H.E. added that owing to its advanced infrastructure, robust banking system, political stability as well as the presence of more than 36 free zone areas involved in a variety of disciplines, the UAE will continue to push the competitiveness of its commercial sector forward. He noted that the country is a gateway to around one-third of the UAE’s foreign non-oil trade which totaled around AED 500 billion in 2015.

The Minister also referred to new horizons for economic growth being opened by Dubai’s upcoming hosting of Expo 2020, which will introduce more infrastructural modernization and developments to the logistics services sector as well as significantly trade and investment.

H.E. Al Mansoori added that development projects do not stop there, pointing to the Union train project, the establishment of smart cities, and the extraordinary developments in the UAE’s aviation and tourism sectors – all of he said which are considered as factors for the sustainable development of the UAE’s business and investment environment and the enhancement of the country’s position as a regional and global trade hub.

He then relayed his hopes that the Global Trade Development Week be further developed as a global platform for discussing and debating the smooth facilitation of international trade movements. 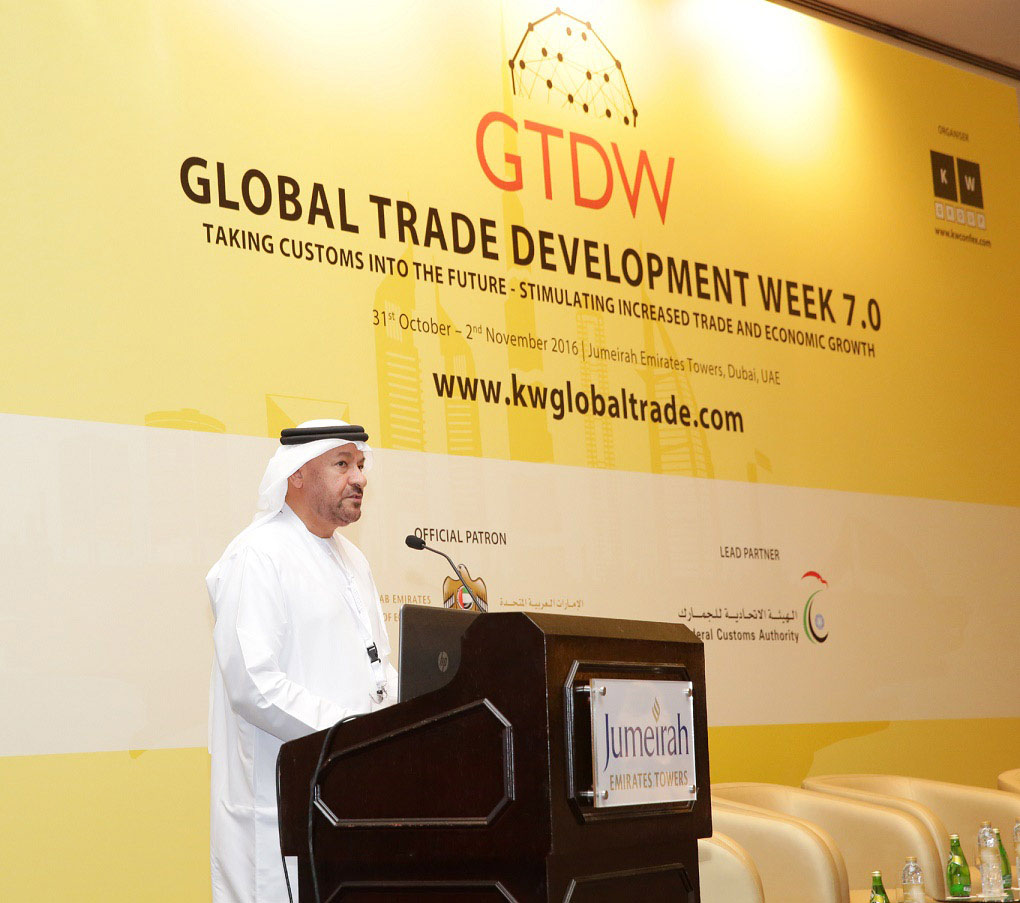 For his part, H.E. Al Kaabi said that the huge growth in global trade over the previous decades has presented a major challenge for the World Customs Organization in terms of coordinating border management, removing tariff barriers, and reducing customs clearance times.

Al Kaabi added that the World Customs Organization is currently facing several complex challenges posed by increasing security risks that coincide with the global economic slowdown and the decline in trade movements which he explained can be traced back to influences from the global financial crisis of 2008. He noted that new visions and strategies will be required to come up with the best solutions.

Al Kaabi also pointed out that the World Trade Organization recently toned down its original forecast for global trade growth in 2016, warning that the rate will be the slowest since the financial crisis of 2008.

Al Kaabi added that per the organization’s latest estimates, global trade will grow at a rate of 1.7 per cent this year compared with the previous estimate of 2.8 per cent in April 2016 because of the slowdown in the GDP and trade growth of developing economies such as China and Brazil.

Alkaabi said that the organization also reduced its estimates for 2017, noting that trade growth will range between 1.8 and 3.1 per cent during the year versus the previous estimate of 3.6 per cent.

The Commissioner added that the UAE’s customs work continues to progress, clearly reflecting the country’s foreign trade growth and facilitating robust trade with other countries.

Al Kaabi further pointed out that the Federal Customs Authority had succeeded this year in bringing the UAE’s customs work to a new simplified phase for customs procedures as well as strengthening customs control of border crossings.

He stated as well that the UAE’s customs sector will witness the launching of several development projects within the coming period which will raise the quality of customs work to the highest international levels. The most prominent of these projects, he shared, is the Authorized Economic Operator, a federal program that will link the UAE’s trade and customs sectors with the rest of the world.