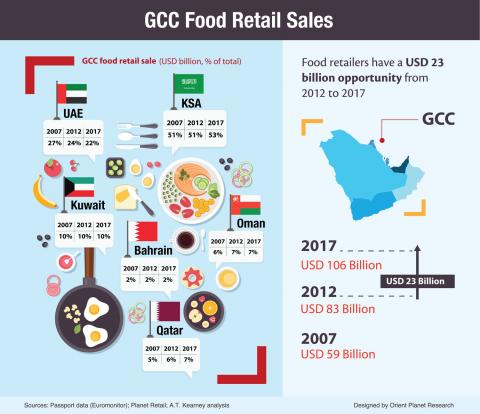 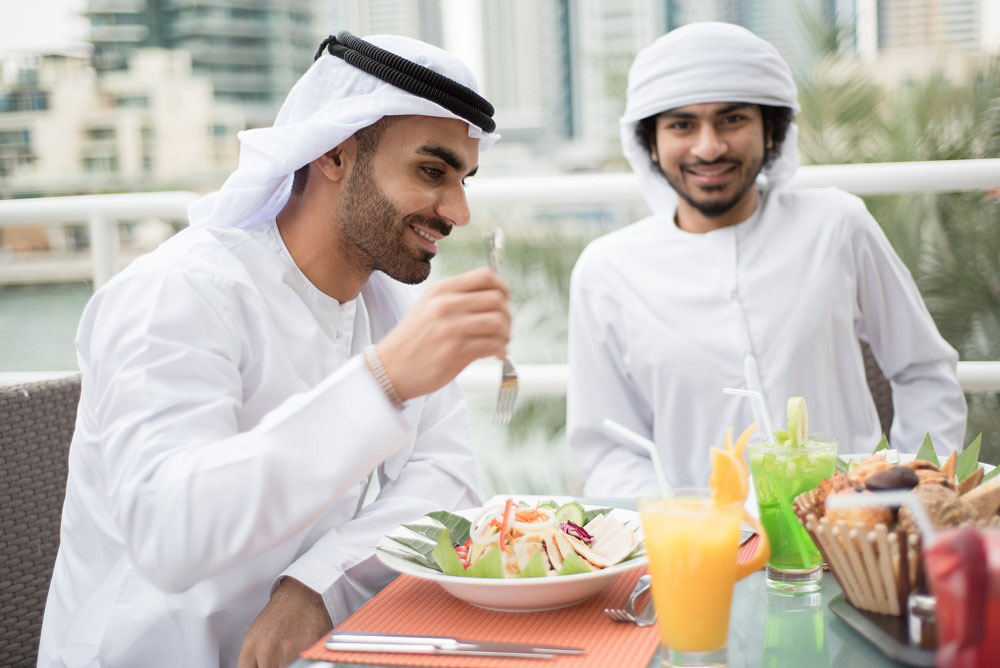 The GCC’s booming population and growing tourism arrivals will continue to influence the exponential development of the region’s food and beverage (F&B) industry in the coming years, according to a report on ‘Feeding the Growing Appetite of the GCC F&B Market’ recently released by Orient Planet Research, an Orient Planet Group venture. Citing an industry study, the report reveals that food consumption in the region alone will likely reach 51.9 million metric tons by 2019, rising at a compound annual growth rate (CAGR) of 3.5 per cent between 2014 and 2019.

The report was released to examine the growing regional F&B industry in light of the GCC’s continuous population growth, prevalently young demographics, and influx of tourists from all over the world. In terms of their booming population, the Arabian Gulf cities will host 85 per cent of the region’s population by 2020 as predicted by the United Nations, with urban populations growing fastest in the UAE and Qatar.

Tourist arrivals also account for a large and growing portion of the F&B demand, particularly in Saudi Arabia and the UAE. Both countries annually receive more than 25 million tourists on average. In Saudi Arabia, religious tourists are the largest group of visitors who regularly flock to the Kingdom to perform Hajj and Umrah. On the other hand, leisure and business or both are major factors that are driving tourism in the Emirates, with the number of arrivals expected to substantially expand thanks to Dubai’s successful bid to host Expo 2020. During its six-month run, Expo 2020 is forecasted to draw over 25 million visitors on top of the government’s projected annual international visitor traffic of 20 million by 2020.

Furthermore, the Government of Dubai has launched intensive efforts to further drive tourism in the emirate. Both Dubai Shopping Festival and Dubai Food Festival (DFF) form part of these strategic initiatives designed to celebrate and enhance Dubai’s and the UAE’s global status as the region’s gastronomy capital.

Overall, regional tourist inflows are expected to accelerate at an annual average growth of 7.8 per cent between 2014 and 2024, adding to the demand for food and fuelling the dining-out trend across the GCC.

Further, with the GCC’s limited food production due to its arid climate, less arable land, and water scarcity, the report sees importation to be continuously on the upswing just to meet the food demand. As it is, about 70 per cent of food products in the GCC are imported, with cereals comprising 55 per cent of total imports, reveals a recent Frost & Sullivan analysis.

Imported foods are locally processed for consumption and re-export, with the UAE considered as one of the leading food importers and re-exporters to the wider region. Significant opportunities have subsequently opened up in the region, particularly for allied industries such as processing machinery, packaging and logistics. The GCC as a result plans to increase investments in the manufacture, final packaging and distribution of goods.

Nidal Abou Zaki, Managing Director, Orient Planet Group, said: “The flourishing regional F&B industry is offering a myriad of opportunities to global investors looking to widen their horizon in the GCC. The demand is increasing without let-up and there lies bright business prospects for F&B companies. Today’s marketplace, however, is not just overcrowded but is also highly competitive. Entrepreneurs must therefore ensure that their products and services are unique and of the finest quality possible, complemented by a reasonable price point to have a competitive advantage. Our report examines various trends affecting the regional market that can serve as a guide to companies seeking to carve their own niche here. Ultimately, what is important is that an entrepreneur must always bring something new and of added value to consumers in order to succeed.”

One of the latest trends dominating the market is the increasing health awareness and taste for a westernized palate – which is changing the region’s dietary habit and stimulating the demand for organic and international foods. The report cites projections showing the GCC’s organic food market hitting the USD 1.5-billion mark by 2018.

The increasing interest in organic and other natural foods in the region demonstrates that consumers here have become more aware of what they are eating and are in fact gravitating towards nutritious meals with due consideration to their total health and well-being. Such an important shift in consumer priorities reflects their increasing preference for more environment- friendly and health conscious food and beverage.

Aside from organic food, packaged food and food retailing are also emerging as major trends in the GCC F&B industry. Additionally, opportunities for allied industries such as processing machinery, packaging and logistics will remain vibrant as long as imported foods are continuously processed locally for consumption or re-export, the report adds.

Amidst the bright prospects, the report maintains that businesses entering the GCC market must have the right channel, the right partner, and the right positioning to smoothly and effectively establish their presence in the region. 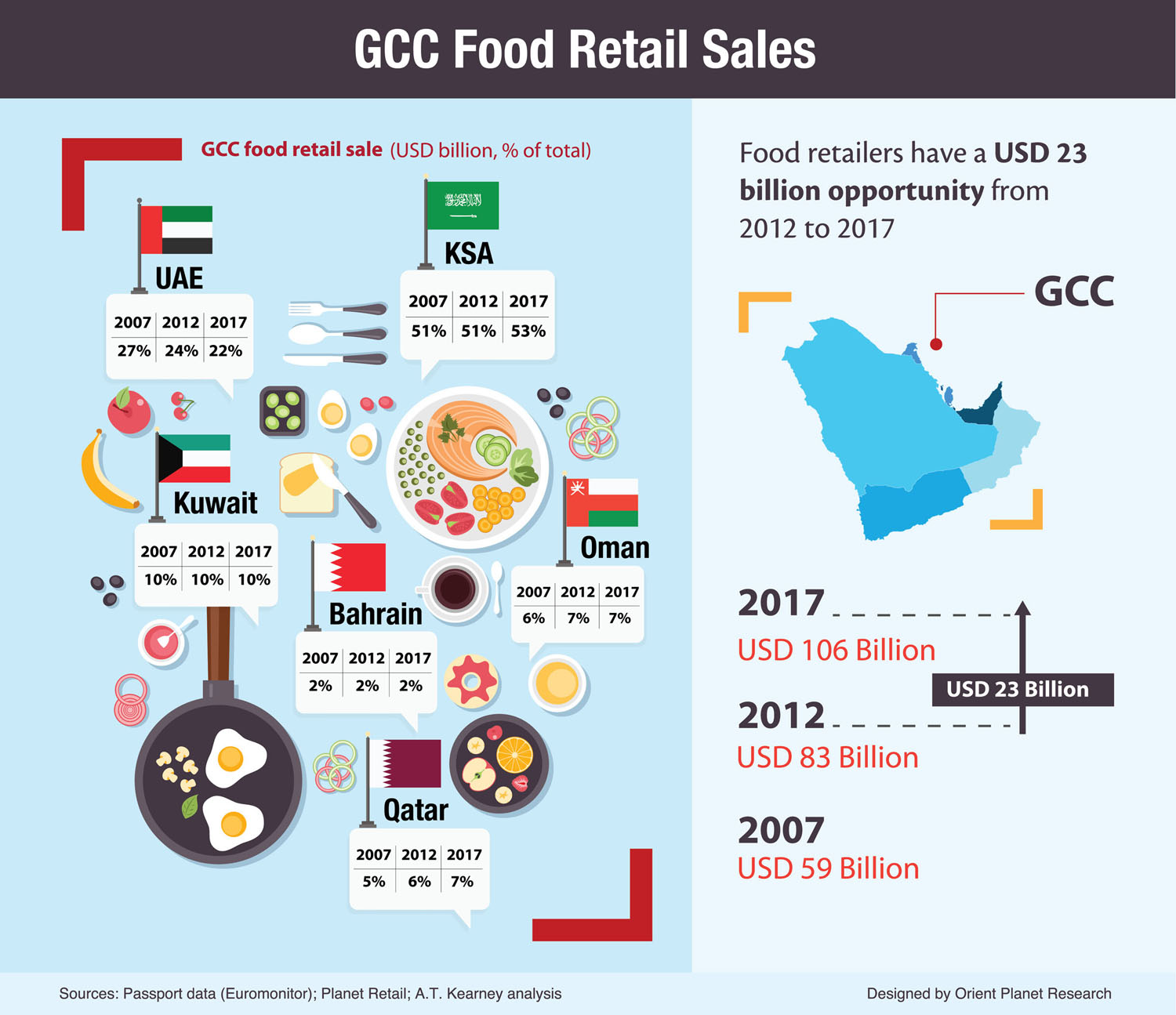