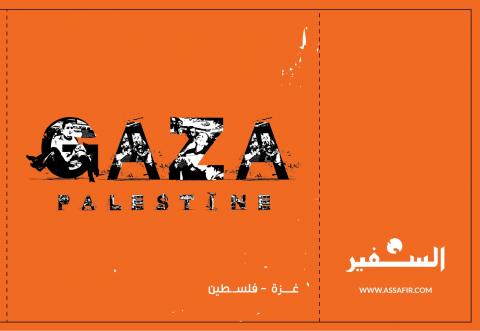 Beirut, 18 February 2015: “Nothing was left of his house in the Shuja'iyya neighbourhood; nothing but this window” “A playground on the stage of death: A Palestinian boy found some time to ride a bicycle near the police station that was destroyed by Israel in Rafah” “Ten… It’s the number of the wars on Gaza since 2001; the most enduring genocide in the history of mankind”

In collaboration with the Ministry of Culture, As-Safir newspaper launched an international campaign under the name of “GAZA Put into Words” in a press conference held at the UNESCO Palace Beirut on Wednesday February 18, 2015, under the patronage of H.E. Mr, Roni Araiji, Minister of Culture and the presence of H.E. Mr. Ramzi Joreige, Minister of Information, H.E. Mr. Elias Bou Saab, Minister of Education and Higher Education and H.E. Mr. Mohamad Fneish, Minister of State, in addition to a number of diplomats and media representatives. After the press conference the “GAZA Put into Words” photo exhibition was launched and will take place at UNESCO until Saturday, February 21st, 2015. The main idea of the project is to reveal the unknown stories of Gaza in Palestine hidden behind numbers and letters, in the past and in the present. The tragedy of Gaza (and of Palestine as a whole) did not start in a summer morning in 2014; it goes back more than sixty years. “I write about Gaza and for Gaza… because what is written in blood cannot be erased by Israel…” This is the vision behind the project entitled: “Gaza Put into Words” The aim is to commemorate the tragedy of Gaza, the Palestinian region that has suffered the most from war, and the determination of its people; It is also to shed light on the tragedies, some facets of which we were able to see upon making our choices. In fact, each letter has a story and each number has a meaning that can show the coming generations the truth of what happened and of what is still happening in Gaza, Palestine. The goal is to bring together celebrities, social activists, stakeholders, and supporters of Gaza and its people so that they would tell those stories on the media and on social networks in order to share their content and give an account of this suffering to the world, in solidarity with Gaza and its Palestinian people.