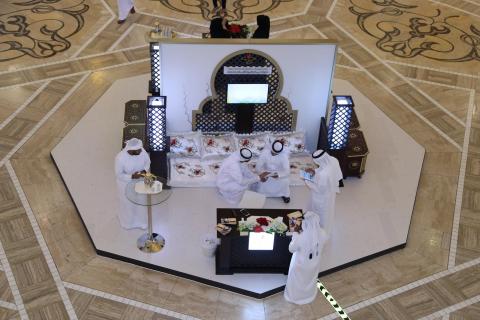 [UAE, 16 October, 2014] - Dubai World Hospitality Championship 2014 (DWHC 2014), the latest event positioning Dubai as a leading international destination for hospitality and tourism, has recently provided a catering services to one of the highest places in the world. DWHC served Arabic coffee along with specialty Emirati desserts to over 15,000 visitors on the 124rd floor of Burj Khalifa, the world’s tallest tower, during the festive occasion of Eid Al Adha.

The successful catering demonstrates the DWHC’s strive for excellence and creativity. It is also a reflection of Za’abeel Palace Hospitality’s commitment to promote the UAE’s local cuisine through its international championship platform – DWHC, positioning the country and Dubai as a world leader in the hospitality sector. 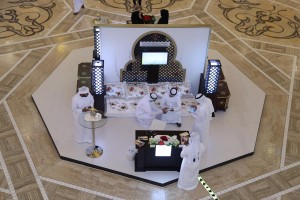 H.E. Ahmed Bin Hareb, President of DWHC, said: “Dubai World Hospitality Championship 2014 is a strategic event designed with an aim to position the UAE as a regional and international leader in the hospitality sector. In line with the vision of H.H. Sheikh Mohammed Bin Rashid Al Maktoum, UAE Vice President and Prime Minister and Ruler of Dubai, the Championship is being organized to create global awareness about the UAE’s traditional cuisine as well as its long-established hospitality. It is indeed a great honor for us to announce that we have successfully organized the highest catering service in the world. Serving to 15,000 guests at the 124rd floor of Burj Khalifa is a remarkable achievement for Za’abeel Palace Hospitality, DWHC and the UAE. We are confident that we will continue to create many more such benchmarks during the DWHC 2014.”

In addition, DWHC team offered Emirati catering services at the Dubai International Airport for the returning Haj pilgrims from the Kingdom of Saudi Arabia. The Haj pilgrims were in for a happy surprise when they were received with a warm welcome and offered traditional Emirati sweets on their return such as Sago and Khabees; as well as the traditional Emirati coffee (Gahwa).

Ahmed Bin Hareb expressed his gratitude and appreciation to sponsors Dubai Mall and At the Top Burj Khalifa--Diamod Partners of the DWHC 2014 who provided key support for the second cycle of the championship. The Burj Khalifa played a very important role in cooperating with DWHC to provide hospitality for more than 15,000 visitors while Dubai Mall also played a prominent role in hosting two platforms to provide Emirati hospitality to visitors.

“We have planned a series of activities to promote DWHC 2014 that included the catering service at the 124rd floor of Burj Khalifa and Dubai International Airport. We were extremely happy to offer a taste of traditional Emirati desserts and a glimpse of experience rich Arabic hospitality while creating a world record. It is a daunting task to cater to such a huge number of people over a period of three days at the 124rd floor because of several issues including logistics. We overcame all our challenges because of our perseverance and our biggest reward is the tremendous appreciation and encouragement received from the visitors of Burj Khalifa. This activity will run until the 28th of October 2014.” concluded Hamad Alghafri, Public Relations Manager at DWHC.

Dubai World Hospitality Championships will be held from October 30 to November 1, 2014 at the Sheikh Saeed Halls of the Dubai World Trade Center. It is organized by Za’abeel Palace Hospitality in cooperation with the World Association of Chefs Societies (WACS) and The Emirates Culinary Guild (ECG). The championships consist of four competitions, including International Competition, Emirati Competition, Gulf Products Competition, and Hospitality Sector Competition, aimed at highlighting the rich heritage and culture of the UAE and Gulf region.

Under the directives of His Highness Sheikh Hamdan bin Mohamed bin Rashed Al Maktoum, Crown Prince of Dubai, Za’abeel Palace Hospitality organises the Dubai World Hospitality Championship 2014, an initiative that seeks to spotlight Dubai amongst the finest multicultural culinary destinations of the world.

Supported by the World Association of Chefs Societies (WACS), the Emirates Culinary Guild (ECG) and Dubai World Trade Centre, the debut edition of the championship will host a culinary museum and a model heritage village displaying traditional handmade products and offering popular Emirati food for sampling. The event will offer free access to the public.